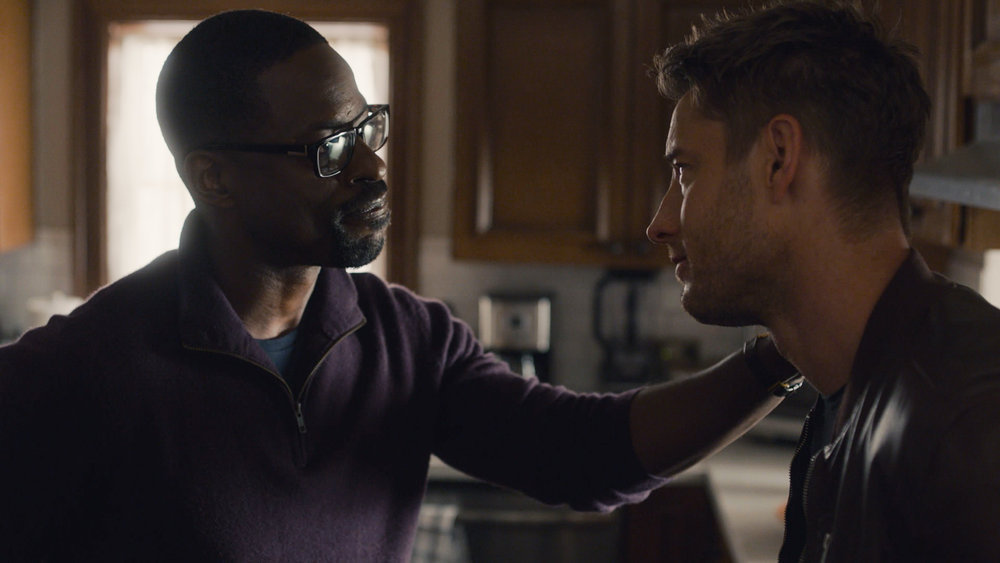 Fans of This Is Us have waited patiently for brothers Randall and Kevin Pearson to face each other once and for all. In the season finale of Season 4, the brothers exchanged unforgettable words of anger, as the tension in their relationship finally cap-sized. As Season 5 progressed, fans waited for the moment that the two would sit down and hash things out.

Writer, producer, and director Kay Oyegun helped make their face-to-face a reality, as she directed the “Brotherly Love” episode. Oyegun has been a crew member on the show since Season 1 and made her directorial debut for This Is Us in an earlier episode in Season 5 called “Birth Mother.” The episode showcased Oyegun’s talent for getting to the raw, deep emotions of the characters. Her keen eye for storytelling and studying the brothers made the moment magic when the two finally faced off in “Brotherly Love.”

Oyegun tells Black Girl Nerds all about her directoral process.

You made your This Is Us directorial debut with one of the most popular episodes of the series and now you’ve directed the most recent episode, “Brotherly Love.” Tell me about your process for directing this episode.

I knew about this well in advance as far what the episode was going to be about, giving notes and making adjustments and all that kind of stuff, working very closely with John Dorsey and Dan Fogelman, so that was great. Then you break the script, you make adjustments, and you then go into prep. Prep is everything from location scouting to casting to sound, music and all that good stuff. Then you work with your actors. I never worked with a couple of our particular cast members before so I wanted to see if I could get ahold of people earlier, in advance, and work with them over Zoom. So I did that, which is not necessarily traditional, but it’s also a little different. A lot of our directors who come in are directors professionally, and so they get a script a week beforehand and they have to go through the whole process. But being on the show, there’s a lot more access you have. You know the story at least beforehand, so it’s a position that I’m very grateful for.

You’re a very outspoken follower of Christ. Tell me how that influences your work.

Tell me about working with the cast and crew of This Is Us. What do you love about it?

They are absolutely phenomenal. They are some of the most hard-working, talented, genuine, kindly, leading-from-the-heart group of people on the face of the planet. I’ve been so fortunate to be on the show since Season 1 so I’ve known quite a few of them for quite a bit of time. It just feels like family. It feels like home. These are people who I’ve known since 2016, so we’re just continuing on to do our jobs. So you’re engaging with people that are family. Working with our cast and crew is just like a natural sweet spot and natural kind of home to be in.

“Brotherly Love” showed an even more exhausted side of Sterling K. Brown’s character, Randall — exhausted with explaining racism. Why was important that the message was conveyed that way?

The exhaustion of the past was something like, “Okay. I don’t feel like dealing with this right now. Let’s have this conversation later.” I think we’re used to always putting off the inevitable so those exhaustions are a release valve to put things off until later. But I think the later finally landed. Whatever exhaustion he was feeling, whatever exhaustion Kevin was feeling, they had to push through it because they were sort of in it. There was no “Okay, let’s table this for tomorrow.” It’s like, no I’m standing in front of you. Let’s roll up our sleeves and let’s figure this out and let’s go.

I think it’s a combination of despite that they had the season finale fight, it was something that has been brewing for a long time. Randall is controlling, and Kevin was irresponsible. Those are topics that we touched on many times. On the second episode of Season 5, Randall apologizes to Rebecca for strong-arming her to go into the trial. And so they’re family at the end of the day. They’re always going to rub elbows and rub shoulders with their family members, and sometimes those interactions are going to be more tricky than others. But I think for this you’re watching two brothers who have had some unspoken tension. I think we wanted to speak to the actual tension that they’ve had.

The one thing that we don’t do is have an open space for the conversation about the actual elephant in the room and how it comes to their dynamic, which we’ve touched on in the past before. But it was one that we just thought was a really interesting opportunity to be like, “Neither of you can go anywhere. Can you face things and actually push through it or will one of you chicken out and run off?”

How does it feel to be working in this industry and doing what you love as a Black woman?

It is one of the most incredible, affirming, gratifying, humbling experiences on the planet. I am so fortunate. I thank God every single day. I could not tell you how grateful I am. It’s just one of those things where to be able to be on set and to be able to collaborate with some of my favorite people and share ideas and see our vision come to life, it’s such a rare gift and I’m aware of every single moment of it. I take none of it for granted. I pray for it for other people.

This Is Us airs Tuesdays at 9pm ET on NBC.