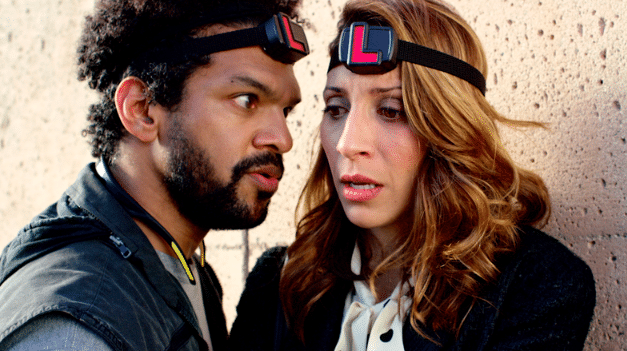 To combat the ever-growing scourge of mass shootings, in the near future the American government criminalizes introverts and loners in a new war: the War on Loneliness.

When identified, loners are placed on a watchlist and forced to wear an electronic headband emblazoned with the letter “L” that will shock them if their loner behavior gets outside of regulated bounds. Loners are required to announce themselves to everyone in a 100-yard radius, as well as attend a weekly support group session Lone-Anon where they get counseling for their illness. Eryc Tramonn’s Loners follows seven loners as they find themselves increasingly mired in a government plot beset by an unknown outside agitator.

Because the government well knows that the program doesn’t work — even in the near future they are unwilling to enact common sense gun control — they have been suppressing data about a dramatic increase in shootings since the War on Loneliness began. The worst part? None of those mass shooters have yet to be registered loners. The feds decide to take matters into their own hands to prove the program is vital and necessary, even as an enigmatic figure has designs to disrupt the entire thing.

With its obvious reference to the various internal wars the US government is fighting (such as the War on Drugs), Loners highlights the absurdity of these actions, in particular, the fact that these kinds of wars are unwinnable and often serve the opposite function. The War on Drugs increased drug use, just as the War on Loneliness increased mass shootings. And the Second Amendment is clearly as “sacred” in a Loners’ future as it is in ours since the government begins profiling and rounding up individuals before properly restricting open access to guns. But the social and political satire doesn’t stop there.

When loner Dabney (Neil McGowan) moves into his new apartment, he introduces himself to his new neighbors as mandated by law. “What are you? Some kind of person-hating freak?” his skuzzy neighbor Larry (David Ury) asks with pure disgust, then promptly revealing that he’s a registered sex offender against children. In Loners’ world, it’s the introvert who is the social pariah and reprobate, not an actual pedophile. During one of the Lone-Anon sessions, a priest (Tucker Smallwood) comes in to speak to the group, pointing out how the words “introvert” and “pervert” are similar in spelling. Father Monty goes on to say that he cannot be sure if introversion is a sin or if it is curable. So to be on the safe side, “Make a friend, or burn in hell.” This vein of social commentary hits deep considering the Catholic church’s history with child-molesting priests.

It is illegal for two loners or more to be in the same room together — unless it is the obligatory group therapy. The government is concerned that loners will plan an insurrection if they have too much social contact with other loners. If a loner doesn’t get enough social or human touch time in their week, they can be whisked away by federal agents to the concentration camps around the US in undisclosed locations. Headed by Lincoln Chalk (Brian Letscher), the group of Lone-Anon peers — minus the extreme loner Jeremy (Khary Payton) who seems to have more mental illness than introversion — have been holding a weekly poker night where they sit around a table for two hours. Not playing cards, but exploiting a loophole in the electronic surveillance system that monitors their social contact. This allows them to not have any other social contact for the rest of the week without calling any attention to themselves. The irony is fantastic here and points to the terrifying ways that a government can infringe on a person’s rights once a war of any kind has been declared.

Loners goes into excellent Breakfast Club territory as this group of misfits on a government watchlist start actually communicating with each other and becoming friends. Each of them had been going through their own issues, big and small, which required moments of withdrawal from the world. Sirese (Melissa Paladino) went through an ugly divorce and no longer felt like socializing. Lincoln was living in the shadow of past successes he couldn’t recreate and didn’t feel like talking about it. Ed (David Christian Wellborn) had been under house arrest for his role in a pyramid scheme. Tanner (Tyson Turrou) prefers plants and gardening to people. Librarian Frannie (Brenda Davidson) enjoys the company of books more than anything else in the world. Dabney is the only involuntary loner: he wants friends, but his dry personality and penchant for TMI about his IT job repels people. The comedic timing in Loners is excellent, which only highlights these serious moments of human drama and pathos.

As weighty the social commentary is, Loner writer Neil McGowan infuses this film with a compassionate and comedic touch that perfectly balances the heart of this dystopian vision of America. Much like in The Purge franchise, which chose to color its dystopia in blood rather than campy humor, the government in Loners is well aware of their failure. Instead of trying something that might actually work, they go ahead and manipulate the mess they made as if that will be the thing that cleans it up. Of course, this is at the expense of people they are claiming to help. The jabs against the current political regime in this country are precise and scathing, even using the “very fine people” and “both sides” rhetoric we keep on hearing. 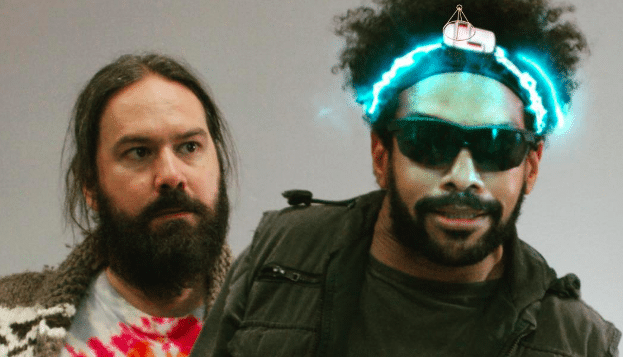 In many ways Loners is a love letter to introverts. Not everyone needs or wants to be around people all the time — and that is okay. As Serise says, “We have to fight for our right to be alone. Together!” Using introverts and introversion as the target of government watchlists only heightens the absurdity of similar government policies that exist in real life, such as the lengths the US government (and the NRA) will go to uphold the Second Amendment — arming teachers and requiring bulletproof backpacks for kids rather than actually protecting American lives through even basic gun control policies. The cherry on the irony in Loners is that registered loners on the watchlist are not allowed to buy or carry guns, and the personal freedom given to people under the Second Amendment doesn’t apply to loners. Brilliant writing and conceptual framework, indeed.

Social satire in fiction exposes many of the real-life issues relevant to our world today, and Loners is no exception. It takes exceptional talent to rework the horrors of America’s current political regime into such a funny story. Loners is the first time in ages I’ve actually been able to take a step back and laugh about politics (and life) for a split second. I’d almost forgotten what that felt like.

Memphis, TN is Seeking To Be a Center for Black Indie Film