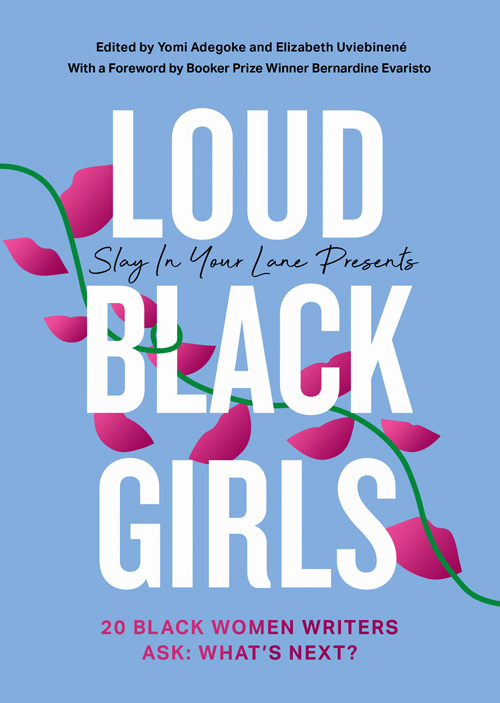 When I was approached about reading Loud Black Girls: 20 Black Women Writers Ask: What’s Next?, I was excited about the premise. Loud Black Girls is an anthology of essays of Black British writers curated by Yomi Adegoke and Elizabeth Uviebinene. The essays explore each writer’s experience as a Black woman in these turbulent times and how we can navigate the next chapter.

I’ve had a recent fascination with the Black diaspora. To my chagrin, until a few years ago, I’d never really thought too deeply about it. I did well in my history courses in school and I knew that the Columbian Exchange was an accelerant in the spreading of African people across the globe, and I knew logically that Black people were everywhere, but there was a cognitive dissonance about the reality of Black people really being everywhere. Of course, I knew “the Sun never set on the British Empire” (because so vast was its usurping colonizing efforts), but I never thought about Black people existing in the lands of the colonizers.

Can you really fault me though? Seldom had I seen a Black person depicted in a way that wasn’t in some form of enslavement or oppression (I’m looking at you, 20th century movie makers). I have been fortunate enough to meet other Black people with many different nationalities, and I was struck by some of the differences. I knew all Black people weren’t the same, but as I watched them practice ancestral traditions and speak their mother tongue, it really hit me. Black people are not all the same.

In reading the book, I found that I was not alone. The opening essay “Finding Myself in Britain” by Candice Braithewaite details how she was born in the UK and raised in Nigeria. Upon returning to the UK as an adult young in her career, she was surprised at the misconceptions regarding Nigeria. She thought that everyone had learned history same as her.

Braithewaite’s parents tucked away their native tongue Yoruba so as not to “taint” the English accents of their children, similar to the way my family tsk’d away my use of AAVE in mixed company. Not the same, but similar. I enjoyed the read as a look at someone who is in touch with their ancestral home. As an African-American-Descendant-of-Slaves (ADOS), I may never know of my true lineage (short of a 23 and Me test and a special favor from Henry Louis Gates).

Being a part of the diaspora, we know that we all have the same roots that track back to Africa. But just as a tree has many branches, stems, and leaves, so does the diaspora. Every fork in the tree having a different history creates a distinct subculture. Though all the branches are still a part of the same tree, they each exist independent from the other.

Being Black is often considered a monolithic all-encompassing culture. While I revel in the memes where it seems that we have all lived the same lives and had the same mother (who, by the way, is not boo-boo the fool, nor is she “one of our little friends”), I know that the Black experience is so much extensive than it is ever considered by the public at large.

I feel fortunate to exist in an era of unprecedented communication. I have had the benefit of learning the stories from those who’ve lived it and hearing it in their own voices. There are more frank discussions being held without the censorship that comes with publishers and media conglomerates of years past.

The book opens with a quote, “Black women will always be too loud for a world that never intended on listening to them.”

I have a playlist to amp me up for things when imposter syndrome sets in. The first song on that playlist? “Ego” by Beyoncé (formerly the Ego remix with Kanye West…but nope!). If you aren’t familiar with the song, it has the lyric, “I walk like this, because I can back it up/ Ego so big you must admit I got every reason to feel like I’m that chick**.” (Will there ever be a feminist conversation in which Beyonce is not relevant? Unlikely.)

I listen to those songs to combat the messaging that little Black girls receive that they should make themselves small. Imposter syndrome is real, and I’m sure there are a million of other Black girls out there who have had to reconcile who they truly are with the strict box in which we are permitted to exist.

I’m excited that the wide-release of Loud Black Girls can make these conversations attainable by the masses.

There are so many histories, cultures, and iterations within our Blackness. Sadly, however, the most prevalent experience shared among us is our universal trauma. We experience all the microaggressions, we fight the same stereotypes, we have to reinforce ourselves against a barrage of misogynoir. Loud Black Girls explores the different ways being Black has shaped the lives of these women.

The anthology is very inclusive, but hey isn’t that the nature of Black women? There are essays written by mixed race, gay, trans, single, married Black women. Talk about intersectionality.

Please for one second, don’t believe that this book is a “woe-is-me” lamentation about the plight of being a Black woman. No, that’s not it at all. These are stories about women navigating the best they can a world that doesn’t consider them. Reading Loud Black Girls was a great learning opportunity as I found out about the experiences of Black Brits. There are these moments when we see the similarities between the branches that take us back to the root, especially in the moments relating to extended family.

Essays in the book discuss the nuances of being a Black woman. There are so many things that a Black woman could be, if we dare to exist outside of the small constructs in which we are permitted to exist.

Loud Black Girls is so named for the stereotype of Black women being “too”: too loud, too spirited, too …much. The essays are thought-provoking from topics of financial independence, racial identity, gender roles and inclusivity. If you ask, What’s next? I foresee a lot of women commanding their due respect…why, you may ask? ‘Cuz we can back it up.