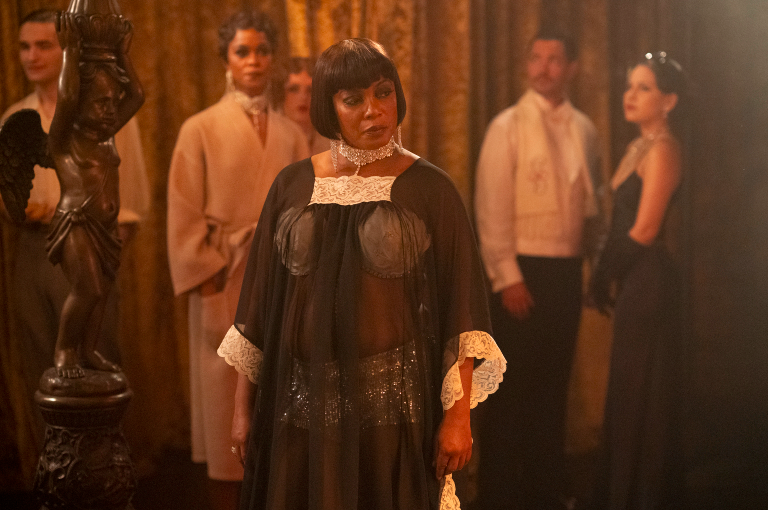 It’s been a rough couple of weeks for Black women. The fact that one out of three officers was charged with shooting drywall but not for shooting and killing Breonna Taylor remains infuriating, confounding, and headache-inducing. Perhaps this is one of the reasons why Sunday night’s Lovecraft Country titled “I Am” felt so gratifying.

A love letter to Black women, the show’s seventh episode featured Hippolyta (Aunjanue Ellis) seeking answers about George’s (Courtney B. Vance) murder and finding a few clues. But more importantly, Hippolyta answered the most pressing human question of all aka her Raison d’etre. The episode began with Hippolyta and Diana (Jada Harris) arriving at the Braithwhite castle and finding it completely destroyed. Diana doesn’t understand why they are there but Hippolyta spots of piece of George’s Negro Guide Book and knows he was at the castle, which also proves Tic (Jonathan Majors) and Montrose (Michael Kenneth Williams) lied to her.

Partially satisfied and inspired, Hippolyta goes home and starts toying with Hiram’s orrery to try and figure out how to get it running. After tinkering with the position of two orbs, the gadget comes to life and the sun opens up to reveal a key. And there is an inscription that reads “Every beginning is in time And every limit of extension in space.” There is also a series of numbers that turn out to be coordinates for an abandoned observatory in Mayfield, Kansas. Armed with said key, Hippolyta doesn’t know what she needs to do but she knows where she needs to go.

Elsewhere in the episode, after the title card drops, we see Montrose and Sammy (Jon Hudson Odom) at Montrose’s apartment. The vibe is warm enough because Sammy has made an impressive breakfast for his man Montrose as a way of saying thank you for letting him sleep over. At first Montrose is pleased by the meal and Sammy’s request that he put the needle on the record. But then when Sammy mentions that he ran into one of Montrose’s neighbors while shopping for their breakfast feast, Montrose’s whole vibe changes and the worry over what his neighbors might think of his closeted gay life turns Montrose into a nitpicky instigator who just can’t seem to be happy.

Sammy sees right through Montrose’ complaints and leaves. This causes Montrose to chase after him just in time for Tic and Leti (Jurnee Smollett) to walk up and see Montrose grabbing Sammy’s arm in what can only be a lover’s quarrel. An embarrassed Sammy leaves and Tic knows that the rumors are true. He calls his father a hateful gay slur and Montrose says he is still Tic’s father and deserves respect. Tic asks if his mother knew about Montrose’s sexuality and Montrose says yes. Tic storms off and before Leti can go after him, Montrose asks why they are there. In the courtyard, a fuming Tic tells Leti that now he knows his father’s self-loathing over being gay is the real reason he physically abused him as a child. Although Leti can’t seem to give him any words of comfort on the subject, she is able to tell him about a lead on his mother Dora’s (Erica Tazel) family that Montrose gave her. After learning that they had the same dream about Tic’s great grandmother Hanna (Joaquina Kalukango), Tic and Leti need and want answers. But Leti leaves out one important detail – she dreamt about being pregnant and probably is.

Leti isn’t the only one with secrets. The story returns to Ruby (Wunmi Mosaku) and Christina (Abbey Lee) after Ruby learned that Christina is really William (Jordan Patrick Smith). Christina takes Ruby down to the basement and shows her William and Dell’s (Jamie Neumann) bodies and explains that William taught her how to make the shapeshifting potion. She also tells Ruby that her father was a sexist pig who wouldn’t share his magical knowledge with her because she’s a woman. Proving that she’s the source of the inner swag that attracted Ruby to William in the first place, Christina somehow convinces Ruby to work with her and spy on Leti so that they can take over the world together. Sigh. I mean it’s not like Ruby has a ton of career prospects on the horizon, but Christina is shady af and it really seems like she would betray Ruby in a heartbeat. Time will tell.

Enough about all that. What really matters is that after all those narrative loose ends were tied up, we got to see Hippolyta cuss out Tic for trying to borrow her car for a road trip to St. Louis. Then she hires Ruby to watch Diana, hits the road, and heads to Mayfield. While driving, Hippolyta runs into Bessie Stringfield, the first Black woman to make a solo motorcycle trip across America. And that’s just in the daytime. By night, Hippolyta breaks into the observatory and uses the key and her exceptional math knowledge a la Hidden Figures to get Hiram’s time machines started. But before she can really dig into what the contraption can do, a couple of Lancaster’s (Mac Brandt) cop goons show up and start attacking Hippolyta.

Thankfully, Tic shows up and helps his aunt take down the cops. But how did Tic, who didn’t have a car, get to Kansas from St. Louis so quickly? Prior to this scene, Tic was having dinner with Osberta (Carol Sutton). But after he talked to Leti on the phone about Hippolyta having the orrery, did he sprout wings and fly to Kansas? Regardless, he shows up in the nick of time and helps Hippolyta who accidentally shoots and kills one of the cops.

The other cop gets sucked into a time-travel spiral and so do Hippolyta and Tic. Though we don’t know where Tic ends up, we do get to travel with Sistah Hippolyta who does everything from dance with and chat up the fabulous and famous expat Josephine Baker (Carra Patterson) to listen to Frida Kahlo (Camila Cano-Flavia). Josephine and Frida were rumored lovers after all. Hippolyta even gets to fight against the Confederate Army as a Dahomey warrior.

Hippolyta later reunites with an alternate universe George and talks to him about how she shrunk herself for him instead of becoming the woman she could’ve been. This is of course the second time Hippolyta unpacks her limited existence. She has a similar conversation with Josephine about the limitations of being an American Black woman in a Jim Crow country. It’s here that she utters the best line of the installment – “I feel like they just found a smart way to lynch me without me noticing the noose.”

There is even a fantastic scene where Hippolyta and George go off together to explore space while a monologue from Sun Ra’s 1974 Afro-futurist film Space Is the Place plays. Later, when the Garnet lookalike named Serephina AKA Beyond C’est (Karen LeBlanc) asks Hippolyta who she is one last time, Hippolyta says she is a Discoverer just like Orithyia Blue in Diana’s comic books. While Hippolyta has literally lived her best life and met Beyond C’est not Beyonce (get it?) she concedes to Seraphina that she will have to return to Earth to be the mother to Diana she was meant to be. And if the previews for next week’s episode are any indication, Diana is going to need all the help she can get.