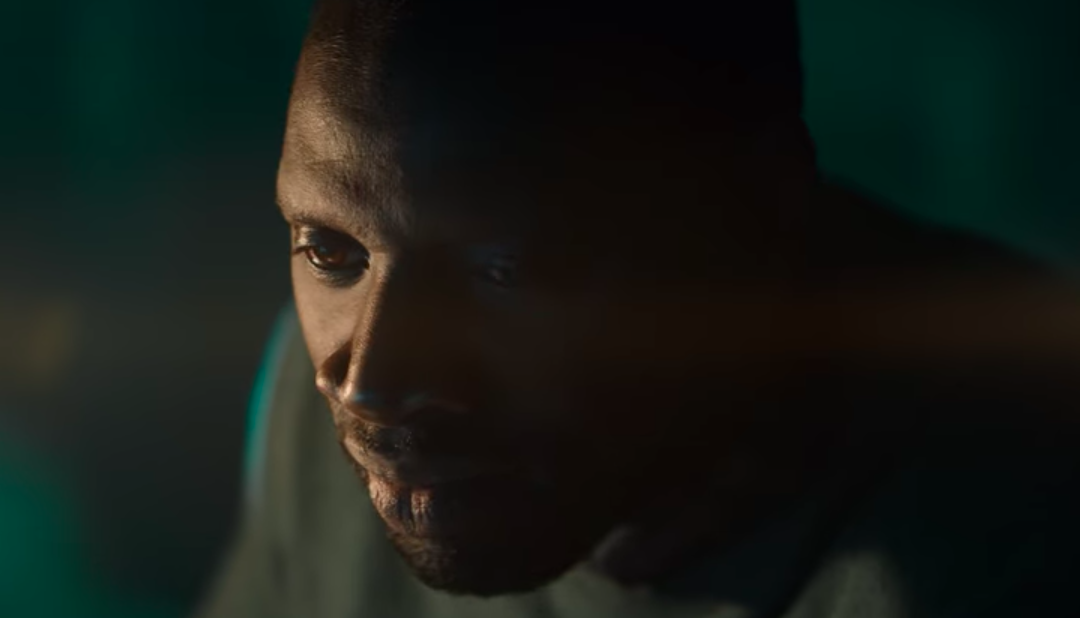 Commissioner Dumont (blech) wakes up in a lovely home with a wife and kids. How lovely it is to have such a life. Assane hacks into Dumont’s security system and watches. During a meeting, Assane interrupts Dumont in a meeting with the mayor, posing as an IT guy who has found porno on the commissioner’s computer. Assane makes a scene to get Dumont alone, knocks him out, takes his SIM card out of his phone, as well as takes Dumont away in a box. Dumont wakes up, handcuffed to a chair and alone. Assane, disguising his voice, questions Dumont on remembering Babakar.

Back in 1995, Dumont meets Mr. Pellegrini to discuss the investigation. Mr. Pellegrini has the nerve to call Babakar an ape. I want to fight the man. Dumont points out that there’s no connection between Babakar and the necklace, Babakar has no criminal background, he doesn’t fit the profile, and Mr. Pellegrini had the necklace insurance raised days before it was stolen. Dumont hints at Mr. Pellegrini being a suspect. Assan’s interrogation continues but Dumont doesn’t change his stance in regards to Babakar being the suspect. Assane brings up Dumont’s salary, his connections to ring leaders and how he gets paid, leveraging this information for information on Babakar or he would tell Dumont’s wife. Dumont states Babakar did what he did for his kid. The police department is on alert to find Dumont.

Claire calls Assane about Raoul’s birthday but it is clear that he has forgotten. She doesn’t believe his excuse but knows that she doesn’t want to know what is going on but offers an ear for him. When they were younger, Assane meets Claire in class after he notices that she was being harassed by guys in class. She knows a bit about his father and is nice to him. The police are doing their best to find Dumont through GPS tracking, even without the SIM and battery within the phone. Assane shows Dumont ways that he can use Dumont’s face and voice to implicate him in the crime, unless he tells him the truth. Things get heated, and Assane reveals that he is Babakar’s son. Dumont is shocked while Youssef is able to pinpoint Dumont.

Dumont pleads to Assane, apologizing for the way he spoke to him when he was a child. He continues to plead for his life and his family. Claire and Assane chill together at school, which a few guys notice and of course confront them on. Assane ends up fighting the guys, then later Claire helps him to clean up the cut. It’s the first time he makes a move on Claire, but she states they are friends. Assane tells Dumont that he forgives him but people don’t change. The police find the van, the driver, but no Dumont. The driver informs the police that he dropped off the suspect at city hall and Youssef believes him, stating that is what Lupin does. Assane walks out just as the police are pulling up to the building. They find the commissioner.

Claire finally gives Assane a kiss but doesn’t want to rush things. They will always be there for each other. Lt. Sofia Belkacem (Shirine Boutella) doesn’t believe Dumont’s recant on his kidnapping and informs her boss. Youssef finally informs his boss about who he thinks stole the necklace and the connection to Dumont’s kidnapping.

Dumont arrives home, exhausted, but searches his home for cameras, tossing each one out. As he showers, Dumont thinks of when he spoke to Mr. Pellegrini on how Babakar is innocent, prints were planted, and he wasn’t near the house during the robbery. Mr. Pellegrini quietly threatens Dumont’s wife while also explaining to him how this will boost his career if he convinces Anne to tell Babakar to sign. The guilt seems to get to Dumont when he makes a call to Mr. Pellegrini to talk about Babakar and Assane’s involvement. His wife arrives shortly after, relieved that he is safe. Dumont instructs Circe (similar to Alexa) to play their song. Unfortunately for Dumont, Circe plays Dumont’s voice talking to Mr. Pellegrini. Dumont verbally tells Circe to stop then bangs the equipment, but it continues repeating his voice as his wife watches, astonished.

I was right about Mr. Pellegrini being involved with Babakar’s arrest. How did Dumont think that he would get out untouched by Assane? At this point, Youssef should be working with Assane. The two would make a great team. Now it is time for Mr. Pellegrini.