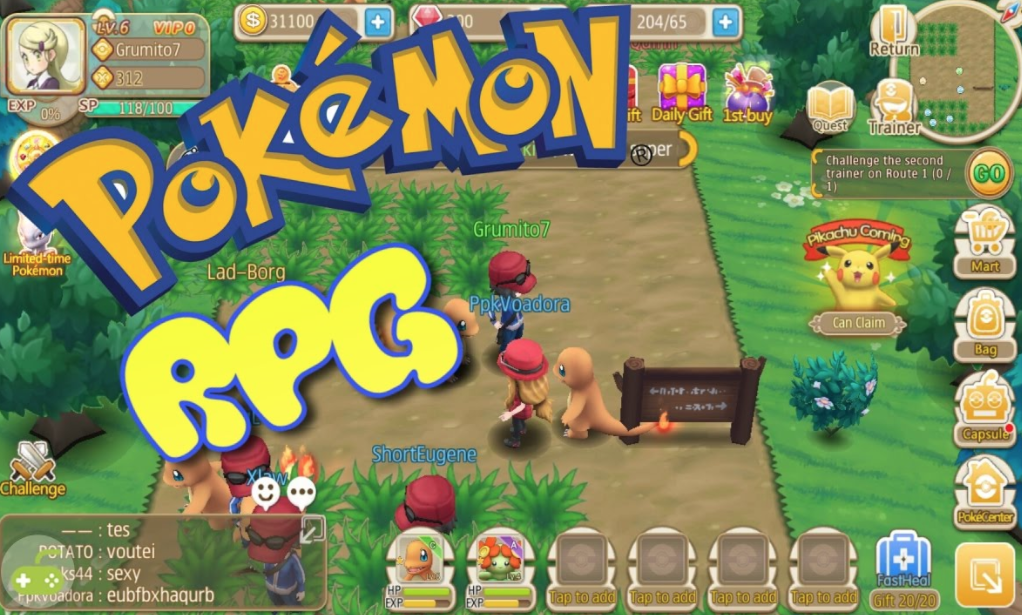 What determines a good RPG vs. a bad one? There are universal traits for all genres which make for a competent and enjoyable game, but what things, in particular, have to be addressed in order for the game to be as enjoyable as it can be in the RPG genre.

Statistics are one of the biggest components of RPGs. These numbers determine the value of a character’s or enemy’s health, strength, magic, etc. Statistics determine a player’s effectiveness in combat and can show a semblance of growth. In RPGs, characters start at a low level with base stats, but by the game’s end, characters will be at a significantly higher number. Systems used for increasing stats are experience points, equipment, abilities, and consumable items. These systems are what prevent other games with stats, like Call of Duty or Grand Theft Auto, from being labeled as RPGs. Stat manipulation is at the core of the game and determines how much time is spent on battles.

Experience points (exp) are the most basic way of stat growth. Enemies are defeated until enough exp is gained to level up which is where the actual stat increases are applied. In most games, the higher the character’s level is, the more experience is required to level up. This means the player will have to defeat more enemies to get a level increase or new enemies will appear and offer more exp. It’s important in an RPG the distribution of exp is balanced. If enough exp isn’t given, the player will have to grind more in order to gain levels but if too much exp is given, the player can quickly become over-leveled and the game will no longer be a challenge.

There are other ways in which the player can become over-powered. For example, the player comes across a powerful weapon, then all enemies fall to the player’s attacks with ease. Equipment is my favorite way of manipulating stats and seeing my character’s growth. Gaining a new weapon with a cool name and an attack increase can make the player feel powerful and immersed in the world.

Equipment in games is applied through shops or as treasure throughout the game world. An important way of making equipment fun and fair, like exp, is having money available at the right frequency. When purchasing or finding equipment, the equipment should have a purpose. It can increase a character’s attack, power, or defense. But if the equipment lowers a character’s stat, there should be compensation, like a bigger increase in another area,  the offer of a special ability, reduced elemental damage, or an increase in the amount of money obtained from enemies.

Equipment that significantly increases a character’s stat is not inherently bad. All equipment in games is optional and it’s okay if the player feels super powerful for the time being. But there should be a point where the piece of equipment becomes outclassed later and if there aren’t many other items that do the same thing. On the opposite end, equipment that barely increases a character’s stats offers the player little reason to buy or use the equipment especially with no ability attached to it, which brings up another point.

In a lot of RPGs, there seems to be a problem of useless equipment. An RPG can offer proper distribution of weapons throughout the game, but once better equipment is acquired, the player is left with old equipment with no useful purpose. As a solution, most games offer the ability to sell old equipment at shops. In most cases, shops don’t offer much money for used weapons, armor, or accessories so the player ends up hoarding items he or she will never use.

Increasing selling prices is one solution, but a better solution can be found in crafting. Some RPGs provide the option of using two or more items to build a new one that’s better than the two items alone. This is a good way to get rid of equipment outclassed by the player’s current set.

Final Fantasy VIII goes a bit further by replacing the player’s current weapon with an upgraded weapon, but it’s unfortunate VIII has a non-balanced method of their equipment. Some characters, like Zell, receive upgrades later than other characters and the majority of the weapon upgrades barely feel stronger than the last weapon.

In-battle abilities also offer ways to increase a character’s stats. Moves like Agility in Pokémon offer an increase in Speed to a character, but the stat increase is lost after the battle, when the Pokémon is switched out, or when an opposing Pokémon nullifies the boost with Cotton Spore, for example. These types or abilities can offer a needed boost in the midst of combat if the player hasn’t leveled properly by running away from battles or if the player missed equipment. There are also abilities that can temporarily decrease stats. These are most commonly represented in status ailments.

Status ailments are a good way of manipulating a player’s and an opponent’s stats while offering a challenge and providing options to overcome those challenges. Status ailments tend to decrease stats like health points or defense, but a good amount adds in conditions outside of statistics such as making a character unable to perform any actions, randomly attacking characters, or removing access to special abilities. Handling of status ailments can make a game enjoyable, frustrating, or another forgettable component that occasionally rears its head.  If enemies constantly inflict status ailments and the player doesn’t have options to prevent these statuses, it can become an annoyance, regardless if antidotes are super cheap. If used belligerently, status ailments with big handicaps can feel unfair to the player. For instance, the player fights an enemy who casts an instant death spell on multiple characters in the player’s party with no warning or way to protect those characters.

Items are another way of increasing stats. Items are used to cause a temporary boost during combat-like abilities and spells or are used to offer a permanent stat increase to a character, like seeds in the Dragon Quest series. Even if a game offers plenty of items, the player can still hoard, but choose never to use items. Developers could provide incentive to players to use items.  Limited inventories or offering achievements can provide such incentive for the player. For example, in Earthbound, I was aware of each item I was using and selling.

There is one instance where developers can go overboard with stat manipulation. Over the years, Pokémon has added more ways to increase and manipulate a Pokémon’s stats. The player has exp and leveling along with items and moves, but the player can also have natures and Effort Values (EVs) as well. Natures are a predetermined, random stat growth of a Pokémon, a permanent stat given when it’s born. Depending on its nature, Pokémon can become only so strong in a particular stat. EVs are hidden stats obtained whenever a Pokémon battles and the points gained are determined by the type of Pokémon battled.

If casually playing Pokémon, natures and EVs won’t be of much importance, but if playing Pokémon on a competitive level, these will need to be taken into account. Natures and EVs can make building a competitive Pokémon frustrating and tedious. It requires trying to catch or breed a Pokémon with another specific Pokémon, then making that Pokémon battle only certain types of Pokémon. Items can be used to speed up the process, but it will still require some time.

Outside of stats, a major component of RPGs is story. Like with any video game, story is not essential for development, but RPGs are among the top two genres where story is at the forefront with adventure games being the other genre. In any medium, an enjoyable story comes from clear, coherent writing that has a sense of direction and exudes emotion. A story in an RPG should offer characters with distinct personalities the player can connect with or a plot with stakes.

A good story can keep the player playing a game even if gameplay is average. Pacing is important for keeping the player engaged in a story as well. I hate to keep mentioning Final Fantasy, but it’s the series I’ve played the most and in the twelfth entry, there are less frequent cutscenes around the halfway point of the game. At first, I was eager to be engaged in the story, but later in the journey, I forgot why I was in this fortress slaughtering enemies. However, story isn’t everything.

Exploration is the third component in RPGs. Along with story, exploration offers a break from the main component, which is combat. Exploration is the player finding his or her way to the next destination and discovering treasure, a town, or something else entirely. It’s a time for the player to relax and take in the game’s world. Cities and towns act as hubs for the player, to heal wounded characters, buy items, engage in a mini game, talk to NPCs, and advance the story. Exploration is a nice way to learn more about the game’s world and make it feel alive. It also feels rewarding discovering treasure going down  an unbeaten path or finding a hidden room. Exploration is as fulfilling as the player makes it whether it’s the treasure rewarded, the types of activities, or interesting NPCs. Shallow dialogue or mundane items can bore players. In dungeons or world maps, exploration can be tedious if the player is getting into frequent battles, which is usually only an issue when random encounters are used in RPGs.

Another aspect I want to cover is battle systems. This is highly subjective like the entire medium.  I don’t believe combat is needed in an RPG, but most RPGs end up centering around combat so a system that keeps the player engaged in his or her actions can make for a decent battle system at the very least. Some players are satisfied with the simple menu-based, turn-based system of the Dragon Quest games. Some players like systems a little more involved like Legaia’s motion-based inputs or players who prefer action-based combat like in Dark Souls or Nier Automata. Considering the most basic of systems can keep a player engaged, it is hard to analyze what makes for a good combat system.

Ability progression is a sub-component of the combat system and is easier to critique in their design. Like exp and equipment, abilities need to be distributed evenly and feel important in use. The way abilities are obtained is also important. There shouldn’t be tedium involved to obtain them or any confusing methods. Some games go for obtaining them by purchase, leveling up, or gaining ability points. A more complicated system may involve some or none of these methods.

All of these components contribute to the quality of an RPG. The player can have an RPG which excels at combat and exploration but fails at the story and still be considered a good game. On the other hand, the player can have a game with a great story and exploration, but has an underwhelming gameplay but is still be considered a good game. It all determines on what matters most to you, the player.