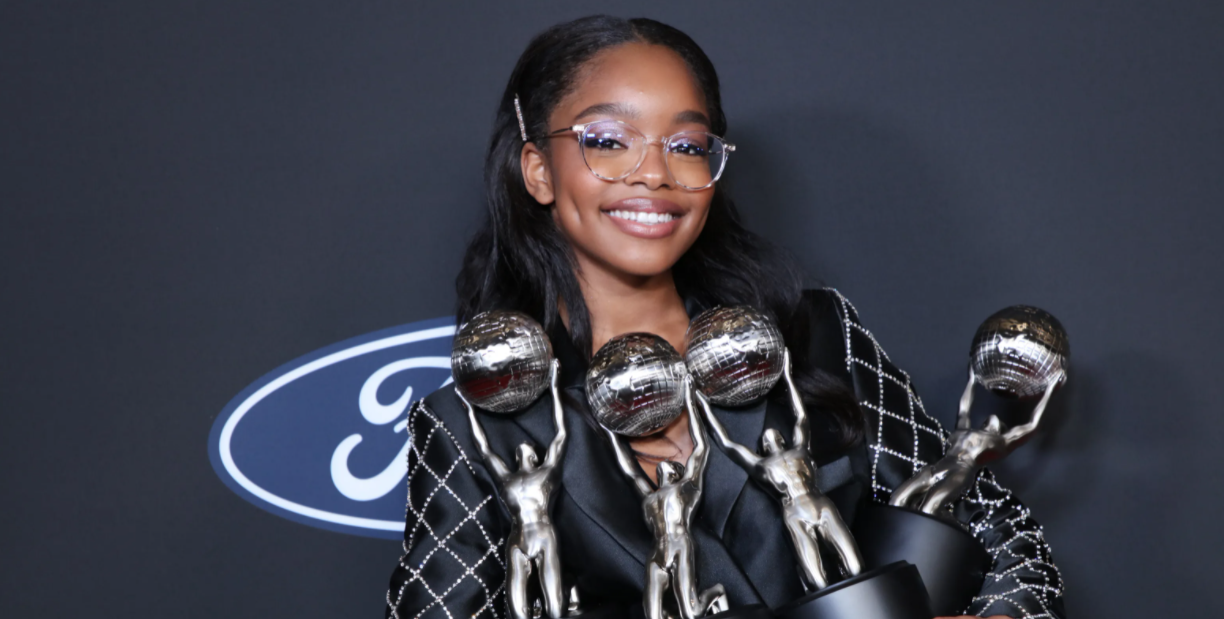 Marsai Martin has grown up right before viewers’ eyes on the hit ABC show Black-ish. But did you know she’s also the voice behind Aggro, the feisty Fire Fury in Dragons Rescue Riders: Heroes of the Sky? The 17-year-old Hollywood mogul is working hard to make all of her dreams become a reality, as the youngest African American executive producer in the industry. Now that Black-ish has wrapped its final season, Martin isn’t just waiting around for what’s next; she’s creating and being part of the projects she wants to see.

Black Girl Nerds caught up with Martin via Zoom to chat about Rescue Riders and her upcoming work.

You voice Aggro, a witty dragon on Dragons Rescue Riders: Heroes of the Sky on Peacock. How much of your personality do you bring to the character?

She brings personality to me, to be honest! I love Aggro mostly because she’s funny; she’s a hothead as well, literally. Even though she is small and petite, she has such a strong energy to herself, and that is something that I can relate to. I’m 5’1”, but my energy and power are taller than me. [Laughs.] I’ve been working on Rescue Riders for quite a while with an amazing cast and phenomenal writers. It’s awesome.

Do you have any rituals or routines to get you into the mood for voice work?

When it comes to animation, not really. I try to drink tea before I go into any session because my voice will be gone by the time I’m done. So I usually like to be as comfortable as possible because it’s a lot of sitting and staring at the script, talking through a mic. There really isn’t a routine to it.

Did any of the cartoon characters you watched growing up inspire you in creating this character?

Surprisingly, no! I saw the little outlines that [the creators] have for each character, the different vibes, and I related [these to] the other characters that I played before Aggro. So I was like, “This makes sense,” you know? I also love feeling like I’m creating a character’s personality. So I don’t really like research when it comes to that but playing around, having creativity, and having fun throughout the process.

A lot of fans know you from your character Diane on Black-ish. How has the transition been as you’ve all wrapped up the final season recently?

We finished filming last month, and ever since then we’ve just been on the go, constantly doing different events and meetings and stuff. So I don’t think it really has sunk in yet. Probably [it will] this holiday break, when I have absolutely nothing to do. That’s why it’s bittersweet. It’s hard to be sad because I’ve made such lifelong friends and a second family. I’m looking forward to seeing where everyone goes for their own next chapters.

You’re the youngest African American producer in the industry. Now that you’ve wrapped on Black-ish, what are some dream projects you’d like to pursue with your production company?

I want to do everything. I love different types of things. When it comes to home decor, I want to work in that area. I have a Discovery+ show coming soon about creating rooms and all of that. So it’s more of the things that I love that are different hobbies that I’m really into. I always tell myself to try everything, go for it, and see where it goes from there. It doesn’t hurt to try things once. Then if you love it, you keep going. So that’s definitely the motto for this year and the years to come when it comes to me and my production company.

Are there any stars you’d love to collaborate with on projects?

I have so many, but I would love to work with Beyonce. I love Beyonce! I also want to work with Rihanna. I feel like when it comes to the music industry and the film industry, they go hand-in-hand. I would love to have one of them score projects or even be a part of it if they want to try acting.

Along with Rescue Riders you’ve done so many projects this year. What does downtime and rest look like for you in this last month of the year?

I love sleep, so I’ve been [she sings:] sleeping! I’ve been sleeping whenever I can. That is one thing that is always a big deal to me. Also hanging out, being with people who make me feel good and are my support system — my family and my friends — is one of the most amazing things. So whenever I want to hang out or whenever they want to hang out, we’re there. It feels like some normalcy. Long story short, I think being around people who I love and surrounding myself with positive energy that’s not all about work all the time is very important.

Being a young Black woman in Hollywood can come with its challenges. Do you have any mentors in the field that give you good advice and tips?

To be honest, it’s not really people who are in the industry. It’s usually my parents or people that I work with in my production company. We figure out and control the path that we all want to take. I wouldn’t have it any other way. I am so grateful to even have contacts that I can reach out to, whether it comes from Anthony or Tracee or Laurence or Jenifer [who play the characters Andre Johnson, Rainbow Johnson, Pops, and Ruby Johnson on Black-ish] or anybody like that. I’m so grateful to have those. When it comes to making a decision, when it comes to movies or projects, or where I want to go when it comes to growing up, I go to my parents for sure. They’re not strict parents who are like, “You can’t do that.” So I’m very grateful for that.

You can watch Season 2 of Dragons Rescue Riders: Heroes of the Sky on Peacock now. The farewell season of Black-ish premieres January 4, 2022, on ABC.