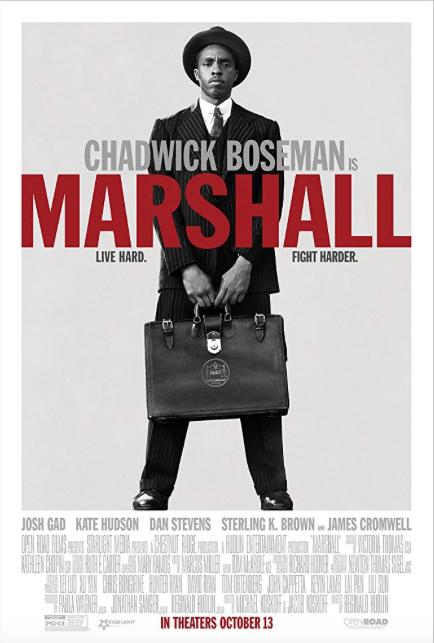 In the long list of people of color who should have their story filmed and screened, Thurgood Marshall is very near the top of the list. A Black judge, with a Moses-like-quality of changing lives–by standing in front of those with power, and then patiently outsmarting them. It’s a story everyone can cheer for. It was a strange choice to focus on one specific moment in this giant of a man’s life. A moment where he was not allowed to speak.

Directed by Reginald Hudlin (House Party, Boomerang), the film follows Thurgood Marshall as he works to free a Black man accused of raping a white woman. It’s everything you would expect. As in most cases of sexual assault, it’s a case of her word against his. She is an upstanding wealthy citizen and he is her penniless driver. The only exception that makes this story extraordinary, is the fact that a prejudiced judge allows Marshall to try the case, but only as a consultant. Most importantly, Marshall is not allowed to speak in court. 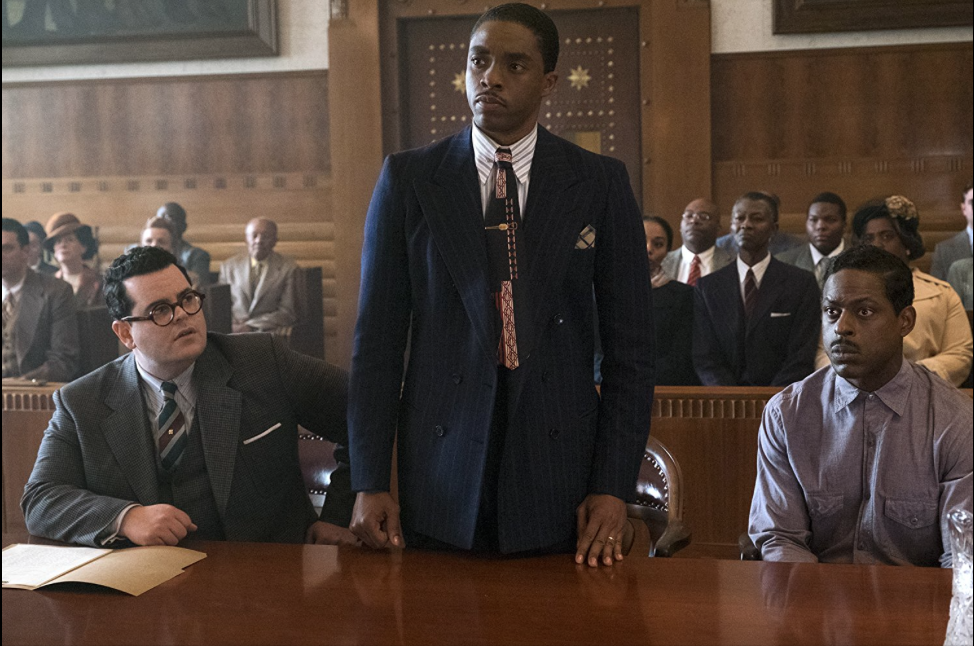 As always, Chadwick Boseman is spectacular. His regal presence sells every quiet moment. He wears Marshall like a thoughtful revolutionary. Through his court-mandated silence, the audience watched Marshall as he observes families coming and going. This super power is used when he first meets the accused.

He had not ruled out that the man could have raped the woman. Marshall is not interested in taking on lost causes. The NAACP has sent Marshall all over the United States to serve as a guardian angel of sorts. He’s a smooth talker and well liked by most. His access in certain rooms is a huge part of what make Thurgood Marshall successful.
Which is why despite Boseman’s incredible performance, this film suffers historical inaccuracy because of colorism. Marshall was a light-skinned Black man. While he actively chose not to pass, to deny the privilege that Marshall‘s complexion occasionally afforded him is disingenuous at best, inaccurate at worst, to ignore the plight of many of the victims he helped protect. 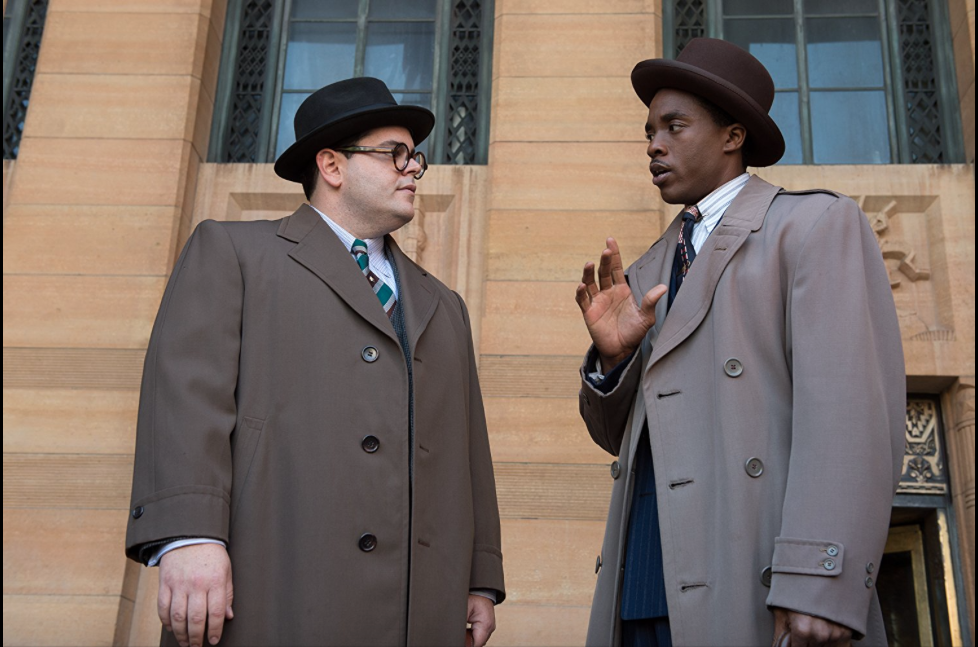 Even more upsetting is the fact that the story seems to revolve just as much around Marshall’s life as it does around Sam Friedman’s life. Freidman, played by Josh Gad, is a Jewish real estate attorney that Marshall asks to take on his client’s case. The plan was for Friedman to step aside after he petitioned the court to let an out of state lawyer try the case. The judge did not agree. Friedman had to stay and work the case or else watch a potentially innocent man go through an unfair trial.

As fascinating as Mr. Freidman’s story is it was disappointing to experience arguably the most influential Black man in American political history, shared from a white man’s narrative as well. Gad, for his part, was warm and affecting. His desire to live peacefully is consistently at odds with his desire to live in a better world. I imagine this is a performance award committees will flock to. 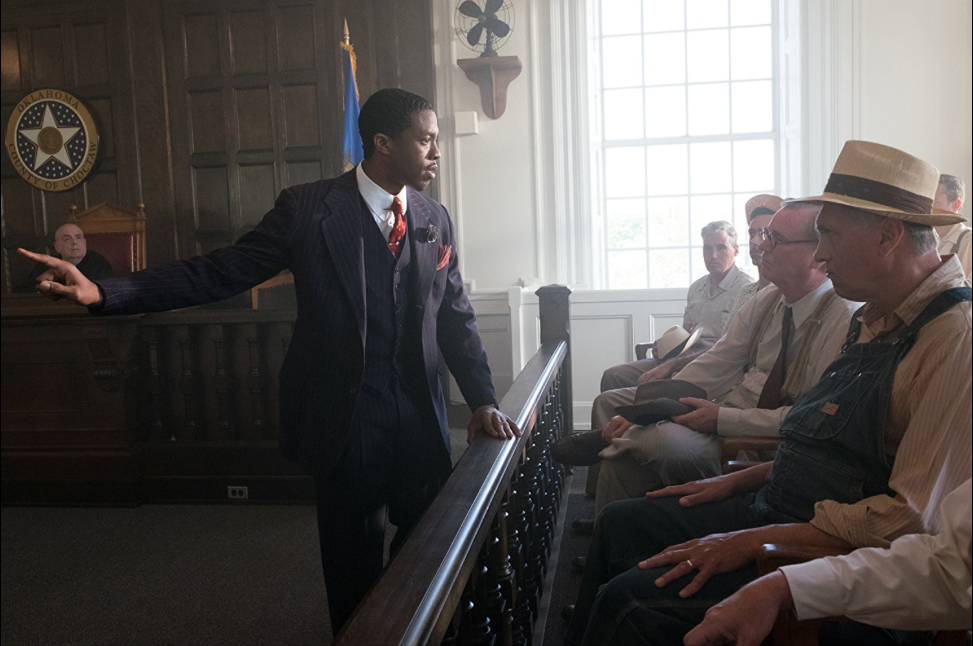 For all the stories of Black men, Black women are left very much on the sidelines. Marshall was married to his wife Buster for twenty-six years. While Marshall was arguing Brown v. Board of Education she learned she had lung cancer. She did not tell her husband until after the case had been ruled on.

In the film Marshall, she is reduced to a wife trying to get pregnant. While fertility issues make for great drama it’s demeaning to Buster, who never had any children, but lived an incredible life. Why is she just the woman who wants children and not also the rock who helped uplift her husband?

Marshall is a well cast, expertly shot moving film about the struggle for justice Black Americans who deserve the opportunity to get a fair trial. But it’s not a biopic about Marshall. The scope is too wide and too narrow at the same time, completely missing the mark.