In the first few minutes of Mindenki (Sing), a schoolmaster tells a young girl that anyone is welcome to join the choir. This invitation is warmly expressed, absent of any mention of ability, talent, or competition.

By the end of the film, I found myself reflecting on many significant questions about the overlapping considerations between children and adults. For one, in what ways do young people internalize the expectations of their adults and guardians? How do they combine these expectations with their own growing comprehension of their talents, bodies, or diverse gifts? Or those of the other children around them, for that matter?

While these questions were prominent in Hungarian filmmaker Kristof Deák’s short, the story is also generally positive and upbeat, highlighting the inborn tendency of young people to welcome, draw out, and reflect the joy of their recognized peers. This is why, after popular little girl Liza (Dorka Hais) notices her new friend is not actually singing out loud in choir, but rather miming the words and pretending to sing, she realizes something is wrong.

Through her continuous needling, she learns her friend, Zsofi (Dorka Gasparfalvi), has been instructed by the choir teacher to avoid singing out loud, as her voice was deemed incapable of a strong performance and — more specifically — ineffective to the group’s standing in an upcoming competition. 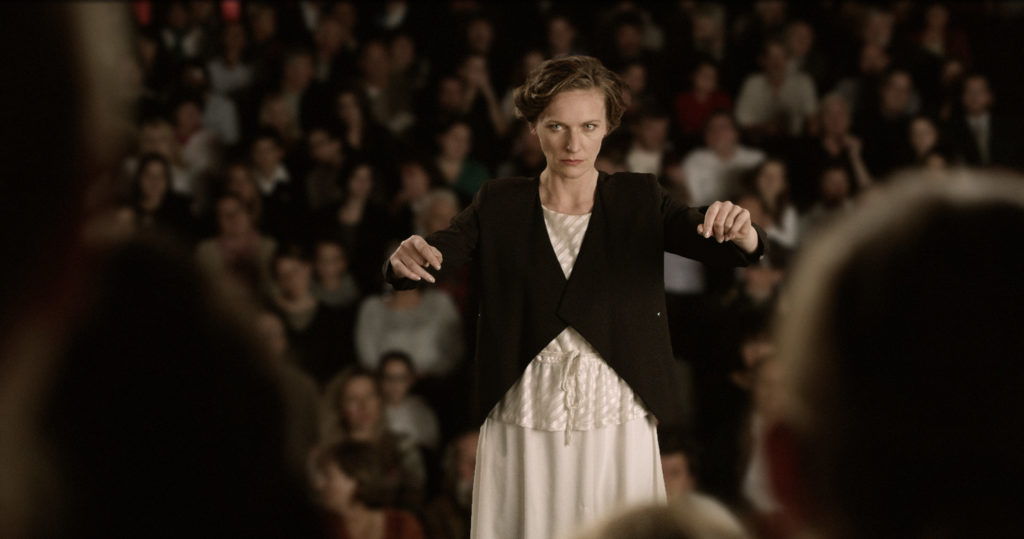 Zsofi is not alone in her silence, as other choir members have been similarly instructed to fake their singing for the benefit of the group, which is an interesting routine to compare with the schoolmaster’s original invitation. As is common (and more so in adult life, I might argue), the outward-facing acceptance often contradicts the reality in the room.

There is also a less-obvious message being shared here about a child’s sense of awareness of the world, in that Liza doesn’t realize the plight of the other miming choir members until Zsofi’s confession, almost as if she had to learn the idea that young people can be sorted in unequal relation to each other. Having learned this truth, Liza finds she cannot “ignore the silenced” anymore.

I don’t believe Sing resolves this awareness cleanly, which is to its credit. The denouement, which unifies the choir against teacher Miss Erika (Zsófia Szamosi), expresses elements of rebellious solidarity but is also a kind of failure. Liza doesn’t share a detailed response to how individual ability affects opportunity, beyond the idea that, well, why not allow anybody who wants to sing the right to do so, because who cares? Maybe that statement is unintentional, and further muddied when the last shot of the film features the choir joining in their own selected song, sans teacher, in a performance that seems to make better use of their different voices.

Like many of the best short films, I believe this ending is purposefully contemplative, but can also be interpreted simply as the compassionate wisdom of a child in the face of an adult’s weary pragmatism. I also wonder if the chocolates dutifully offered at the end of each choir session represent a symbolic stand-in for the modern trend of “participation trophies.”

Sing looks beautiful and its cast is uniformly excellent, with great attention made to nuanced blocking; the camera rests on a boy just long enough to observe him wolfing down a chunk of chocolate with practiced flair, and Liza’s cocked, concerned eyebrows create a recognizable crease that becomes a vibrant part of her character.

And maybe this is just my age showing, but I even feel a small amount of sympathy for Miss Erika, at least until she singles out the “non-singers” in a venomous, humiliating response to Liza’s challenge of her authority. The teacher wants to succeed and seems to genuinely want the students to share in that success and its rewards, regardless of their actual involvement. Perhaps, in the end, this is a matter of young people not yet comprehending, or pointedly not caring, what winning is worth.

If it isn’t apparent by now, there are a number of ways to interpret the lessons of Sing, which work to strengthen the finished piece. Unique, strangely sweet (watching Zsofi and Liza sing and strut to a classical music recording the way modern young people might selfie-dance together to any of our era’s top-100 hits was unexpectedly striking to me), and filmed ponderously close to its young performers, the short has managed to resonate in my memory long after watching it.

I have high hopes for Sing to gain even wider exposure, so keep an eye out for its appearance on the final Academy Award shortlist later this month.