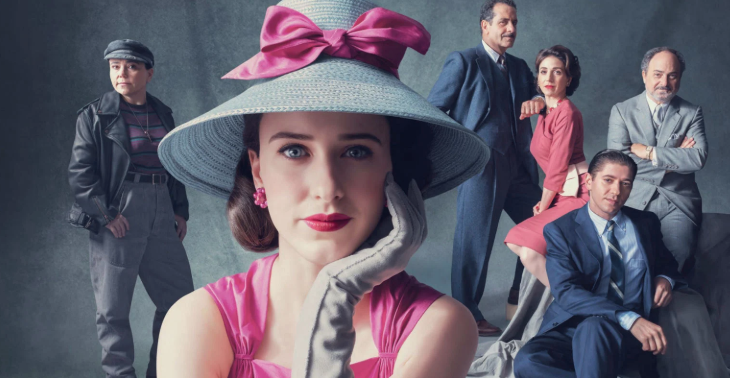 It is fair to say that Amy Sherman-Palladino’s most notable works, Gilmore Girls and The Marvellous Mrs. Maisel, are pretty white.

While there are characters of color in both shows (most memorably Gilmore Girls’ Michel and Lane Kim), her main protagonists are Caucasian women, moving through and inhabiting spaces that are largely populated by white people. However, in the recently released third season of Mrs. Maisel — a comedy-drama about a divorced housewife pursuing a stand-up comedy career in 1950–’60s New York — there are signs that the show is finally stepping out of its comfort zone.

In addition to Midge Maisel (Rachel Brosnahan) touring with African-American entertainer Shy Baldwin (an amalgamation of iconic singers from the ’60s like Harry Belafonte and Johnny Mathis), her ex-husband Joel, a character much maligned by many viewers, is trying to open a nightclub in Chinatown, a storyline that has the potential to, in the words of Sherman-Palladino herself, “stretch out [the show] a little bit.” For the first time the audience is being taken into a world where Maisel doesn’t usually operate — a world where the white character becomes the “othered” one. As Joel tries to get his new night club up and running, he has to navigate his way around Chinese-speaking local residents, an illegal gambling den in the basement of his newly acquired space, and ordering Chinese food at his local restaurant. More importantly, he has a new budding romance with Mei Lin (the scene-stealing Stephanie Hsu), a whip-smart, alluring Chinese-American woman who’s stepped in to help him with his business.

Hsu, a Broadway star and Brosnahan’s fellow NYU alumni, fits into Sherman-Palladino’s world like a glove, handling the writer’s signature fast-paced, razor-sharp dialogue like a seasoned marathon runner. As a fluent Mandarin speaker, she’s also able to deliver Mei’s Mandarin lines with precision, albeit with some help from her Taiwanese mother. Hsu describes her character as the “guard dog goddess of Chinatown,” giving the show praise for writing such a “modern” female character.

“With Mei, to be a female in Chinatown and a medical student [in the 1960s] is one of the most badass things that a woman could possibly do,” Hsu said in an interview with the New York Post. “It’s not a stereotype at all, it’s completely pushing the boundary of what was possible [at the time].” For a show that is centered around an Upper West Side Jewish family, Hsu calls the inclusion of her character “extra special,” and that Mei is “beyond any character I’ve ever seen on TV that is Chinese-American.”

Hsu, who took a course called “Chinatown and the American Imagination” in college and has spoken candidly about her own struggles with her Asian-American identity, worked closely with the people behind the scenes to make Mei feel “contemporary and new” while still having her be grounded in her cultural heritage. Although her hairstyles are inspired by Audrey Hepburn’s, Mei’s traditional Chinese dresses are made by a costume designer from China who, according to Hsu, could “hear his grandmother while he’s building the dress.” Mei, in line with other classic Sherman-Palladino female characters (the likes of Lorelai Gilmore and Midge Maisel), is extremely self-assured and independent. In her relationship with Joel (a man Hsu views as someone who’s “trying his best, but has so many ideas told to him about how to be a man”), she is unafraid to confront him on his shortcomings. When his ego is bruised after he finds out that she’s helped him attain a liquor license for his club, she does not back down, reminding him that he cannot do this alone and calls him out on his pride. Joel and Midge are still engaging in a classic “will they, won’t they” dance, but the show has always functioned better when they’re both romantically involved with other people. Mei, very much like Midge’s ex-fiancé Benjamin (the brilliant Zachary Levi), deserves to be more than just a pit stop to a Midge-Joel endgame.

Sherman-Palladino calls her heroine a woman who is “straddling the past but pushing to the future,” which is why Maisel is set in the ’50s/’60s, a “time period of change.” For Midge and her friends and family, the Vietnam war and the Civil Rights movement are on the horizon; Chinatown, too, will be going through its own upheavals. At the time of Joel and Mei’s courtship, Chinatown is still very much its “own island”: in the ’50s and early ’60s, there was very little government presence and English was not a dominant language among the residents, many of whom were male. As the ’60s progressed, however, the population would swell to ten times its initial size because of the Immigration and Nationality Act, which allowed for more immigrants from other Asian countries to move to America. Therefore, if the show were to continue exploring this “interesting and colorful and mysterious” world, there should be more scope for potentially groundbreaking storylines in the future.

Throughout its three-season run Maisel has been criticized by some critics as too “cloying” or not having “enough substance.” This third season, however, is anything but cloying: Susie’s mismanagement of Midge’s money, Midge’s relationship with Shy Baldwin and his crew, and her horrendous blunder in the finale prove as much. As Midge is left bereft in Susie’s arms as Shy and his entourage fly away, there is a very strong hint that the show might finally be “ready to reckon more openly with Midge’s blind spots.” It would be a shame, however, if Mei Lin and, by extension, the world of Chinatown is left by the wayside as a result.