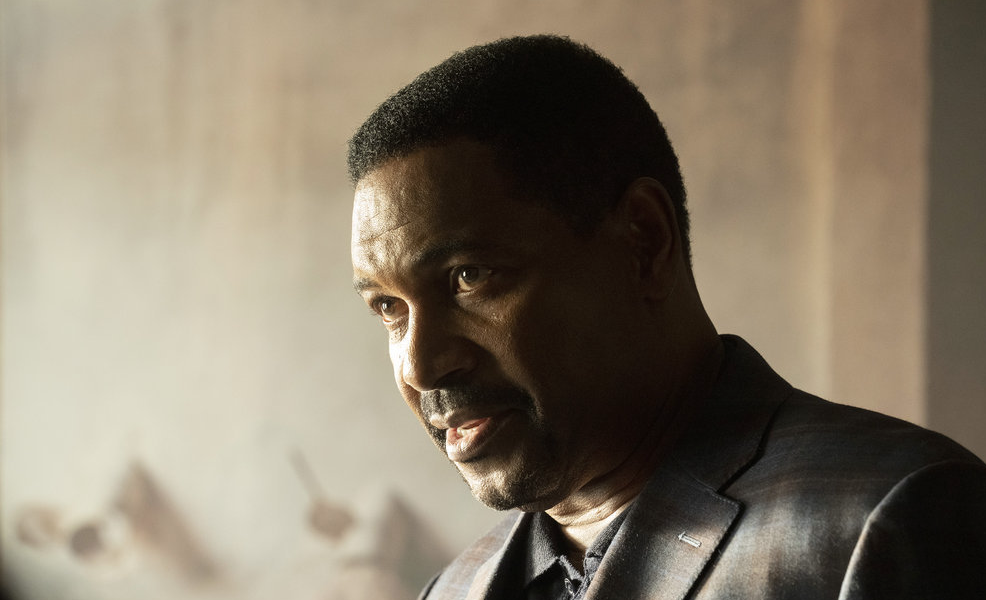 Does it feel good to be working with Dick Wolf again?

It does. I love the Dick Wolf world. One of my dear friends, Terry Miller, is over here producing. He came from Chicago P.D., then he came here to help get this show launched. I’m working with Chris Meloni [Detective Elliott Stabler] and Danielle Truitt [Sargent Ayana Bell], and I’m here I’m surrounded by giants and having a ball. I’m having a fantastic time being creative with other people who challenge each other, just to see who can elevate the show to the highest level while embracing it all and having fun. I wouldn’t have it any other way.

Preston Webb is a nuanced character who the audience is torn to root for.  What’s your favorite aspect of playing this role?

Preston’s relationships with powerful people like Congressman Kilbride [Ron Cephas Jones, This is Us] put him in a room of powerful opportunities. I get to live out Preston’s truth. No one is all good. No one is all bad. Good people sometimes do bad things, and bad people sometimes do good things. I want the audience to walk that fine line and ride on this journey with us. They can see themselves conflicted because they see characters who are genuinely and sincerely conflicted as good people who have made some really difficult decisions to temporarily delve into the world of organized crime until they can get out of it and build the next Walmart or Amazon. Preston is a man who’s unafraid and willing to do anything, and he will make the transition and would do well running a boardroom or running a corporation because he knows how to do it.

But Preston’s past is messy. It’s possible that even if he makes it to that point of running his businesses legally, his past is the kind of past that never completely goes away. If he does legitimize all of his and his wife Cassandra’s efforts, their past may find them. Chickens always come home to roost. That’s an interesting dynamic that also makes him fun to play. But I would like to see the web of the character, for the sake of the audience, navigate and get to that place where he can make that transition and cross over. And then let’s see what happens. So we’re having a conversation about that today, on the heels of this interview.  I’m looking forward to figuring out how that’s going to happen.

I love working here. It’s the most famous city in the world. Everything is here, people from all walks of life, from all lifestyles. All cultures, all flavors keep it interesting. It’s exhilarating.

You’re such a skilled actor. Do you face any challenges playing this role at this point in your career or is it easy for you to embody?

There’s constant navigation. I understand that the origin of the word “entertain” is to enter and hold captive. If you contain something, you hold it captive. For me as a responsible artist, I’m thinking, what do you program people with once you’ve held them captive? What is your responsibility to audiences? And for me, it’s not just a bad guy, a Black guy who’s going around shooting other Black guys and killing other Black people. It’s like, no, there are other layers to consider. So we’re navigating things that could potentially have social fallout all the time because ultimately all of us want to live in a better world. We don’t want to forget that our utmost responsibility is to not make the world a worse place than it has to be.

Are there Black writers in the writer’s room now?

Yes, you’ve experienced some of the language of Kimberly A. Harrison and Eric Haywood. It does make a difference, and you can thank Dick Wolf for that.

Jennifer Beales plays your wife Cassandra in the series. What is your favorite part about the dynamic between Preston and Cassandra?

It’s that real love. At heart, these are good people, but they’ve made tough decisions to do bad things temporarily to get to a good breakthrough, to get to a good place. But is that possible? And those are the things that we’re navigating. But what I love about this relationship is that our two characters are madly in love with one another, but is what they’re expecting realistic? I just love it because they mean well, but they’re willing to sacrifice and do horrible things temporarily to make right later. They’re building churches; they’re building schools. They’re building mental health care facilities and clinics and communities. That’s the kind of work they want to do ultimately. They want to build the next Walmart, Amazon, and do it legitimately. That’s why they’re here for a year or so. The life of crime is beginning to weigh heavily on Preston and the audience will see more of that conflict. You’ll see how Preston and Nova [Nona Parker Johnson] come together to talk about their journey.

Doing good in the world. Just doing good in the world. No matter what I’m doing, anything, anytime I’m blessed, I know it’s not just for me — it is to be shared. I just follow my heart as my spirit is led because I’m a praying person. So my wife and all my daughters, we just are willing to sow into soil where it’s needed. For me probably the most exhilarating thing about life is that it’s not all about you.