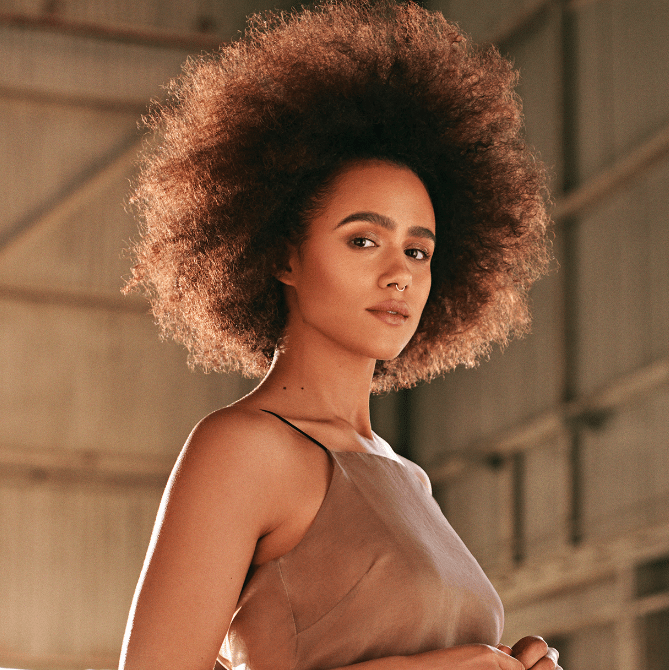 The energy Nathalie Emmanuel radiates whenever she speaks is nothing short than regal. Poised, yet still down to earth, she evokes a sort of quiet strength, much like her most notable character to date, Missandei from HBO series Game of Thrones. Despite the grandeur of that show and her new high profile starring role, the girl from a small, seaside town in England never envisioned this career. Never once did she think she would be a part of one of the most famous shows of all time, let alone alongside Hollywood’s biggest stars.

Over the course of the six seasons on Game of Thrones, her portrayal of the slave turned trusted advisor invoked particularly strong reactions from fans, especially when Missandei met her untimely death. As one of the few Black characters on the record-breaking show, the depiction of the character’s death in chains launched a discussion firestorm. With Game of Thrones now complete, Emmanuel tells Black Girl Nerds that she wished things happened slightly differently, in the end, particularly the closeness of Missandei’s relationship with Daenerys.

“I felt very proud of Missandei’s courage and bravery,” Emmanuel says. “I wanted to do her justice in that respect. She’d overcome unimaginable things. She did it with her head held high and was fearless and ferocious in a way we hadn’t seen before. If I were to change anything about how her story came to pass, we might spend more time with her and the people she loved. To make that part more significant and to revisit how special those relationships were.

“The last season was just so vast, and there were just so many stories to tie off, so I appreciate why that couldn’t happen. But in some alternate universe and my romantic mind, I would have loved to see Missandei and Danny be the best friends and confidants they were for each other a bit more in the final season. It was an honor. But if we had a longer season, I would have loved those relationships to be kind of natural before she met her end.”

Once her time in the Seven Kingdoms was complete, next came starring roles in Dark Crystal: The Age of Resilience and Four Weddings and a Funeral. Wasting no time securing her next high-profile assignment, Emmanuel now finds herself at the forefront of another story in the Quibi series, Die Hart.

The Quibi short-form series stars Emmanuel, opposite Kevin Hart, as Jordan King, an actress with ambitions of taking her career to action-film, leading lady status. Like Jordan, Hart (who plays himself) has his aspirations of becoming a big-time action hero. However, he’s been unable to escape years of being typecast as the goofy sidekick. For King, there are not enough leading roles available and looks to action films as her only chance at scoring top-billing.

At the request of a famous director, Hart enrolls in a stunt school and begins his journey to toughen up. It’s there he meets Jordan, his lone confident and bunkmate.

As they begin their training under the tutelage of an eccentric instructor, Coach Rob (John Travolta), Jordan and Kevin find themselves cut off from the rest of the world. With no distractions or other people around, a series of unexplained, dangerous accidents occur in the camp, at least from Kevin’s point of view. Kevin and Jordan rely on each other to not only complete the stunt person training but not to die in the process.

Reminiscent of films like Mr. and Mrs. Smith and The Truman Show, Die Hart transforms Emmanuel. In the beginning, she’s from an uncertain actress at the end of her wits. As she embraces stunt school, she begins to morph into a kick-ass stunt woman.

After spending a considerable chunk of her career in dramatic roles, Emmanuel says it was fun to get physical and do comedy for a change. Working daily with Hart and Travolta was all the inspiration she needed to bring her A-Game. From the physicality to the light-hearted banter, she says it was fun to do something wholesome. Not the mention being able to make it through an entire shooting without someone dying outrageously.

“It’s always nice to do something fun and light and wholesome. It was just such a different kind of thing. I was on “Game of Thrones” for a long time where it was so intense with people get killed and impaled on things and burn alive. But this is just as exhilarating.”

One thing is for sure, Emmanuel is no one-trick pony. In fact, Die Hart may be just the right conversation to put her in position for her next significant role. Bond girl, anyone?