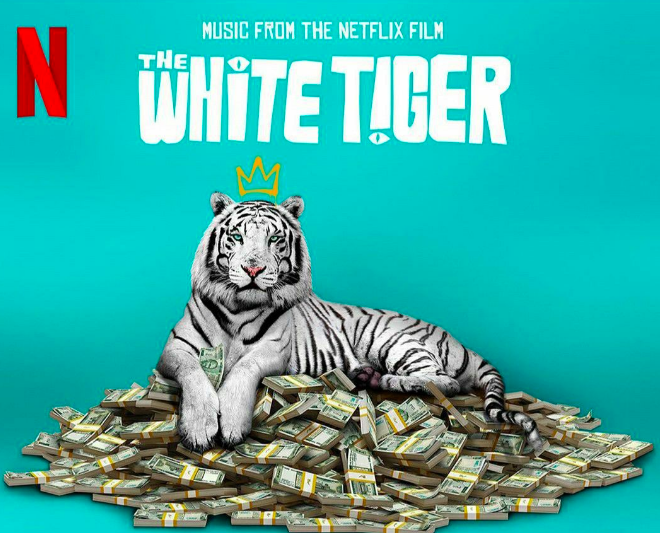 Netflix’s The White Tiger is a rags-to-riches cautionary tale for our times. The film, based on the award-winning book written by Aravind Adiga, follows the journey of Balram (Ardarsh Gourav) journey from servitude to a wealthy entrepreneur. The film starts in 2010. Balram embodies the White Tiger as he crafts an investment pitch, via email, to the Prime Minister of China, who will be making a trip to India to meet with entrepreneurs.

The story flashes back to Balram’s childhood where we meet his family, who are all members of the Halwai caste. India’s caste system divides people in the Hindu religion into four strict categories that define access to education, health care, social mobility, and economic resources. Balram’s family are “low caste,” makers of sweets, destined to work only in tea houses for little income.

Witnessing the hard work it takes to run a tea house in a poor Indian village makes me remember that luxury comes at a price. A major part of America and Europe’s wealth was built on the forced free labor of enslaved Africans on sugar plantations in the West Indies and American South.

Next, the narrative reveals the family power structure. The best fed and valued members of the family are the cows, goats, and oxen, next comes Granny (Kamlesh Gill), who forces his brother Kishan to work in the tea shop while taking every rupee from his dad, who is a rickshaw puller. Young Balram walks by a river as the camera takes in a white couple doing yoga contrasted with poor people bathing in the polluted water. Balram sums up India’s caste system in a voice over. “India is two countries in one: an India of light and an India of darkness. I think a rich man like you knows where I come from.”

Balram, the second son, is allowed to go to school and shows promise. When a school administrator visits his class, Balram stands out. Balram is declared the White Tiger, a rare gem of a generation, and is offered a scholarship at a school in Delhi. Balram’s high hopes for an education are shattered when his father, who is always in debt to the landlord, can’t pay the administrator a “fee” for a scholarship. Granny forces Balram to leave school to work as a servant at the sweet shop with his brother. Now, you may think working in a sweet shop doesn’t sound so bad. In reality, it means Balram spends his time pounding large chunks of coal into smaller bits with a hammer, sweeping the dirt floor in the tea house, and serving the customers all under the watchful eye of the tea shop owner.

Next we meet the village’s greedy landlord, the Stork (Mahesh Manjrekar) and his eldest son Mukesh aka “the mongoose” (Vijay Maurya). Like a stork scooping up schools of fish, the greedy landlord grows fat off the labor of his tenants. Fierce brutality is a vital tool for subjugation. Even though poor people are the majority, the powerful stay rich. Balram’s father comes down with tuberculosis, and they travel two days to a neighboring village to see a doctor who never comes. Father dies. Balram’s voice over reflects, “Election promises had taught me how important it is not to be a poor man in a free democracy.”

Years pass. Balram is a young man with a plan. As he works at the tea shop, he takes in as much information as possible and discovers that the Stork’s youngest son Ashok (Rajkummar Rao) is moving back to India from the United States with his Indian-American wife Pinky Madame (Priyanka Chopra Jonas) to learn the family business and needs a driver. Balram makes a deal with Granny to lend him the 300 rupees needed to break caste, get a driver’s license, and become Ashok’s driver. Granny forces Balram to promise to send the majority of the money he earns as a driver back to the family in exchange for the loan. He agrees and is on the next bus out of there.

It’s striking to see, throughout the film, how efficiently the caste system supports the rich. The driving instructor (Balvinder Singh Baryah) immediately scolds Balram for even attempting to learn how to drive because of his caste. Determined, Balram learns how to drive and uses his tenacity to become Ashok’s driver. His dream job reveals how a life in servitude is just another kind of death sentence.

Like 2019 Best Film Oscar winner Parasite, The White Tiger reflects how systems of power pit folks without resources against one another fighting for scraps for just a taste of a better life.  There’s also the similar themes of the relentlessness of poverty, and how the rich stay rich by underpaying and overworking staff while simultaneously profiting off low-wealth communities without shame.

Ardash Gourav’s portrayal of Balram is absolutely flawless. Witnessing the decay of Balram’s earnest love and faith in his employers is relatable, particularly now. The quality of Balram’s life is tied into how effectively he cares for his masters, so he stays toxically positive in order to survive. What really resonated with me, as someone who spent many years as a theater artist in New York working a day job as a private chef for the wealthy, was the entitlement, disrespect, and passive aggressive cruel stinginess that many rich folks inflict on the people who work to take care of them. In a heart-wrenching moment of revelation towards the end of the film, Balram muses, “The rich never give anything for free.” The White Tiger is the dark revenge movie for anyone who has worked for a wealthy boss from hell.

The directing was sharp, clean, and achingly clear. I lost myself in the story and believed every single actor’s contribution to crafting this tale. Although the story centers a male character, three female characters, Granny, the Great Socialist (Swaroop Sampat), and Pinky Madam, drive the storyline. All three are negative in their own ways, which is unfortunate.

Jonas does an excellent job of playing the progressive feminist New Yorker educated at NYU who, when faced with self-protection, makes devastating choices. The only love interest Balram has time to invest in is the care he takes for the master, which is heartbreaking. Ava DuVernay and Jonas are both executive producers of this powerful project. It’s inspiring to see women as creative driving forces of the film.

“Eat the rich!” was a rallying cry for the peasants of the French revolution. A generation later, the descendants of French revolutionaries grew rich from the forced free labor of enslaved Africans and Asians using the most brutal forms of punishment to maintain their power. The White Tiger reflects the brutality of privilege achieved by forced dominance.

Halfway through the film, Balram’s voiceover asks the question, “Do we loathe our masters behind a facade of love…or do we love them behind a facade of loathing?” When Balram finally realizes how much he sacrifices for his masters, he takes actions that change his destiny. I highly recommend Netflix’s The White Tiger. What a ride.

Written and directed by Ramin Bahrani.