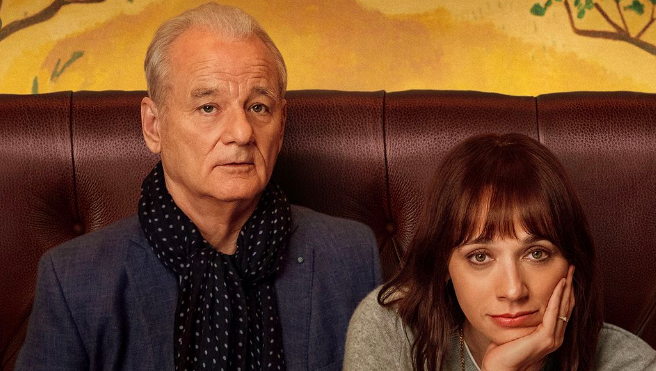 In the midst of what feels like a never-ending pandemic, there are silver linings outside of spending time with family, one of them being the film On The Rocks. This much anticipated new film has hit the New York Film Festival and has critics already talking about it.

The feature is imbued with all the insight and wit one would expect from a Sofia Coppola film. Similarly to Coppola’s past films, this one somehow manages to take hold of the everyday sadness and brief moments of humor that many people experience and portray it in a way that reflects reality.

The opening scenes of the film are adorably sweet. The newly wedded couple Laura (Rashida Jones) and Dean (Marlon Wayans) are sneaking out of their own party to dive into a pool and swim. Their exciting and carefree attitude sets the stage for the rest of the storyline — or at least it would in most other films. However, this is not most films, this is a Coppola film. The next scene establishes what happens after so many years later of this wedded couple’s lives. Their free-spirited nature is now deadened with responsibilities like work and family obligations — a surprising reveal for two free-spirited individuals who snuck out of their own party.

Coppola’s films have a style that is uniquely her own. She manages to take bits and pieces from everyday experiences and transform them into a work that draws many in. There is a hidden sadness within this feature that will appeals to audiences. While the plot of the film begins a little slower than expected, the mundane, ordinary life is really hammered home with the monotonous daily routines that repeat. Vanessa (Jenny Slate) adds the perfect touch of humor when she tells Laura about her never-ending escapades as they wait in line day after day. With insecurities, embarrassments, and even moments of happiness as fleeting as they are, Coppola manages to capture them with great range from her actors. The cast of this film is just spectacular.

Laura is a writer living in New York City with her business husband, Dean. She takes her kids to school, gets coffee, talks to her friends and family, and works on her book. This would be the embodiment of what most would consider a good life. However, most things aren’t as picture perfect as they appear, and for Laura, there are aspects that are less than. When Dean fails to mention that Fiona (Jessica Henwick), who is his attractive business partner, left a personal bag in Dean’s luggage, Laura starts to suspect something is up. Her suspicions are raised even higher when her father Felix (Bill Murray) gives insight from a male perspective on her situation with her husband. Together Laura and her father go off on an adventure of truth, and their relationship becomes closer for it.

Fan favorite Murray makes his character Felix come to life. He is just classic. The character he portrays is a womanizer who is sophisticated and, at times, even a little glamorously elegant. When Felix talks about the nature of man and the history of humanity, you truly believe he is a pure human being. If he is not traveling the world selling art, he is having a meal with his daughter Laura. He has defined for himself what a human is and lives by that definition — a carefree individual, who has the means to do what he wants when he wants. He is not afraid to live the life he wants, and that in and of itself is beautiful.

Despite a lot of his choices he has made that has brought him pain, he still appears content with his life. That is an aspect of his character that truly shines in the film. Despite this playboy persona he puts on, he is still encumbered by the hurt he has caused others. That is the magic that Bill Murray’s abilities as an actor bring to the screen.

The acting is what you would expect from two seasoned comedy actors like Bill Murray and Rashida Jones. It is a careful curation of insecurities that many sometimes feel. Jones is honest. When you see Laura going through her day in the big city, it not only makes you long for the everyday and ordinary but also a sense of normality. Her life, while it seems mundane to her, is actually a welcoming and refreshing take on a reality many once had. Her character really captures the daily sadness that we all have. Yet, when Laura goes through her daily routine, she does it in a way that reminds us all that our troubles are legitimate and things will get better.

Marlon Wayans is simply adorable in his role as Dean. His character feels like the boy next door. So, when the idea of infidelity drops, it’s almost heartbreaking that such a loving guy would try something like this when married. His career choice doesn’t help his marriage since he is often gone for work to distant locations. When the evidence keeps piling up, it is almost crushing to see his image be tainted. This is in part due to the terrific writing, which allows Dean to appear honest at any one point and incredibly suspect the next.

The film On The Rocks is adorable, insightful, and at times sad. It is not a laugh riot from start to finish, but it does sprinkle humor when it is most needed. The film envelops the audience in the lightness of everyday life. With its amazing cast and unique story storyline, On The Rocks is perfect for anyone looking to take a break and enjoy the mundane world that was once common and maybe take a nugget of happiness from it.

Bill Murray, Rashida Jones, and Marlon Wayans Star in ‘On The Rocks’