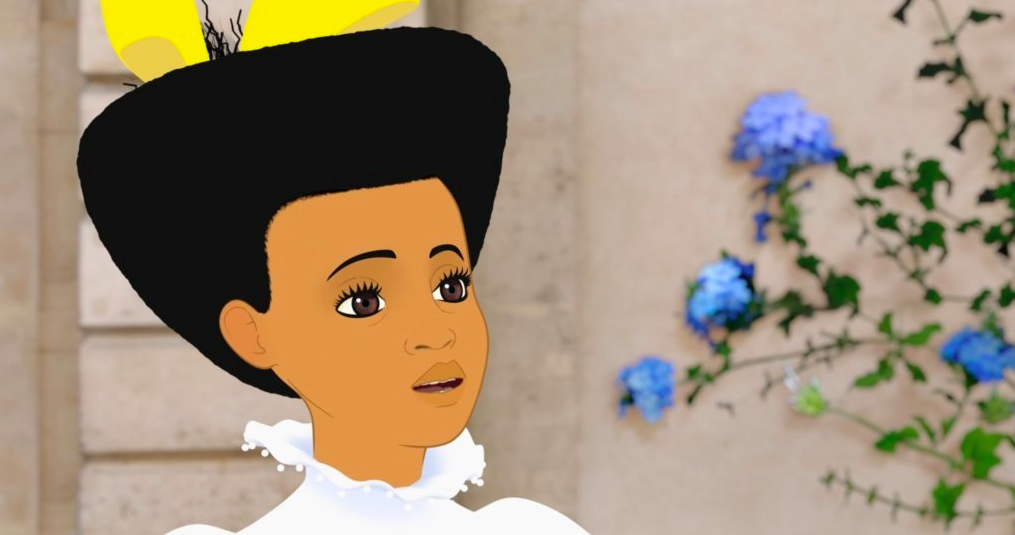 Michel Ocelot’s Dilili in Paris places a beautiful and articulate, Black girl at the center of the storyline and it’s a beautifully animated film to witness.

Dilili in Paris is an animated film that takes viewers on a rich journey that gives a comprehensive glimpse into French cultural history during the La Belle Epoque era. Dilili, a lovely, young Kanak and French girl accompanied by Orel, a delivery boy get caught up in a mysterious plot — that allows Dilili to see the beauty of Paris during one of its finest times of artistic, literary and musical enlightenment. From Colette to Marie Curie, Gustave Eiffel to Sarah Bernhardt, Zola to Camille Claudel, and so many more, Dilili in all her beauty and grit is warmly embraced by some of the greatest minds, leading inventors and artists of this epoch time in Parisian history.

It’s the turn of the late century and young girls are being stolen. Dilili and Orel, a Parisian ally, are on a quest to get to the bottom of this mystery. Initially, the plot seems long, drawn-out and predictable, until Dilili herself is stolen and we come to learn why these young girls are being snatched, and what is actually happening to these girls and young women underground. “Master Men” a secret society of power-hungry men associated with the power-structure of Parisian society, feel threatened by the recent enlightenment and advancement of women. They seek out to suppress the newfound female place in society. In Dilili in Paris the storyline is very interesting, and while at times the animated film is very child-like, at others the messages conveyed are quite prolific such as: the fear of the advancement of women, the love/hate relationship that some people have with brown beauty and the allies to disenfranchised demographics throughout history. In Dilili in Paris, Dilili has genuine allies in high places of influence.

Dilili As A Beautiful, Smart Human Being and Not the “Tragic Mulatto”

What I loved most about Dilili in Paris is that Dilili was not showcased as the tragic mulatto. As a multi-racial pretty brown girl who is Kanak and French, she is well aware of the effect that her appearance has on others, yet this is not what defines her. She’s smart, sensitive and in tune with others’ perceptions of her. At one point Orel, gently reminds her that “Your difference is what makes others want to meet you.” While she is attractive, throughout this film she is revered for her essence, articulate and sound judgment, and her gracious manner. In the words of Orel, “You’d be a steal for the Master Men.”

Considering the historical legacy of European infatuation with brown skin, this statement is loaded. However, Ocelot steers clear of the tragic mulatto trope and showcases Dilili as she truly as a beautiful human being. An individual who is eager to learn, and needing love just as any other human being does. There are times when the divisive construct of race categorization rears its head. On an occasion, she’s referred to as a “monkey” or her impeccable French is emphasized a bit too much by the Parisians, but overall Dilili’s depiction in this animated film is a delight to see. She is not overtly oppressed. She has the privilege of living with an extremely wealthy Countess who has genuine compassion and concern for her and she has had access to great educational experiences and fine clothes. However, at one point Dilili states, “They give me pretty clothes, but no money.” This statement could quite possibly be an allegory of the notion that many have the appearance of freedom and liberty, yet are still in financial bondage.

Those in Power Come Searching For The Stolen Black Girl

Nevertheless, in this film, those with influence and power come to find Dilili when she is stolen by the Master Men, and they genuinely want what’s best for her. I found this part of the story quite rewarding. Another beautiful theme within this film is the universal need for everyone to be found and loved. As an orphan, Dilili still craves hugs and affirmation and within this film, she receives lots of hugs and positive affection. It was a lovely visual to see the legendary opera singer Emma Calve teaching Dilili the lovely art of hugging. As an orphan and stowaway, Dilili is estranged from her native land and people, yet the film ends with the notion that she has found her place nevertheless, and that she will be more than okay. She will excel. 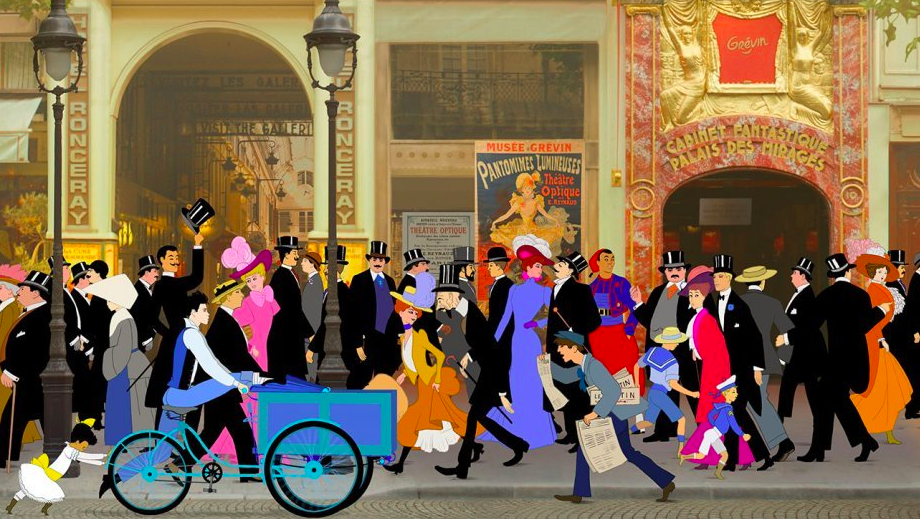 This animated film is aesthetically pleasing to look at. Great attention and detail are given to the costumes, setting as well as the historical and cultural landmarks showcased throughout. From the white and yellow vibrant attire that Dilili is adorned in to the feathers and furs draping the female icons within the film, everything just looks immaculate and gorgeous. Ocelot’s placement of these 2-D characters alongside authentic-looking, photo-realistic Parisian landscapes really makes a strong impression. Various shades of magenta, lavender, turquoise and yellow drape the bodies of characters and backdrops, while lights and ornate decorations align the streets of Paris. It is quite refreshing to see Paris through the eyes of a little Black girl during its heyday.

Directed and written by Michel Ocelot, and produced by Christophe Rossignol and Phillippe Boeffard; Dilii in Paris provides a succinct cultural road map for a very vibrant time in history. While the animated film is very kid-friendly, it is truly sophisticated enough for astute adults who can appreciate the beauty, art, and literature of this time period.

In French, With English Subtitles

The showtimes for viewing “Dilili in Paris’ at the New York International Children’s Film Festival can be found here: https://nyicff.org/films/dilili-in-paris/