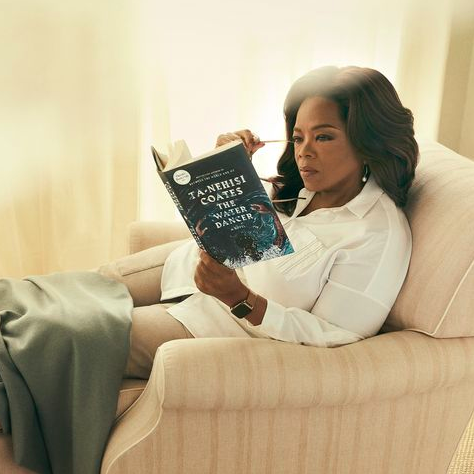 On September 23, Oprah announced her newest Book Club pick — Ta-Nehisi Coates’s The Water Dancer — and if you haven’t joined the conversation I’m here to tell you it’s not too late!

It wraps you up in the intriguing mind of Hiram as he unravels what it means to be a member of the Tasked, who exemplify excellence but are subjected to a life under the Quality, who demonstrate inferiority within their own lifestyle.

Oprah’s Book Club, which you can join now on Instagram, poses many discussion questions that you can openly respond to in the comments under her posts or even on your own instagram with the tag #OprahsBookClub. This is an amazing way to not only connect with other readers and Oprah Winfrey herself, but also connect more deeply and insightfully to your reading.

As we have now finished Part One of The Water Dancer, a few of the most striking questions Oprah asks for me are:

“Why did the author use the terms Tasked and Quality to represent the power dynamic?”

I feel Ta-Nehisi Coates was illustrating a vibrant picture for his readers when doing this. He steps away from the repeated use of “slaves” and uses “Tasked.” It forces the reader to view the slaves’ narrative in a sense that is productive rather than restrictive. Meanwhile, the use of “Quality” also forms a different sense in a reader’s mind that is different from “owners” or “masters.” I think using Quality allows the reader to view the Tasked as more valuable than the Quality. Which I hope is Coates’s intention.

“Why do you think the author wants us to think of memory as a superpower?”

Coates wants us to view memory as a superpower because that is what all power in the world is formed from. As long as people can remember their past, then a brighter future is to come, even if the memory is not of their own past but the mistakes of misfortunes of another. These instances are lessons, and one who can employ these lessons to their present has a higher chance of manifesting a better future.

“What do you think changed for Hiram that staying at Lockless became impossible so that he felt that need to flee a burning house?”

Since he got to Lockless, this change had been occurring in small increments that eventually built to larger ones. The first change occurred when his father told him that he would be his brother’s personal slave and discontinued his studies. This was the point that convinced Hiram that he was not family. Even though it was clear that he was better and more qualified than his brother to take over Lockless, he was still a slave. The next came when he began to fall in love with Sophia. The reality of his existence set in through every conversation he had. It was as though he slowly pieced together that he could not allow his soul to belong to anyone inferior to himself. Lastly, the large turning point to this revelation was the dream he had of Maynard dragging all of the Tasked down with him. After this point, Hiram begins to articulate that he cannot be slave to his current existence.

It’s okay if you’re a bit lost by these discussion questions. Hit up @OprahsBookClub on Instagram and catch all of the juicy details. Oprah outlines page numbers and significant quotes that directly identify with each question. Here at Black Girl Nerds expect a short recap and discussion every week. Oprah has the scheduled chapters broken down on her Instagram. To follow along with us here at Black Girl Nerds in response to some of her questions, be sure to follow @OprahsBookClub and never skip a beat.