Production on Mary Poppins Returns has begun.  Disney’s sequel to the 1964 film Mary Poppins, is now filming at Shepperton Studios in London. Helmed by Oscar-winning director Rob Marshall (Chicago), the film stars Emily Blunt (Into the Woods) and lyrical bae Lin-Manuel Miranda (Hamilton, Moana). I will pray every day from now until Oscar night that Lin-Manuel’s “How far I’ll Go” snags him the illustrious PEGOT – (Pulitzer, Emmy Grammy Oscar, and Tony – Lin-Manuel possess all save the Oscar) but with Hollywood favorite La La Land, he will likely have to keep waiting. If you are hoping the new Mary Poppins reboot will give Miranda another bite at the apple, I am sad to inform you, he will only pull acting duty in the musical adaption. I love Mr. Miranda as both an actor and composer but don’t we all want to see him do both?  To be honest, I also want him to compose the soundtrack to my life – unlikely, but a girl can dream. 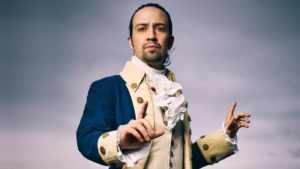 Alongside Blunt, playing the title character, the Hamilton composer will reprise a role a similar to Jack the chimney sweep originally portrayed by fellow co-star Dick Van Dyke in the 1964 original. The film also stars Ben Whishaw (Spectre), Emily Mortimer (Hugo) and Julie Walters (Harry Potter films) with Colin Firth (The King’s Speech) and Meryl Streep (Florence Foster Jenkins).  Dick Van Dyke plays Mr. Dawes Jr., the chairman of Fidelity Fiduciary Bank, which is owned by William Weatherall Wilkins (Firth). Though all exceptional actors you can’t help but feel there is perhaps a missed casting opportunity here, with Lin-Manuel being the only person of color in the main cast. I could wish it were different, but it can’t make it true. Disney has made numerous strides in recently years to be more inclusive, but perhaps a more conscience effort could have been applied to the Poppins casting, as well. Mary Poppins Returns also introduces three new Banks children, played by Pixie Davies (Miss Peregrine’s Home for Peculiar Children), Nathanael Saleh (Game of Thrones) and newcomer Joel Dawson.

The film has pedigree behind the camera as well, produced by Marshall, Golden Globe® nominee John DeLuca (Chicago) and Oscar® and Tony® nominee and Golden Globe winner Marc Platt (La La Land). The screenplay is by Oscar nominee David Magee (Life of Pi) based on The Mary Poppins Stories by PL Travers with Tony winner Marc Shaiman (Hairspray) and Tony winner Scott Wittman (Hairspray) writing all new songs with Shaiman composing an original score. Not intent on being a rehash of the 1960’s classic, Mary Poppins Returns is set in 1930s depression-era London is based off PL Travers’ additional seven books. In the story, Michael (Whishaw) and Jane (Mortimer) are now grown up, with Michael, his three children and their housekeeper, Ellen (Walters), living on Cherry Tree Lane. After Michael suffers a personal loss, the enigmatic nanny Mary Poppins (Blunt) re-enters the lives of the Banks family. and, along with the optimistic street lamplighter Jack (Miranda), uses her unique magical skills to help the family rediscover the joy and wonder missing in their lives. Mary Poppins also introduces new colorful and whimsical characters, including her eccentric cousin, Topsy (Streep).

PL Travers first introduced the beloved nanny in her 1934 book Mary Poppins, which Disney adapted for the screen and released in August 1964. The story of the adaptation was the basis of the 2013 film Saving Mr. Banks starring Tom Hanks and Emma Thompson. The 1964 Mary Poppins was directed by Robert Stevenson, starred Julie Andrews and Dick Van Dyke, was the top-grossing film of that year, and won five Academy Awards. Until now the subsequent adventures of Mary Poppins remained only on the pages of PL Travers’ books. Now we will get so see on the screen what the Banks children got up to, and the new adventures of their children with the iconic British nanny.