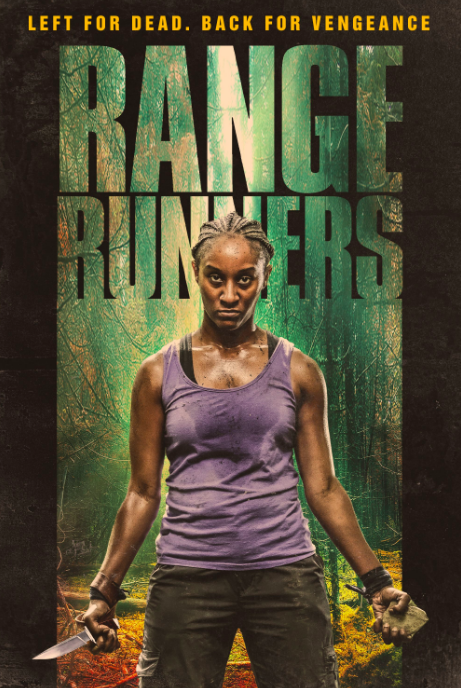 There have been countless sports films, and more and more people are invested in the sports arena. Their involvement ranges from the love of the sport to an aspiration to have similar talents, to other more social or cultural reasons. Whatever the reason for their enthusiasm for sports films, here is another one to add to the list.

Range Runners (2019) is a film directed by Philip S. Plowden and co-written by Devon Colwell. This thriller investigates one woman’s determination to keep pushing and to persevere even when the situation seems impossible. Her push to do better and to expect more from herself was instilled in her by her father. It is because of her father that she has grown to value her own abilities and has pushed her into becoming a valiant runner. Range Runners is an appealing attempt to captivate its audiences with a runner’s story, but falls short of an enthralling plot.

Range Runners follows the main protagonist Mel (Celeste M. Cooper), who is determined to run the range on an unnamed mountain path in the opening scene of the film. While running, any time Mel hits a rough spot, the scene changes to the younger Mel (Mariah Gordon) with her father Howard (Carl Clemons-Hopkins) on the track. Mel remembers bits and pieces of the words of wisdom her father passed down to her all those years ago. Mel is on a personal mission and is determined to make her way through the treacherous path that is laid out before her.

On Mel’s adventure of self-reliance and realization, she always has her sister waiting for her at the end of her trips. Mel’s sister Chloe (Tiffany Renee Johnson) provides just barely enough background story to round out Mel’s world. On their trip from the hotel to the running path, Chloe tells her that their mom thinks Mel is wasting her time running. Their time together is brief, but it does provide a sense of sisterhood and caring. While fleeting, it gives a connection to when Mel sees her sister again in eight days. Just outside of their interaction, there is still not much to go off on as to why their relationship seems so strained. Even with the explanation that is revealed further into the story, it just does not feel fully developed.

Soon after Mel leaves her sister, the main villains of the story are revealed: Wayland (Sean Patrick Leonard) and Jared (Michael B. Woods). Both are two felons who have little in terms of background and motivation. Wayland wants to get the job done and will not let anything stop him from getting paid; Jared is more cowardly and timid, wanting only to get the job over with so he can go back to his wife. There is only a handful of explanations, and most of them feel incomplete. Outside of needing the money and working with a third party, there is little that is actually known about these characters. This is just another part where the plot falls short of expectations.

Despite the lack of clarity and vigor in the plot, the saving grace in this film is Cooper’s acting and the beautiful cinematography. Her character gives the audience a real sense that she is a runner. There are scenes of her running down some paths, getting water from a local lake, and even some of her sleeping out in the woods. The camera shots that pan out into the forest are stunning. They show leafy greens, lushes browns, and clear waterfalls. These scenic views add to the wonder of the landscape.

While praise should be given to Cooper, there are instances that her acting feels a little over dramatized to evoke an emotion from the audience. However, it feels insincere. There are also moments where the situation calls for more of a dramatic response — for example, when she falls and gets injured. At times she seems almost inhumanly strong, but less than a superhero. Overall, her performance and the landscape are the best part of the film.

The thematic content of the film truly does work well to push out a running narrative. The intersectionality of a woman of color against the environment and those who want to cause her harm is an interesting take on a sporty running film. However, these elements are just not cultivated enough.

While Range Runners is entertaining for its bursts of energy, it is overall not that rewarding to sit through for almost two hours. This film does offer good values that many should take with them, such as persevere through struggles, never let someone make you feel helpless, and peace often brings happiness. But the story just is not there. There will be those who love to run who will find this film encouraging; others might find this movie to be a little tedious. The film has the protentional to be more but would have required a few more re-writes.

Range Runners is available on VOD.