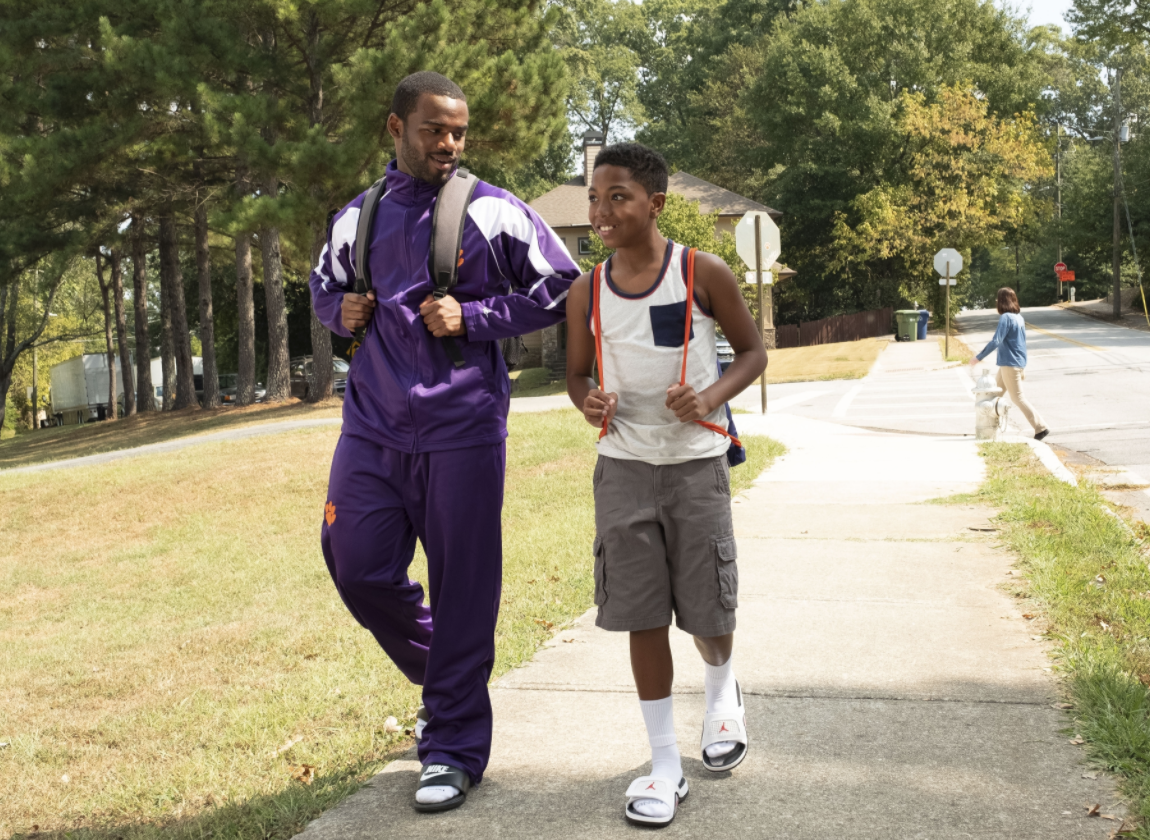 The latest Disney film, Safety, takes us back to 2006. I started college in 2006, so it was a bit jarring to see Disney take on the college freshman student-athlete experience.

2006 was the best time with college parties, leaning and rocking to Dem Franchize Boyz, being serenaded by Ne-yo, and running it with Chris Brown. As a freshman in college, for me it was about learning how to prioritize, staying on schedule, and taking in the independence that comes from being away from the parents. 2006 was a good time. The story of Ray McElrathbey tries to include all of the college staples and more, while giving us a deeply inspiring story about family and the lengths we should all go to for our loved ones.

Safety follows Clemson University football player Ray McElrathbey and his attempt to balance his freshman year on the team, his newly declared psychology major, and taking care of his little brother. When Ray’s mother is sentenced to a rehab facility for her drug addiction, Ray takes it upon himself to care for his younger brother Fahmarr. Sneaking around the dorms and locker room jeopardizes Ray’s football position, his scholarship, and his brother. What was supposed to be a thirty-day stay turns into months. With the help of his Tiger family, Ray has to learn to make the right calls and fight if he wants to succeed and give his brother the life he deserves.

Based on a true story, Safety is directed by Reginald Hudlin (House Party), with the script written by Nick Santora (Prison Break). The film stars Jay Reeves (All American), Thadeus J. Mixson, and Corinne Foxx (47 Meters Down Uncaged). Safety highlights how far someone is willing to go for the ones they love, but it also highlights how not all family is blood.

Without seeing the film, I was a fan of this story. I thought it would make for some provocative Disney coverage. There was so much potential with the story alone, but alas, it turned into a fan fest for the Clemson University football team. It was as if the true hero of the story was Clemson University and not Ray McElrathbey. The expectations were a family football film on the lines of Remember the Titans or even Invincible. Here is a topic about a young Black man having to step up for his little brother and learn to be a parent because of his mother’s drug addiction. The lack of a safe place due to drugs, gangs, and violence in the underserved Black community could have been a great story to tell. But for such a serious and emotional topic, this film had no tension. Any tension build-up was immediately fizzled out by the bubble gum, PG-rated, college campus or the white savior build-up backed by Disney dialogue. The reality of the situation could have been highlighted in a more complex manner. Again, the story is great. The way it was executed, not so much.

The film is led by a young cast that is new to the acting scene. Reeves falls short at times in his leading man duties, but overall he does all right. There are some moments where he keeps the audience engaged. But he also delivers some lines that fall flat. The star of the film is Mixson. He is young, but he is mighty. I could watch him in more movies. He is the one to watch in every scene he is in. His acting and reacting are already upper level. He commands the audience’s attention. As the little brother in the film, you feel for him the most. It is his character you are truly rooting for in the end. Foxx is okay. She does well in certain scenes as the lovable, understanding girlfriend. She is no stand out in the film, but she holds her own.

The big brother/little brother relationship is the real spark of the film. The chemistry between Reeves and Mixson is fantastic. They have that sibling dynamic down. Some moments reminded me of my relationship as the older sibling with my brothers and sister. Ironically, for a movie that is supposed to be about that sibling theme, I wanted more of it. Safety thrives with family moments. Those are the best acted and emotional scenes, but we needed more of them.

Safety is your quintessential Disney film. It takes a tough topic and tear-jerking story and makes it super family friendly. Even Oprah makes an appearance at the end with live footage of an interview with the real-life Ray and Fahmarr to wrap it all up with a nice bow for viewers. After you get over the shock of the style of the film compared to the subject matter, it is a safe film to watch with the young ones during this holiday break.

Safety is now available to stream on Disney+.