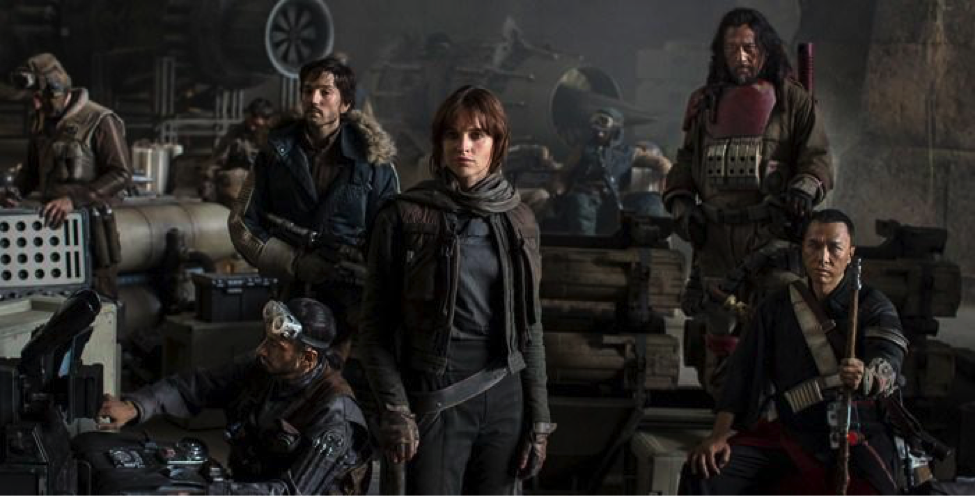 This inauguration day, I did something different. I turned all my social media off, and walked to my 10 am class. The day was dreary, perhaps a forewarning of what was to come. I try to keep my spirits high but it’s hard when it seems like every single media faucet is dripping with news of the Tr*mp presidency. I did what nerds do best, turned to my favorite franchises. I took my sad ass to the local theater to watch Rogue One for a second time. The stand alone film directed by Gareth Edwards holds a special place in my heart. It has easily replaced Episode One as my favorite film in the franchise. The standalone film stars Felicity Jones, Forest Whitaker,Donnie Yen, Riz Ahmed,Diego Luna, Jiang Wen as rogue agents tasked with stealing the plans to the Death Star.

I sat surrounded by many families with small children. It’s a movie that pertains to the next 4 years.   As an intersectional feminist who  navigates the world as a black woman, I left the theater both times with a sense of new hope , knowing that now more than ever we have to organize. What can we learn from the Disney Lucas film Blockbuster Rogue One?

“Rebellions are built on hope.”

I look at this quote on my lockscreen each day. It gives me encouragement to pursue my studies and continue writing. Cassian Andor says this early on in the film to Jyn Erso, both debating the idea of fighting back against the empire. Both are deemed hysterical by outsiders but this quote eventually becomes a rallying cry in the film. In the film. Jyn Erso and Cassian both set out to look for the Death Star plans. However, they are met with opposition from the rebel fleet. Our crew of unlikely heroes uses their talents to bond together and get the job done. They rely on the faith of Chirrute Imwe; the strategic mind of Bodhi Rook; the combat experience of Baze; the intelligence of K-2SO; and the tactical expertise and leadership of Jyn and Cassian.

“I’ve never had the luxury of political opinions.” – Jyn Erso

This quote is said by Rebel soldier Jyn Erso , the main protagonist in the heat of the moment where she is questioned about her morals and character. Often times we have to challenge the intentions of the people around us.   Because on our college campuses, social media, and basis of our country’s legislation we want and inclusion. We must push for equity. Now more than ever we have to fight for each other.

Many millennials, are  now awakening and in a state of panic. However, I, like other millennials of color know that , this situation is not new. These past few weeks, of sudden panic from my white peers on my news feed and in my class greatly annoy me.

This essay isn’t about my complete discomfort with my white peers, but I would not be honest if I didn’t express my frustrations.  Our Muslim identifying friends are now having their   humanity questioned with new government initiatives.

If the past few years has shown me anything, it’s that disenfranchised people have never had their experiences valued when it comes to state sanctioned violence. Movements like  Black Lives Matter,  Not One More, and anti-Islamophobia campaigns have gained momentum post Ferguson, Baltimore, Orlando, and Charleston.

With the Election of Trump we have seen the trickery of the empire with corporations more invested in pushing a deadly regime than recognizing the humanity of millions. Media   is becoming more fabricated. Dictatorship is becoming more normalized.  This is something many nerds globally have seen written in the pages of our favorite dystopian novels, fandoms, and fanfiction.

“Save the Rebellion. Save the dream.” – Saw Gerrera

When I think of this quote   I think of the sudden disenchantment I felt almost instantaneously after the election.  November 9th, I felt my world slow down, seeing my friends mourn or leave their homes, in a sea of statuses, tweets, and blog posts. It seemed like hopelessness ensued.   I saw more Trump supporters appear on campus.   I became annoyed seeing people ignore the plights of non white and non christian people.   I felt grief   in the 72 days between his election and his inauguration. Still, I feel this strong   impulse to galvanize my social media pages.   I’ve been working on stuff with my friends to organize on campus events. I’ve been reading more about trauma and mental health. I find myself sharing myself more and more.

In my   experience,   oppressed people are always taught to wait for peace and justice. But when we are up against a system or structures that   do not recognize our humanity, now is always the time. We fight for our sibling who cannot fight, our ancestors before us, and our descendants after us. Find people who want to fight for the the same things and mobilize.

Center our undocumented, our non christian friends, femme identifying friends, and members of the LGBTQIA community. Now more than ever we have to assert ourselves in the streets and online.

“I’m one with the Force. The Force is with me.” – Chirrut Îmwe

I have a troublesome relationship with my faith as of late with the election of Donald Trump. There has not been a day that I have not been angry. I have lost a few friends on my social media who think I have been too keen on my stance. My annoyance with them is that they don’t understand how harmful these new laws  for so many people .

There’s not a day I am unconcerned about my friends and our autonomy. I find myself trying to remain positive in the face of the empire. I know that with everything that my organizing has taught me thus far, is that it’s importantly try. Each action we try may not turn out how we want it to be, but we still gained something. We need each other I know that in the future there will be times where we are faced with adversity, but we still have to stand   vigilant.

Rebellions are built on hope, and that should not be taken lightly.