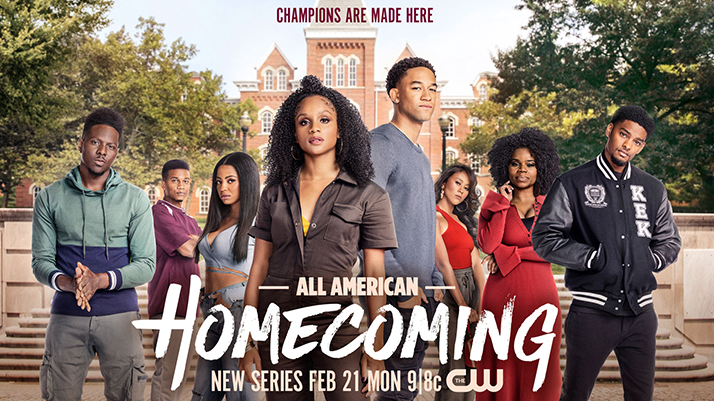 The CW has graduated high school in Beverly Hills and is entering the halls of Black excellence at Bringston University in Atlanta. This fictional HBCU appears in the All American spin-off show All American: Homecoming brought to us by showrunner/executive producer Nkechi Okoro Carroll.

Attending an HBCU has the benefit of a guaranteed environment where Black students are no longer in the minority. It’s a place that puts Black students on center stage as they come into their own. Or as Olivia Baker (Samantha Logan) from All American explains: it’s “a college where I don’t have to explain or defend who I am.”

The highly-anticipated All American: Homecoming is a sports drama with a story that revolves around Simone (Geffri Maya, All American), a hopeful tennis player, and Damon (Peyton Alex Smith, Legacies), who gave up a fast track to the MLB for higher education (and freedom from his overprotective mother). High school may have been drama with a capital “D,” but Bringston promises you haven’t seen anything yet.

Simone comes to Bringston with no connection to her old life except for her aunt, Dr. Amara Patterson (Kelly Jenrette, Manhunt). Amara is a journalism professor at Bringston who’s never been afraid of a little controversy. No sports drama would be complete without a rival, and Thea (Camille Hyde, Katy Keene) delivers on that for Simone. Keisha (Netta Walker, Come as You Are) and Nate (Rhoyle Ivy King, The Sex Lives of College Girls) are ready to help Simone navigate Bringston.

Damon is navigating a life he never planned for with help from his childhood friend and now teammate, JR (Sylvester Powell, Five Points). JR has his hands full between helping Damon go from star player to one of the team, all while trying to solve his own mystery. Marcus Turner (Cory Hardrict, The Outpost) balances his new job as head coach after a cheating scandal cost his team several star players.

When first meeting Simone in the second season of All American, I remember thinking, “This is the worst way you could ever introduce a character.”  After Simone reveals that, out of fear,  she lied about the paternity of her pregnancy, it puts her in an unfavorable light. That, was a premature judgment as we see her character more fleshed out. I forgot these were writers I could trust based on how much I enjoyed All American to that point. We get to know how intelligent she is, how much she cares about the people around her, and the lengths she’ll go to help her friends. She went from announcing her pregnancy after a one-night stand to seeking the love and approval of family to becoming a person pursuing her own goals.

Towards the end of All American’s third season, viewers get introduced to Bringston University. The school highlights diversity not just in terms of the number of people of color, but the personalities within those groups. Simone is lost after being denied admission at Princeton University, but at Bringston she finds a sense of fulfillment that she attributes to being surrounded by her own people. She gladly makes Bringston her choice. All American: Homecoming brings heart and drama to every episode.

From Episode 1, “Start Over,” we see Simone saying goodbye to Beverly Hills as she checks into her dorm. Damon escapes his last press conference and is eager to start training with the weight of saving the baseball program heavy on his shoulders. Both of our freshmen find themselves unprepared for life at Bringston. Amara is dealing with the aftermath of a scandal and Marcus is finding his way from assistant coach to head coach and hopefully out of his predecessor’s legacy.

Through the next four episodes (“Under Pressure,” “Love and War,” and “If Only You Knew”) we watch the students as they make and lose new friends and foes. Transition is always tough, and this remains true for Simone and Damon. They both make some bad calls and are confront new challenges they have no choice but to meet. But with the help of their newly chosen family, they are one step closer to owning their place in continuing the legacy of this illustrious HBCU.

Their’s aren’t the only journeys we follow. Of course, there’s Amara and Coach Marcus, but we also meet Keisha (Simone’s guide during the All American backdoor pilot) and Nate. Nate is a free spirit who is nice and helpful to Simone, though he’s not afraid to define his boundaries. He’s such a fun character who provides a little much-needed comedic relief, and if you’re not careful, you just might learn something from him along the way. Keisha has to choose between upholding her family legacy or following her heart. It’s a relatable journey and one that gives her a lot of heart.

Trying to battle everything on your own is a recipe for disaster. Our students bond together to help one another through their treacherous first few weeks. They help each other find their stride and inch closer to their goals.

However, it’s not all roses and sunshine. All American: Homecoming has its fair share of villains. Simon bumps heads almost immediately with another student Thea. and while she does throw the occasional crumbs of respect, Simone has a lot of ground to tread to ensure her team is at peace. The issue of teamwork is a throughline for many of the characters as Damon tries to heal team morale in questionable ways. All American: Homecoming doesn’t shy away from timely topics.

It’s an interesting concept to give a character who only arrived in the third season their own spinoff. All American: Homecoming does well to create a new drama with a familiar feel.

All American: Homecoming is a dynamic show full of sexy college adventures. A measure of success of a spin-off is its ability to stand on its own, and this show has proven that it can do so from the first episode. I am happy to see that there is more than one queer character on this show. I was particularly charmed by King’s work, and I hope to see them join the main cast soon.

All American: Homecoming premieres on the CW on Monday, February 21, 2022 (9 pm ET/PT). Like my girl Keisha says, tune in for the fun of a “beautifully melanated HBCU experience.”