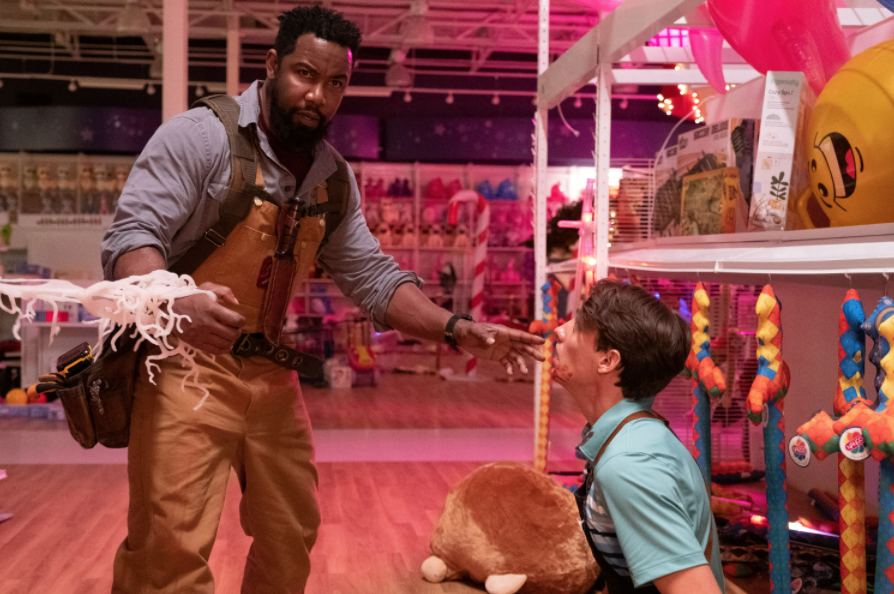 Black Fridays are horrifying enough for workers in retail at a big box store — now someone has finally decided to step in and dramatize this day and convert it into a full feature film.

The horror-comedy Black Friday delivers what it promises: a day in the life of retail workers when they experience unruly behavior, horrifying evils, danger at every turn, and then monsters show up and try to kill them.

Audiences will only be slightly relieved when they realize that the enemies in the film are not the too-enthusiastic bargain hunters out to save a buck but instead the evil creatures that have taken over the customers for a common goal that can only be theorized as the end of the world. Black Friday has a certain appeal that lures horror and comedy lovers alike. However, just beneath its sheer veneer of horror and comedy lies a hollow shell that contains just enough cheesy morsels to make this film endurable enough to enjoy.

Black Friday’s premise is one of an ordinary night that quickly takes a turn for the unexpected when an abomination from outer space crashes the party and seeks to infect all humans and merge them all into itself in a zombie-like fashion. The film doesn’t fully explain where these creatures came from or why they went to these big box stores, and little is actually known about what they are throughout the film. A few things in the film don’t add up and only get more confusing as the story continues.

The opening centers on a big box toy store named We Love Toys, in which there are a handful of workers, which might just be the most believable aspect of this film. Having only two or three checkout lanes open does seem to be in line with how many corporations are operating these days. These few cashiers get the first glimpse of horror when something sticky falls on their cash register keyboard and when customers spout off derogatory phrases at them. All these things might just seem like regular occurrences for those working in retail, but the soundtrack really helps emphasize that these are no regular customers. They are Black Friday shoppers, who also happen to have been infected with something from outer space.

When the monsters start to take over the customers and employees, converting them into evil, hungry creatures, is when the real action begins. The group of employees who are left form a plan to try to survive this horrific day. The film takes the idea of consumers in a capitalistic society and changes them into literal monsters who are consuming other humans.

The final few employees who have survived till this point are slowly picked off, one by one. The real hero and perhaps the most brave in the group is Archie (Michael Jai White), a male version of Lara Croft. Archie, without thinking of his own safety, saves Chris (Ryan Lee) from certain death at the hands of vile creatures. Seeing a selfless character like this is really what makes this film bearable to watch.

Director Casey Tebo’s film, despite being low-budget, has a few qualities that really work. The acting is on point for a film of this caliber, and some of the writing when it comes to insults really works. However, the film relies too heavily on the special effects, heavy makeup, and transformation scenes to make it seem more horrifying than it really is. Perhaps a method that might work better is utilizing more story and suspense and fewer jump scares to bring audiences closer to fear.

When it comes to acting, a seasoned veteran like Bruce Campbell is sure to make any film stand out. It’s not too much of a stretch to say that Campbell is really the best part of this movie, but even that is not saying much. It was kind of a disappointment that this B-rated film didn’t allow him to play what most audiences have come to love about him: his caricature of a man failing upward. In Black Friday, Campbell plays Jonathan, a bossy corporate puppet with little regard for his employees — or, in less colorful words — just a boss in corporate America. The actor Campbell is phenomenal and is remembered for many of his roles in the Evil Dead series and his role in Burn Notice as Sam Axe. He brings this momentum and vigor to his role in Black Friday but falls just shy of the level of charisma he usually brings to his other films.

While the film is nothing extraordinary, it does have its moments of clarity that function well. The issues lie mostly with a lack of character development and storyline. The acting from the characters helps bring out the comedy, and the action scenes do give hints of horror, but beyond that, it feels more like a cheesy film. Still, for those who are faint of heart, this might be the blend needed for a night in.

Black Friday is currently playing in theaters and on demand.