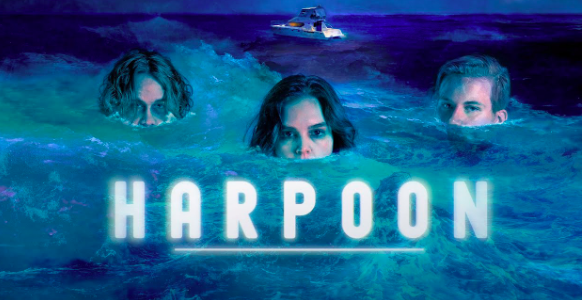 Harpoon has arrived just in time for the Halloween season.

The director of this plot-twisting film is Rob Grant. The writers include Rob Grant and Mike Kovac, who are both credited with the production of this dark comedy. This film was captured in a very confining space, illustrating the capabilities of their brilliant minds. This dark comedy about three sort-of good friends fuses together superstition, secrets, and sex to create a thriller that stimulates while it entertains.

If you do not think it is possible to tell an entertaining and creative narrative with three characters, a boat, and an ocean setting, well, Harpoon is here to rectify that idea. A group of buddies find themselves in the middle of a fight. Once their bickering is assuaged, they begin to make up and become friends again. The richest among them (Richard) decides to take his other two friends out on a boating trip to apologize and make amends. He takes them on his expensive yacht. This is where the beginning and the end of the narrative combine, on one small ship.

These characters are surprisingly believable in their violent actions that also somehow turn out to be comedic. The trio of comrades are: Jonah (Munro Chambers), a down on his luck and seemingly quiet guy, whose insecurities and lackluster personality leaves a lot to be desired; Sasha (Emily Tyra), a redheaded nurse who has hitched her wagon to her rich lover; and Richard (Christopher Gray), a spoiled rich white boy with anger issues and a hot body to match. His playboy attitude is obviously an issue, as understood by his boat name the pleasure vessel, Naughty Buoy. Each of these friends shows their true colors when push comes to shove. At times these wishy-washy friends almost become too mean for their roles. But that is what keeps the audiences entertained.

The hottie with the body Richard lavishes his friends with gifts after he rearranges his best friend’s face for the notion that his pals were carrying-on without him. His associates Sasha and Jonah were texting about a gift they were considering buying him and ultimately do. This gift is the harpoon gun, aka a spear gun. This dynamic duo reveals this to Richard after their fight, and as an apology, he takes them on a day trip. What better use of the new toy than to go out and use it?

The saying goes, “If a gun is shown in the beginning of Act One, it must go off by Act Three.” This film reinforces that saying, but the difference is that this gun is a harpoon. The title cleverly depicts the actions that each character takes: fast, unneeded, and harmful if used. Each character holds a secret that they keep and when revealed it is devastating to the other characters. Their words are weaponized for more continuity and destruction. The film draws out and teases the idea of infidelity. The culprits of these actions are not always so clear. The teasing of sexuality as a form of enjoyment and the effects are skillfully used to cause harm to their partners. No one is safe from these caustic remarks.

The entire film is almost exclusively shot on the beautiful, cool Atlantic Ocean. The film ignites the harsh sun’s rays by revealing the characters in a bright red sunburn. The bright days are gorgeous, and the feeling of being lost at sea becomes a reality for not just the characters, but the audience. The scene is enhanced with the stories they tell each other about being out at sea, the seagulls, and the abundance of saltwater that no one should drink.

The overlapping narrator is one that adds to the collective experience. While the narrator is none of the three characters on the boat, his addition allows the film to have a more artistic tone to it. The voice-over is Brett Gelman. The narrator quotes the famous Aristotle on the concept of friendship. He then proceeds to add a fourth concept that lends itself to this film’s interpretation. The narrator also adds superstitions that unfold in a funny yet also not so haha moment in the end.

Harpoon has good comedic timing, unexpected twists, and even a few sucker punches to the audience and the characters. The choice of narrator adds to the film, along with the ideas of superstition, and secrets. The choice to limit the locations, characters, and possible solutions are what galvanizes this film to the score of 3.5 out of 5. This film is just in time for those that want to be on a rollercoaster that scares you, but it might also leave you feeling just a little gun shy.