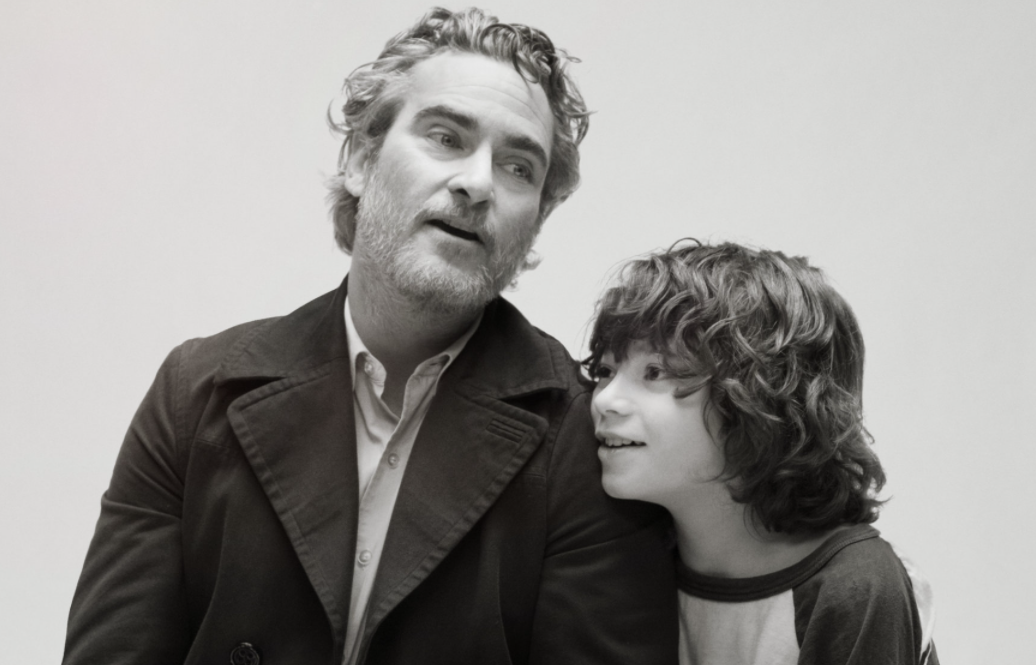 The vision of writer-director Mike Mills, C’mon C’mon is a gorgeous, simple film that is bolstered by the complexity of an emotional script and authentic acting. The film stars Joaquin Phoenix and Woody Norman along with Gaby Hoffman. There are a few supporting characters, but these three provide the framework for a film that is much more than it seems.

We open with Johnny (Phoenix) as he’s recording one-on-one with children in various cities around the country. He’s asking them about their thoughts on the world and their place in it. It’s very candid and mostly unscripted. It’s interesting how kids often have ideas but sometimes lack the confidence or words to express themselves effectively. And it’s beautiful the way that ties into the feature film.

Johnny is in Detroit piecing together his documentary/podcast when he receives a call from his estranged sister, Viv (Hoffman). Viv has a son Jesse (Norman) and an ex-husband who suffers from schizophrenia and bipolar disorder. The couple is separated, but Viv is helping her ex move into his new place when he stops taking his medicine and begins to spiral. She asks Johnny — whom she hasn’t spoken to in over a year — to come and watch Jesse while she deals with his father.

We learn that a year prior, Viv and Johnny’s mother died after a long battle with cancer. The death affected both of them in different ways and both reacted severely to the loss, causing a division between the siblings. Time can distract from most wounds, so when Viv asks, Johnny agrees.

From this moment, C’mon C’mon becomes a multilayered ode to the way kids and adults relate to each other in surprising ways. Johnny is unmarried with no children and hasn’t really bonded with his nephew. Some of the ways the little boy acts out confuse and baffle Johnny. In particular, there is a game that Jesse created called Little Orphan, in which Jesse pretends to be a dead orphan and asks questions about his life. Johnny is understandably reluctant to play but slowly understands that it’s one of the myriad of ways Jesse has concocted to cope with the things in his life he can’t understand.

Jesse is angry, upset, and confused, but also happy and energetic and open to the big wide world. Norman does a fascinating job of carrying these juxtaposed emotions in a way that is not pretentious and overly sappy. He’s a kid through and through, and the authenticity of his performance is breathtaking.

Shot in black and white, the film reveals something about the starkness of an environment where life exists in the shades of gray. Jesse’s eyes sparkle with wonder and Johnny’s glisten with equal parts sadness and hope when it comes to his nephew — a little boy who quickly gloms his way into Johnny’s heart.

It’s interesting to think of a black and white film being so beautiful and visually arresting. The inner city doesn’t come off as cold but rather vintage and lived in. I found while watching that my mind filled in the colors on certain scenes when I let the words paint the pictures. There’s very little music, but the diegetic sounds of the film are nearly music on their own: the hum of the inner city, the whooshing of the waves as Jesse points Johnny’s boom mic towards it. Several times we hear only what Jesse hears through the headphones, and it creates an intimate experience.

The growing bond between Johnny and Jesse helps to strengthen the bond between Johnny and Viv. He calls her constantly, either to speak with Jesse or to ask questions about how to best take care of him. Her admissions of never knowing what she’s doing and just following her heart and seeing what works are touching and real. Viv has her own thing going on mostly in the background, but her maternal energy is evident in the way she cares for her husband and the way she instructs Jesse to be his own man.

Making the main character an uncle served the purpose of this single man who’d never been a father instantly becoming a father figure. There’s something almost cocky in Johnny’s decision. Jesse is just a kid, how hard could it be? Johnny’s nerves are tested when Jesse wanders away from him while in New York City, and Johnny realizes he’s never felt so weak in his entire life — and never so strong as when he protects Jesse and keeps him safe.

Along with a stunning narrative, C’mon C’mon features several interviews with kids across the country. They could be their own film with how insightful and authentic they are. Johnny asks real questions, like: “What will nature be like in the future?” “Will families and cities change?” “What are you scared of?” “What makes you confident?” The kids who answer do so with so much introspection and vulnerability that it makes you think yes, the kids will be all right.

The documentary moments did not only serve Johnny and Jesse’s story — they stand on their own. These kids are so precious and apparently had a strong impact on Mills and the production. One kid they interviewed in New Orleans, 9-year old Devante Bryant, was later tragically killed by a stray bullet while sitting on a street corner. Mills dedicated the film to him, showing the importance of acknowledging his impact.

Films with kids can be tough because they can come off as overly pretentious or overly sappy, but C’mon C’mon strikes just the right balance that doesn’t dumb down the concepts but makes the themes accessible and relatable.

On its 25th Birthday, ‘Now and Then’ Resonates Differently as an Adult