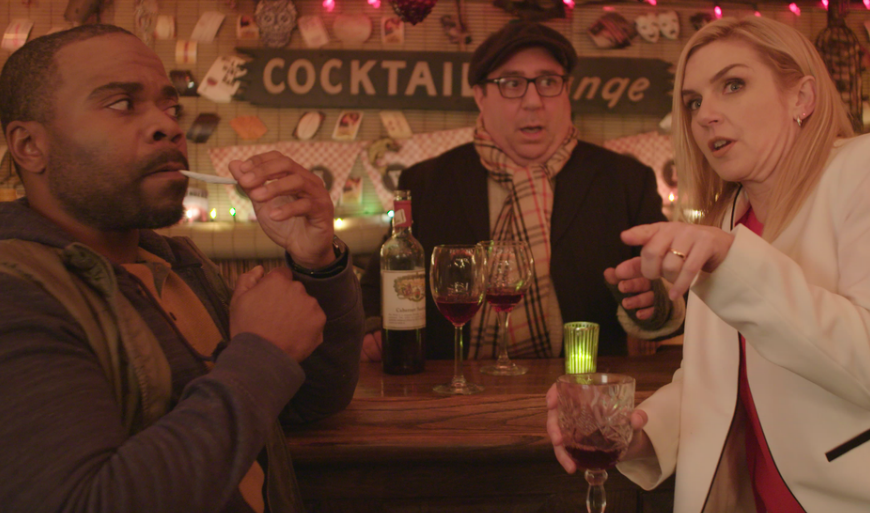 In the wake of the global pandemic, Cooper’s Bar Episode 1, “The Pitch” (on Vimeo) is here to assuage some anxieties.

Since many of us are finding out that we are now, even more so, stuck inside watching a few re-runs of our favorite shows, here comes a comedy that won’t take up but seven minutes of your time. For audiences who require a quick understanding of this episode pilot, I am here to help.

Let us talk about the director.

Cooper’s Bar is a seven-minute comedy that will have you wanting more episodes. This is because of the vision of its director, Alfredo De Villa, from Mexico and probably best known for his works like Washington Heights (2002) and Adrift in Manhattan. With his keen eye, he has managed to produce a work that is short but has real potential — it just has to be longer than seven minutes.

Who are the casts and writers?

The very talented individuals who helped create this project in front and behind the cameras have produced an alluring pilot. Screenwriters Nick Morton, and David Conolly do a bang-up job of creating dialogue that reflects each character’s individual personalities.

Let us begin with the lead character Cooper Marino, played by Louis Mustillo. Marino is a character actor between jobs, otherwise known as unemployed. He wants to leave LA for New York to become a real bartender. Before that, his friend attempts to convince him to pitch his backyard bar to an executive as a TV show.  He is accompanied by his equally humorous wife. Kila Kitu plays Mary Marino, who holds a PhD. She is fondly referred to as his “meal ticket.” This comical couple with their brief moments on screen together have real chemistry.

Brandon Washington (Casey Washington) is Cooper’s friend. Brandon is a screenwriter currently working as a postal worker. His current project includes words like Christian, babies, and zombies. He also doesn’t skip a beat when it comes time to drink and chill at Cooper’s bar. Cooper’s connected friend and who will help him land his show is David Butler (David Conolly). Butler is a director whose current resume has him as an Uber driver. His scheme is to lure a TV executive into the bar and pitch the show.

Rhea Seehorn stars as Kris Latimer, a big shot TV executive. She is lured into the bar by Butler who falsely claimed that Amy Schumer would be meeting them. This is just the start of their misadventure. Latimer’s personality is one who possesses a great sense of unearned grandeur. This makes her appearance so spectacular. As she visits Cooper’s bar, she almost instinctually comments on the plethora of objects. Her comment is wonderful, and I hope there are more to come.

Is there a twist and if so where?

If there is one thing you should take way from this pilot, it’s the conclusion. The build up to the twist is small, but it works. When you finally see the look on the character’s face as they walk back to their once pristine car, you just know the rest of the season is going to get even better!

What is the setting of this show?

The great thing about this episode pilot is that it only has one location, thus far. It is the Cooper’s backyard. The overly decorated bar does not luxuriate in its opulence — opulence in the loosest terms possible. It instead draws attention to itself by way of how messy it appears. The concept of pitching at a bar has its benefits: it’s often dark in bars, and it can provide decent conversation. This, however, is not what happens. This is exaggerated by the lighting that is used. In one scene it is clearly nighttime, but once at the bar, it appears to be as bright as day. The lighting plays a terrific role in switching the mood and attention to what is most important in the scenes.

What are some redeeming qualities these characters have?

It’s too early to tell if there are any redeeming qualities about these characters, but this is what can be gleaned from the pilot. It has a few characters who all appear to be a little unlikeable. This is partly due to their vulgar language and their insistence on insulting their friends. Yet, it is the fact that these characters might get a chance to create their idea. That possibility is what that makes this show worth watching.

This first episode features a lot of what you would expect from a comedy: misfortune, a few one-liners, and good comedic timing for both. It is clear that their adventures will not end at the pilot, but where it will take them is another story entirely. This attractively packaged storyline inculcated with alcohol, trash, and bad insults are all used to create the world for these characters. The director’s idea as to where this visual experience will take audiences is worth sticking around to see. This viewer can’t wait to see where they end up next.

SXSW 2020 Review: ‘Homecoming: The Journey of Cardboard’: A Cardboard’s Purpose