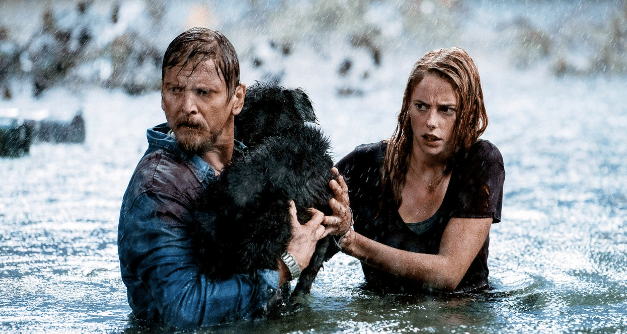 For Floridians, Alejandre Aja’s creature feature and survival horror Crawl is looking to be the sleeper comedy hit of this summer.

Comedy. Yes. You read that correctly. From a hurricane that comes out of nowhere (unlike earthquakes, hurricanes take 7–10 days to actually land) to a house with a basement crawlspace on a Florida lake (Florida homes can’t have basements due to the high sand table as well as flood risk), Crawl is one big factual inaccuracy about Florida, hurricanes, and even alligators.

Haley (Kaya Scodelario) is a student at the University of Florida–Gainesville on a swimming scholarship, the only detail about Florida that Crawl gets right. One day after swimming practice, she suddenly finds out that Category 5 Hurricane Wendy is bearing down on the area and an evacuation order is in place. This by itself is weird because hurricanes are named alphabetically at the start of the year. W means there would have been a whopping 23 hurricanes already that season. There would have been no surprise hurricane at that point, and the real horror story would have been remaining Floridians fighting for limited water and food resources. 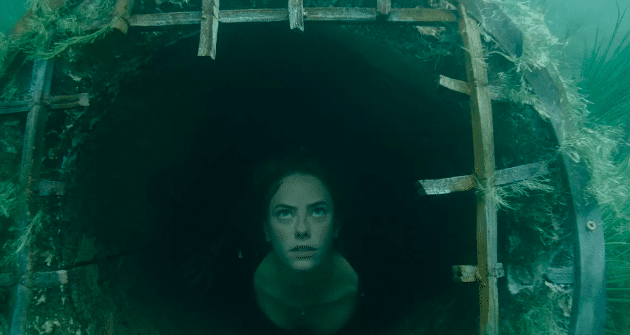 After a panicked FaceTime with her sister Beth (Morfydd Clark), Haley finds out her dad Dave (Barry Pepper) is missing. Haley drives into the hurricane to try and find him, ending up at their old house on a lake where her dad is injured in the basement and beset by a huge family of gators. Haley is soon under attack as well, as the crawlspace slowly begins flooding.

I’m just going to dive right into everything wrong here, pun intended. Hurricane winds at Cat-5 are roughly 156 miles per hour, and would literally blow a car off the road. You simply can’t drive in those conditions. Period.

When Haley reaches her old house, not only does the improbable-unless-you’re-a-millionaire 3-story home not have an air conditioner (without AC a house in Florida would be rotted with black mold in a week) but it is wholly made of wood (Florida homes are strictly concrete to address the high humidity) and several windows are open. Anyone who has spent five minutes in Florida knows that during hurricane season, aka summertime, you cannot have a window open even briefly without putting your home at risk for humidity damage. There are basically two weeks in February in Florida when you can have open windows. That’s it. 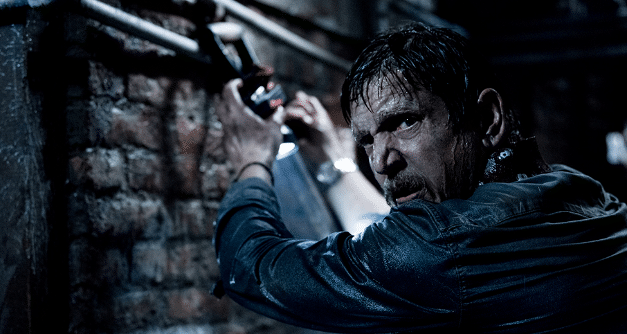 Haley’s childhood home also does not have hurricane windows, evident when a tree comes through one and also when Haley is forced to break the sliding glass door to get back into the house. But in spite of not having hurricane-proof glass, the inside of the house is quiet as a churchmouse. Anyone who has survived a hurricane without hurricane glass — like myself — has heard the deafening rain and wind that had my ears ringing for almost a week after the storm passed. Years later I am still haunted by the all-too-human sounds of Hurricane Irma as its Category 4 portion whipped around my home sounding like a horde of ghost children screaming or an army of growling zombies trying to get in. There is none of this in Crawl.

And now we need to talk about that damned basement in Crawl, the one upon which the name of the film and the entire narrative structure is based: There. Are. No. Basements. In. Florida. This state is built on a sand table, so homes are first built with a concrete slab foundation that is engineered to withstand shifting sand and underlying water. The only homes here other than Hemingway House in Key West and Hallstrom House in Vero Beach (which used expensive techniques to create the now-walled up basement features) that have a crawlspace like the one in Crawl would be a stationary mobile home. But even mobile home crawlspaces are generally filled in because of the risk of animals setting up shop under your house and, of course, flooding. Florida mansions might be three or more stories, but that basement level is an optical illusion since it is still built on that foundational concrete slab without which there could be no homes in Florida at all.

Further, the basement in Crawl is not only improbable in and of itself, but to make it even worse the walls are full of design cutouts leaving the space open to the elements. The home is also on a lakefront. The threat of flooding alone during a normal rainstorm would make that property absolutely uninsurable, let alone unsellable until that basement was filled in. Worse — because there is no end to the bad in Crawl — all of the electrical wiring for the house is in the basement. Wiring. In a basement. On a lake. In Florida. Prone to regular flooding. Sweet Baby Jesus, that house would never have been lived in at all, let alone be allowed to put up for sale as Haley’s dad had done without significant renovations.

The film continues going so far downhill that the local audience with whom I saw this film were openly laughing at gaffe after gaffe. During a hurricane you can’t see your hand in front of you, but somehow Haley was able to get the attention of looters on the other side of the street. The crawlspace was open to the deafening noise of the hurricane — a sound so intense you have to scream so the person next to you can hear — yet Haley and Dave talked at normal levels and magically could hear each other. Rescue crews do not go out into a Category 5 hurricane until the winds and rain die down. But in Crawl they do. There’s no hurricane glass in the house, but their sliding glass shower door is magically strong enough to hold off an adult alligator.

Crawl couldn’t even manage to get ‘gator behavior correct. Haley is bitten by a 15-foot adult alligator three times, dragged and spun by her shoulder, forearm, and leg underwater. And yet she popped up each time with just a scratch to show for each incident. A ‘gator that size would have easily bitten off her arm and leg without even needing to spin her. After the credits began to roll people were still laughing and shaking their heads as they left the theater. 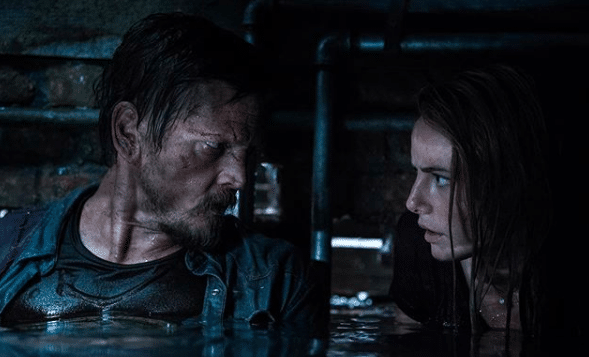 Crawl‘s writers and filmmakers have clearly never set foot in Florida or asked someone from here to consult on this mess of a film. The saddest thing to me about Crawl as a Floridian transplant and hurricane survivor is that a hurricane is terrifying on its own. In a moment, you could lose absolutely everything, including your life. The experience of surviving one has scarred me to the point where even now I have a hard time talking about it. And yes, dangerous animals like pythons and alligators do in fact find sanctuary in people’s homes during and in the aftermath, wreaking new havoc. But Crawl didn’t bother with the real-life horror of any of these actual Florida stories and instead created a scenario that makes entirely no sense. This film needs to be labeled horror fantasy along with creature feature and survival horror. Even the manufactured father-daughter family drama between Haley and Dave was superficial at best, and absurd at worst, considering the entire premise of Crawl is ridiculous.

Crawl had such amazing potential that was 100% wasted due to a total lack of background research. It’s wild that a big-budget summer movie would get so much profoundly wrong about Florida, hurricanes, and even alligators. This could have been such a fantastic film that would have scared Florida audiences and outsiders alike. Such a missed opportunity.

All that said, Crawl will likely be an entertaining romp for non-Floridians who won’t see these glaring errors. For us in Florida, though, we will be laughing at the film, not with it. And to anyone else considering making a Florida narrative, get a consultant so you don’t embarrass yourselves like Crawl. Making it really easy for you: I’m right here.

The Painful Truth About How Hurricanes Affect Black Communities