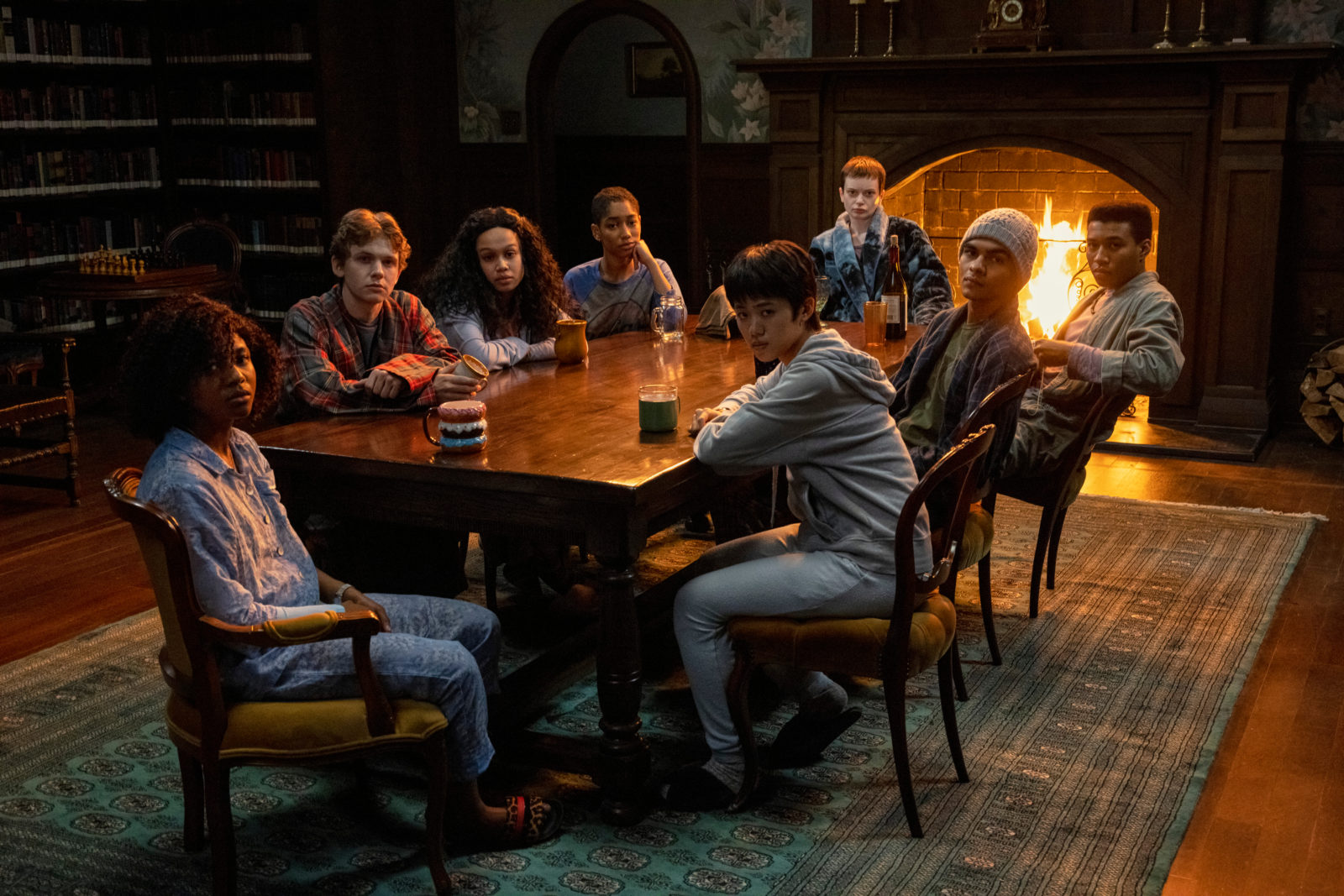 Yes, it’s that magical time of year when we get another entry into the Mike Flanagan Cinematic Universe.

This month the Flanaverse expands with the writer-director’s Netflix series, The Midnight Club, adapted from the 1994 YA novel of the same name by prolific author Christopher Pike, who also serves as executive producer. Co-created by writer-producer Leah Fong (The Haunting of Bly Manor), the series follows a diverse group of terminally ill teenagers and their nightly meet-ups to scare each other with thrilling tales of ghosts, witches, and serial killers. But how do you scare someone whose reality is already terrifying?

Set in 1994, we begin the series with Ilonka (Iman Benson), an ambitious and intelligent high school senior and future student of Stanford University. A thyroid cancer diagnosis gets in the way of her ivy league dreams, forcing her to change course. But as a generally optimistic young woman with a penchant for planning, she does her own research and finds Brightcliffe, a place where young people have more agency over how they spend the rest of their time. Decades ago, one cancer patient was miraculously cured on hospice grounds, and Ilonka hopes the same can happen to her.

Ilonka meets her new family away from family and fellow terminally ill teens — Kevin (Igby Rigney), Anya (Ruth Codd), Spencer (William Chris Sumpter), Natsuki (Aya Furukawa), Sandra (Annarah Cymone), Amesh (Sauriyan Sapkota), and Cheri (Adia). On her first night, Ilonka finds them in the hospice’s gorgeous and well-stocked library. This is where the titular Midnight Club gathers and tells stories, or as Natsuki commands, “Make ghosts.” Each story is personal to the storyteller, stories that reflect their own anxieties, adding in supernatural elements to heighten each tale. Executive producer Trevor Macy tells Netflix, “We’re all just stories in the end. When you live on in the heart of someone else, you live on. And that’s something that’s really resonant for these kids.”

Similar to how Bly Manor incorporated other stories by Henry James, The Midnight Club also includes other Pike works like The Wicked Heart, Road to Nowhere, and Witch. With all the stories within the main story, the series can go into different genres from black-and-white noir mysteries to science fiction thrillers with cyborgs. These mini movie-like sequences are crafted by a slew of talented directors with backgrounds in the YA and horror genres, including Michael Fimognari (To All the Boys: Always and Forever), Emmanuel Osei-Kuffour (Black Box), Axelle Carolyn (American Horror Story), Viet Nguyen (Chilling Adventures of Sabrina), and Morgan Beggs (Once Upon a Time).

But there’s more to the club than exchanging stories. The members have a pact that if/when one of them dies, that person will make contact from the other side. Flanagan tells Vanity Fair, “The engine of the first season for us is these kids really want some kind of reassurance that their lives aren’t really over.” (There will be more than one season!) Along with reconciling with their mortality, the group goes through typical teenage issues. Being young is confusing and painful enough without imminent death looming over you, but they have to juggle it all.

As with his previous projects, Flanagan expertly balances humor with tragedy and scares. Bly Manor’s Dani Clayton (Victoria Pedretti) is one of the funniest, most relatable (and adorable), heartbreaking characters he’s created so far. And this new group of rich, unique characters has similar qualities. Given the heavy subject matter, the story is naturally bleak, but there are still moments of levity. A sense of humor helps when facing certain death, especially of the dark and morbid variety.

The beautiful Vancouver setting has a similar feel to it as Midnight Mass. Brightcliffe is surrounded by lovely greenery and crashing waves. Its interior is perfectly eerie, with its dim lighting and detailed set design. And let’s talk about the music. As soon as I heard the ominous version of “Possum Kingdom” by Toadies in the trailer I knew this series would have an excellent ’90s soundtrack. The Newton Brothers (Midnight Mass) use ’90s grunge classics to set the overall tone for a series about dying teenagers who have reasonably intense emotions that go beyond regular angst, with each teen’s stories having their own atmospheric sounds.

Each character’s personal journeys are handled with such care by the creators and actors, not just for cancer patients but for queer, disabled, and BIPOC. The majority of the cast is made up of exciting young talent. Some we’ve seen before, like Annarah Cymone and Igby Rigney from Midnight Mass, but for many, this is their debut. The brilliance of The Midnight Club is owed to the diversity in front of and behind the camera. Adult me loves seeing so many Black and Brown faces leading a horror series, but young me would’ve been over the moon. Representation matters.

Hopefully, this time next year, I’ll be gushing about his next project, The Fall of the House of Usher!

All 10 episodes of The Midnight Club are currently streaming on Netflix.