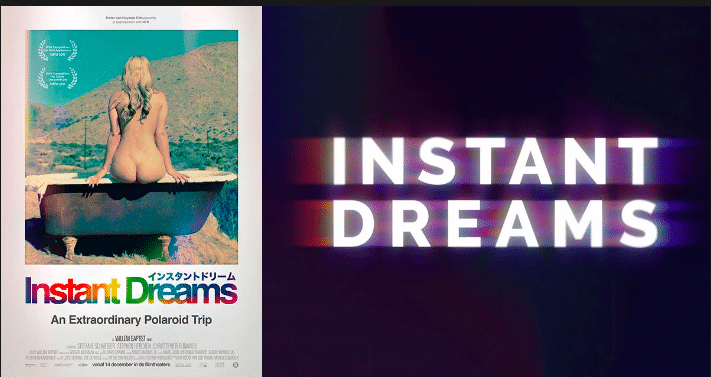 At some point in your life, you’ve may have owned or used a Polaroid camera.

With the push of a button and a flick of a wrist — even though you risk blurring the image — within 60 seconds, the subject of your photography magically appears.

When Polaroid stopped manufacturing their instant film in 2008, it was the end of an era of analog instant happiness. However, years later, chemist Stephen Herchen, PhD, who is chief technology officer at Impossible Camera GmbH in Germany and the Netherlands, and a group of fellow scientists set a goal to reinvent the instant film formula.

Writer-director Willem Baptist (I’m Never Afraid!) called Instant Dreams his cinematic ode to that “longing for magic, mystery, and a celebration of the dreams of the future that are interwoven with this medium.” The film expounds on the need for human connection and social interaction. Polaroid photos create that connection. What do you do while waiting for a Polaroid to develop? If you took a picture of an individual, you’re likely to strike a conversation with that individual while you wait. After the photo develops, the conversation will probably continue.

Instant Dreams talks about Polaroid’s founder, Edwin Land. Edwin introduced the instant camera on February 21, 1947, at the meeting of the Optical Society of America in New York City. It is said in the film that Edwin came up with the concept for instant photography while vacationing with his family. While he took photos of his three-year-old daughter, she asked why she couldn’t see the pictures right away. Edwin then spent hours thinking of a way to answer her question: a camera and film that would produce pictures within seconds.

Instant Dreams is 91 minutes of a shared obsession between the individuals with Polaroid film. Christopher describes how his obsession began at 13 years old with the purchase of a Polaroid camera for three dollars. When Polaroid ceased production of the instant film, he compared it to the death of a friend. Christopher’s research for Instant: The Story of Polaroid was a long and lengthy process, which he thoroughly enjoyed. There are also scenes with Christopher and his young son, of whom he takes plenty of Polaroids.

Stefanie, who lives in California, uses expired Polaroid film for photoshoots in the desert. In one scene, she enters her trailer and opens a refrigerator loaded with packages of instant film. The last Polaroid film packs she purchased are dated from April 2009. Stephen, who worked for Polaroid from 1977 to 2005, came out of retirement to work with the Impossible Project to reinvent the Polaroid formula. Now, there’s a new family of instant film and cameras available for instant photo lovers.

At times, Instant Dreams plays out like something out of a science fiction film, complete with dramatic music as splashes of color appear at rapid speed. There are also narratives from Edwin that come from vintage footage of the Polaroid founder. In one prescient standout scene (from a 1970 short film produced by the Polaroid Corporation, The Long Walk, Edwin discusses the future of instant photography. He takes out a slim, black wallet that matches the size and length of an iPhone and simulates pushing a button on the upper right corner. 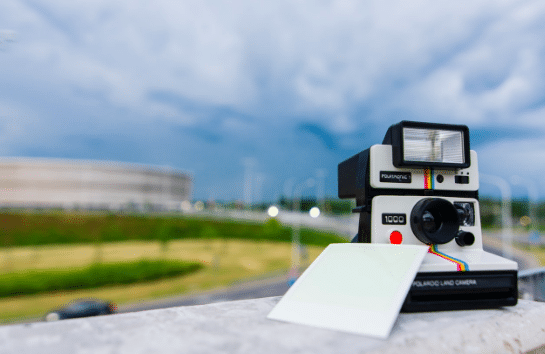 Stefanie uses her love of Polaroid film to capture models and nature. The California desert serves as the backdrop for most of her work. Stefanie’s work is also seen on the cover art for the Red Hot Chili Peppers’ single, “Desecration Smile” and Cyndi Lauper’s Bring Ya to the Brink album.

Stephen’s story is one of determination. His working to reinvent Polaroid’s instant film results in bi-continental life between Boston and Dusseldorf, Germany. You see him Facetime his wife daily while overseas. In Germany, he works with a group of scientists who share the same passion for instant photography.

A few moments in the film (scenes with rapid flashes of color and graphics) were unpleasant. They made me look away from the screen to prevent getting a headache. I also disliked the inherent limitations of a film to explore the full history of Polaroid and Edwin Land. If you want to go deeper, it is best that you do your own research with Google and YouTube.

All in all, Instant Dreams is a likable film that made me reminisce about my own possession of more than one Polaroid camera. I still have a lot of photos tucked away that will never be scanned for Facebook, Instagram, or Twitter pages. That’s the beauty of Polaroid from back in the day — when you use a Polaroid camera, the photos are yours to keep.

Instant Dreams is produced and directed by Willem Baptist. It is a Pieter Van Huystee Film in co-production with NTR.