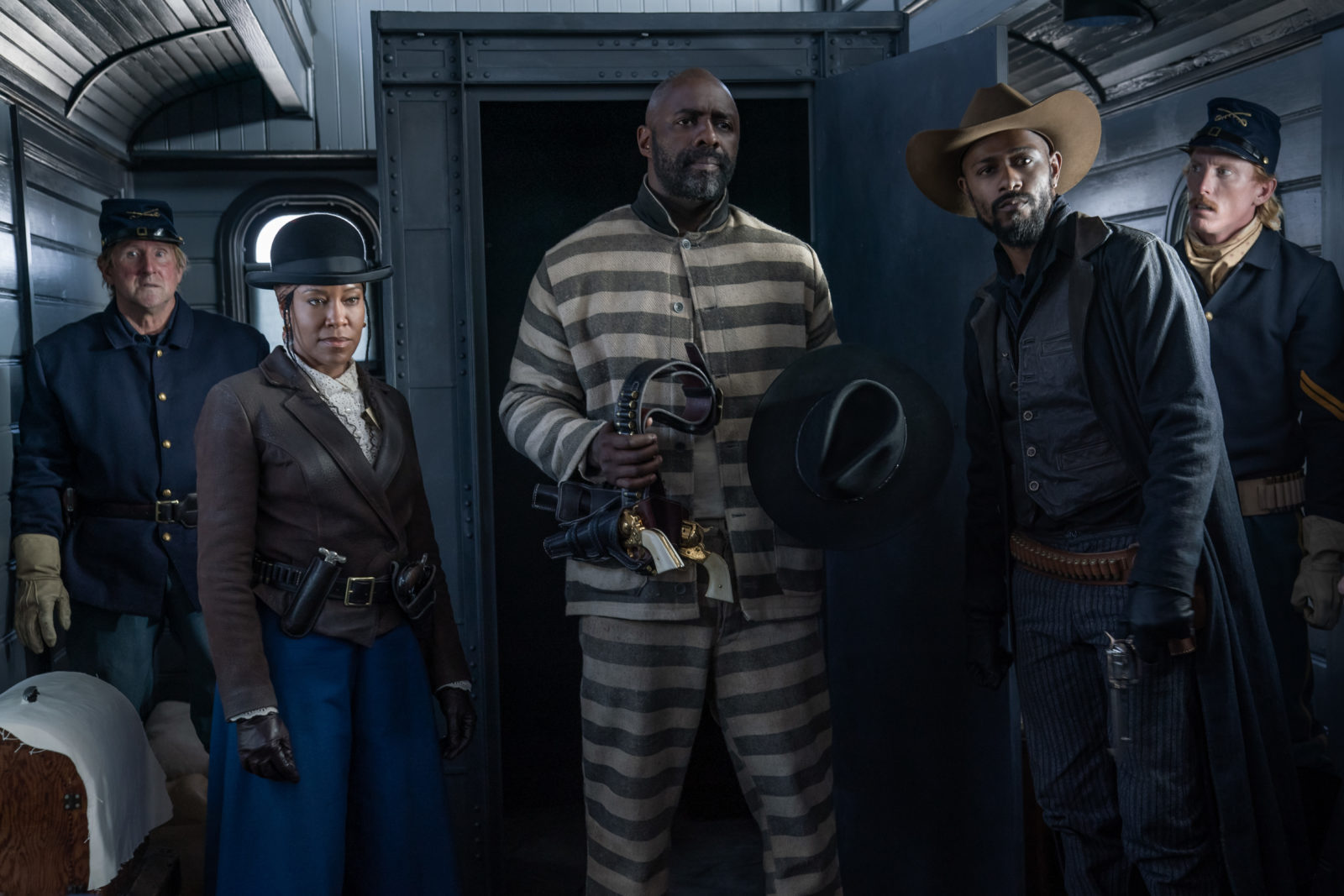 British filmmaker and singer-songwriter Jeymes Samuel (They Die by Dawn) makes his feature film debut with the stylish, high-octane Western we’ve been waiting for. Written and directed by Samuel, with co-writer Boaz Yakin (Now You See Me), The Harder They Fall uses the names of real-life Black Westerners, noting in its opening, “While the events of this story are fictional … These. People. Existed.”

The Harder They Fall follows Nat Love, a notorious outlaw known for killing other outlaws who shake people down for money. When he hears his lifelong enemy Rufus Buck is out of prison, he and his gang set out to get revenge. Rufus was sprung by his gang who held up the train transferring him between institutions. The rivalry between the Nat Love Gang and the Rufus Buck Gang goes back at least a decade, stemming from the murder of Nat’s parents, which he witnessed as a child. The film opens with this traumatic event, setting the ruthless, violent tone for the rest of the hero’s journey.

From the trailer, it might not be clear who the good guys and bad guys are, but it’s a Western, so everyone is a criminal in one way or another, including deputy marshals and mayors. Both gangs are made up of merciless killers, but the reasons behind their crimes differ slightly. Nat is all about revenge, though he protects those who have to deal with guys worse than him. Rufus and his gang are more about taking what they want.

Everyone is perfectly cast in their roles, playing to their strengths, and imbuing each criminal with humanity. Some characters are more sympathetic than others. Jonathan Majors has quickly proven himself to be an incredible, versatile actor. He continues to bring an emotional depth to his characters, both heroes and villains. Whether the two are flirting or fighting, the chemistry between Majors and Zazie Beetz (with her natural hair in all its glory) is undeniable and very enjoyable to watch.

The action scenes are thrilling even when the bullets run out. The violence isn’t over the top or for the sake of shock value. It’s essential to the story, depicting the brutal reality of the lives (and deaths) of outlaws. Director of photography Mihai Malaimare Jr. (Jojo Rabbit) captures the visceral scenes in sweeping and overhead camera shots, employing a few call backs to old Westerns and grindhouse films with split screens, title cards, quick closeups, and that semi-grainy look. There’s one particularly impressive long zoom shot that’s award-worthy in itself.

The Harder They Fall features an original soundtrack written and composed by Samuel, who also goes by the moniker “The Bullitts,” including a new song from Kid Cudi and co-producer Jay-Z. Most of the music is reggae and Afrobeat, which you wouldn’t expect in a Western, but it works. Samuel also mixes in a ‘70s cinematic Western score with some heavy beats, similar to the distinctive drumming Brian Reitzell used for Hannibal. The music makes this film that much more exceptional.

One of the most refreshing aspects to the film is that it’s about a rivalry between all Black characters. There are minor white characters in the film, and some are implied racists but not in a cartoonish way. And it’s not about vengeance on a Django Unchained level. Samuel told The New York Times, “It’s a film about a group of people, and, by default, these people are Black. But their skin color has nothing to do with the story. Which is what we’ve been waiting for, right?”

The Harder They Fall is a classic revenge tale with outlaws, lawmen, and shoot outs. But that doesn’t make it predictable at all. It’s always satisfying to see representation in historically white-dominated genres. As someone who usually doesn’t like Westerns, I highly recommend it. It’s a must watch. This is a film that is long overdue, and I can’t wait to see more of Jeymes Samuel’s groundbreaking work. The artist is a true visionary.

The Harder They Fall premiered at the BFI London Film Festival on October 6. The film will be released in limited theaters on October 22, prior to streaming on Netflix on November 3.