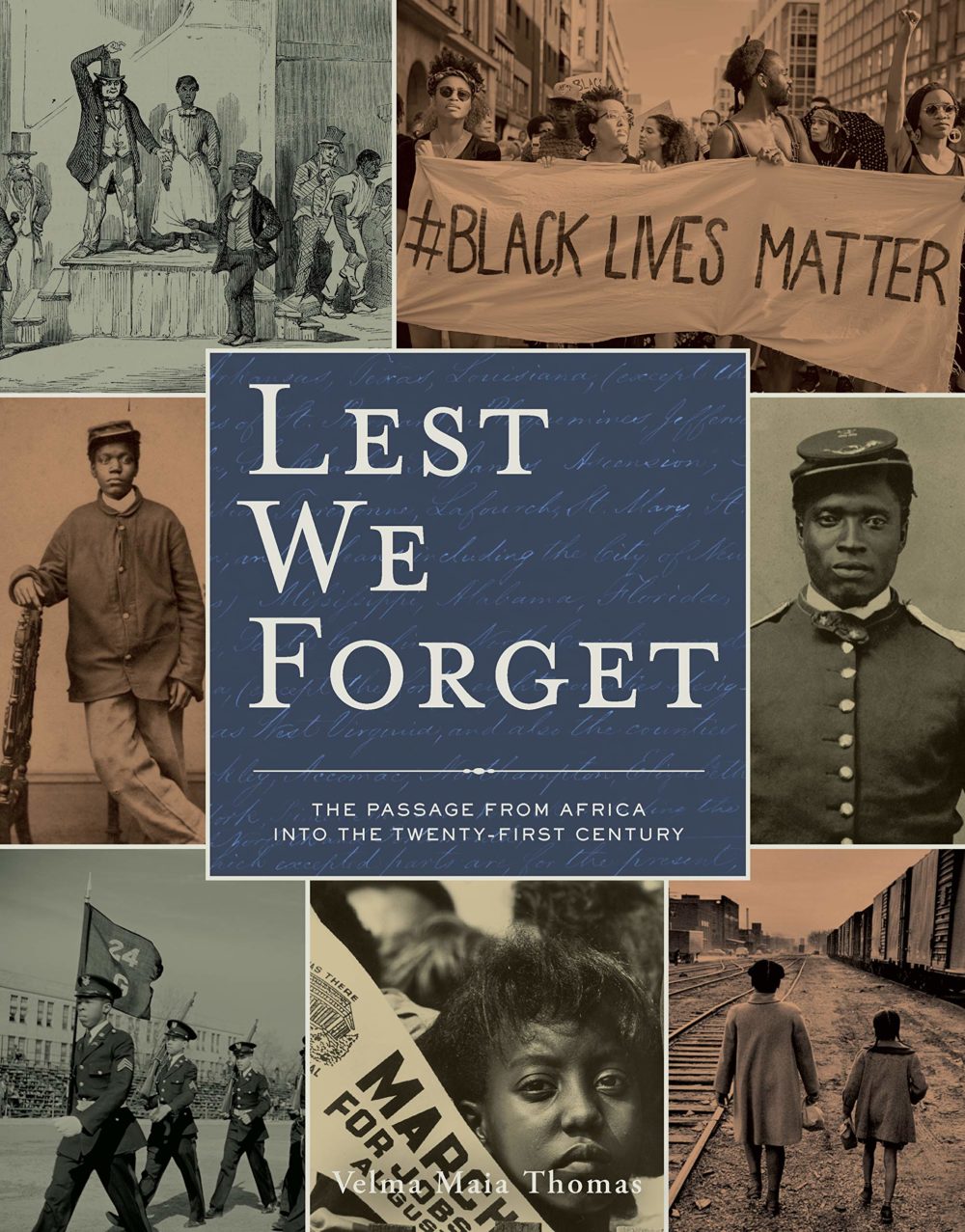 You can rescue the waning hours of your Black History month with a deep dive into a book that gets real about the topic. A book that tells what really went down in the way, way back in the time our ancestors were brought from the African continent to this land. Lest We Forget: The Passage from Africa into the Twenty-first Century is Velma Maia Thomas’s look at our history from the time we were brought until modern times. Thomas brings a fresh voice to stories we have all heard so many times, and in doing so, she sheds new light on a sometimes staid telling of black history. Her voice works to elevate the ancestors and acknowledge their roles in creating black culture as we know it. This focus brings us the narrative from a place of appreciation and affirmation — something the kids and families reading Lest We Forget really need.

This is, after all, a book that is perfect for a family, but it can also appeal to people of any age. Thomas tells stories with a simplicity that all ages can digest. she does not mince words on the atrocities and she never dwells on them longer than necessary. These events did shape our history, but they don’t define it. Thomas shows readers what does define black history with every chapter: perseverance, strength, ingenuity, determination, bravery, and faith. She focuses on how our ancestors pushed through all the hardships in order to win the freedom we have today. This is not a lighted-hearted and upbeat tale though. Don’t think that. It is black history and everybody knows the tale only has so much light brighten its often horrific stories.

Thomas demonstrates this when telling about the former slaves who proudly joined the Civil War and tried to fight for the Union army:

Instead of being trained for battle, black soldiers were relegated to menial tasks—building bridges, digging ditches, weighing and rationing food, and burying the dead.  They often were given spoiled food, inferior uniforms,  and old weapons, and they received less training in drill and military maneuvers. Black soldiers, even noncommissioned officers, received less than half the pay of white field soldiers.  It took two  Congressional acts, passed just months before the end of the war, to ensure that all black soldiers received the pay due them from the day of their enlistment. Despite the discrimination, men of the United States Colored Troops fought with pride.

As you can see, despite the cruelty and hardship, our ancestors needed to persevere and fight bravely to ensure that everyone saw freedom.

History You Can Feel

The experience of Lest We Forget is heightened by another element. In addition to Thomas’s style of storytelling, the book also contains tangible elements, some of which can be removed from the book for further scrutiny. I went through a copy of the hardback edition of Lest We Forget with my family. One piece that my five-year-old son notice was a letter from a WWII Lieutenant Sammie Rice, a nurse. It was written to her family in looping cursive script. The letter is one of the tangible elements.

My son pulled it out of the envelope on the page and opened it up. I read some of it and stopped because my son was holding an old picture of a woman. She was a black WWI nurse posing stiffly in a crisp uniform. He held it and stared while I read about black people in combat during WWII. Holding this history and reading about it at the same time mesmerized the child. It made the facts and words more real to me. For all readers, these pieces that pull out of the book will make the history even richer and more real than any simple telling of the events ever could.

Lest We Forget is ultimately an uplifting reminder that our story is intriguing, rich, and very real. The words, photos, and tangible elements all work to educate, entertain, and illuminate some parts of our history that are often overlooked, buried, or sugarcoated. The real story may be raw, but it’s ours. Thomas gives us a chance to fully experience all of it in, with her words as our guide.

Black History Celebrations Around the World