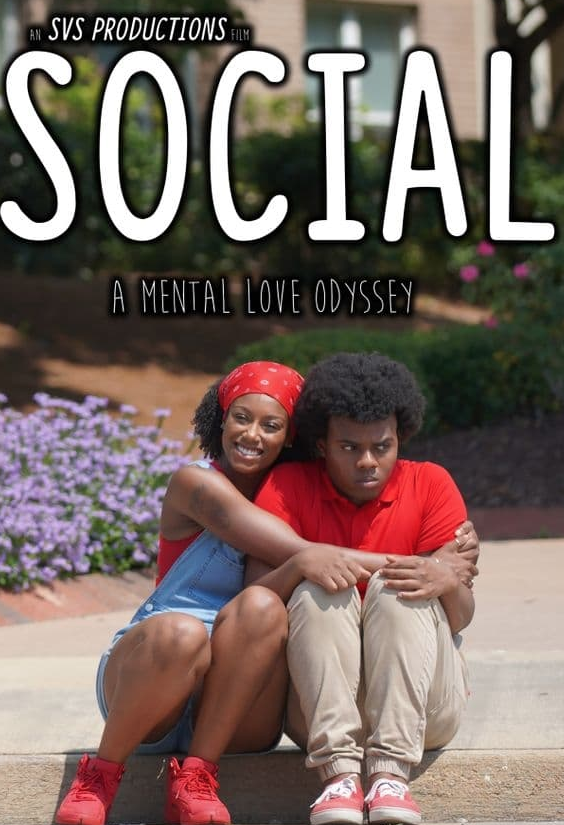 Social anxiety disorder is the persistent fear of being watched and judged. Someone with social anxiety has fear of speaking in public, meeting new people, dating, or having to talk to a waiter in a restaurant. Doing everyday things also may cause anxiety or fear due to concerns about being humiliated and rejected.

According to the National Institute of Mental Health, an estimated 7.1 percent of adults in the United States had social anxiety disorder in the past year.

In Miles Triplett’s film Social, we find Gary, who has been diagnosed with social anxiety disorder, lives a lonely life, and suffers from panic attacks. He meets Alexis, who has been diagnosed with ADD. Through a series of events, together they attempt to find the one person who Gary has never had anxiety around — his high school girlfriend Kayla.

What interested me about Social is that it centers Black people navigating through their mental health issues. It’s something we don’t see very often in film. For someone like me who battles anxiety, I was curious how the theme would be represented. Everyone in the film has a distinct issue, yet it all seems to work effectively. Underneath the comedy, there’s the difficult truth of mental illness. Using comedy helps to understand and connect with what the characters are going through.

Gary has recently moved to Atlanta and works from home. There is an attempt to make him seem pathetic, and it works. Then your mind returns to the fact that he’s battling a disorder, and now you’re able to gain insight to what he goes through. Gary has found a therapist to help him with his diagnosis. Dr. Dill, played by Triplett, keeps things a little too real. He’s so inappropriate and outrageous! That is not an understatement.

Surprisingly, the doctor manages to offer up a challenge for Gary — to start a conversation with the first person he sees. With that in mind, Gary comes across a crying woman on a park bench, Alexis. Initially, it doesn’t go well. As luck would have it, they meet up again later and a journey ensues.

Alexis conveniently having ADD may sound like a train wreck waiting to happen. It doesn’t help that she is extremely annoying at first. Alexis agrees to help Gary find Kayla, his ex-girlfriend from high school and the one person he feels completely himself with. The two begin a search that leads them to all sorts of characters, from Tracey, the bipolar fitness instructor, to Okuye, Kayla’s arrogant ex-boyfriend.

As the film progresses, we see that Alexis is everything Gary admires and wishes he could be. Gary provides something for Alexis that she’s never had before. They can identify with what each other is going through, instead of having to hide. I quickly grew to love each character, and root for them.

Clearly, it’s Dr. Dill that steals the show for me. At the end of the film, we learn something interesting about him, and I couldn’t stop laughing. Nonetheless, the importance of therapy was stressed, and I liked how that was centered over taking medication. As Gary says, “People are too quick to take medication and don’t really know what they’re putting in their bodies.”

The film is funny, but there were some moments that just didn’t make sense to me. For example, the initial emphasis on Gary not being attractive but women finding his awkwardness appealing. It was funny the first time, but it kept going. It was as if his weakness made him more attractive to these women with strong personalities. Another example is the coordinated dance routine with Alexis and Gary. It came out of nowhere and was corny. It didn’t fit into the film at all. I realized the point was to show their relationship had changed; however, it was an odd way of showing that.

Social becomes more serious at the end. Truths are revealed that made the characters more real, especially Alexis. My main takeaway is that oftentimes the thing we believe is best for us is what holds us back. At the end of the film, Alexis says something very powerful: “I feel confident, I feel protected, and I feel invincible.” Those are commanding words coming from a Black woman.

Triplett’s goal in the film is to shed light on social anxiety and ADD in the Black community. I believe the goal was achieved and am glad that he used a romantic comedy to explore that. The Black community has an increased rate of mental health concerns, and this film is a great effort to bring the issue to the forefront.

I enjoyed watching the film. The music was conducive in telling the story and the acting was great. You have to watch the ending to find out about the “therapist.” Well-played.

Social is available to watch on Tubi.