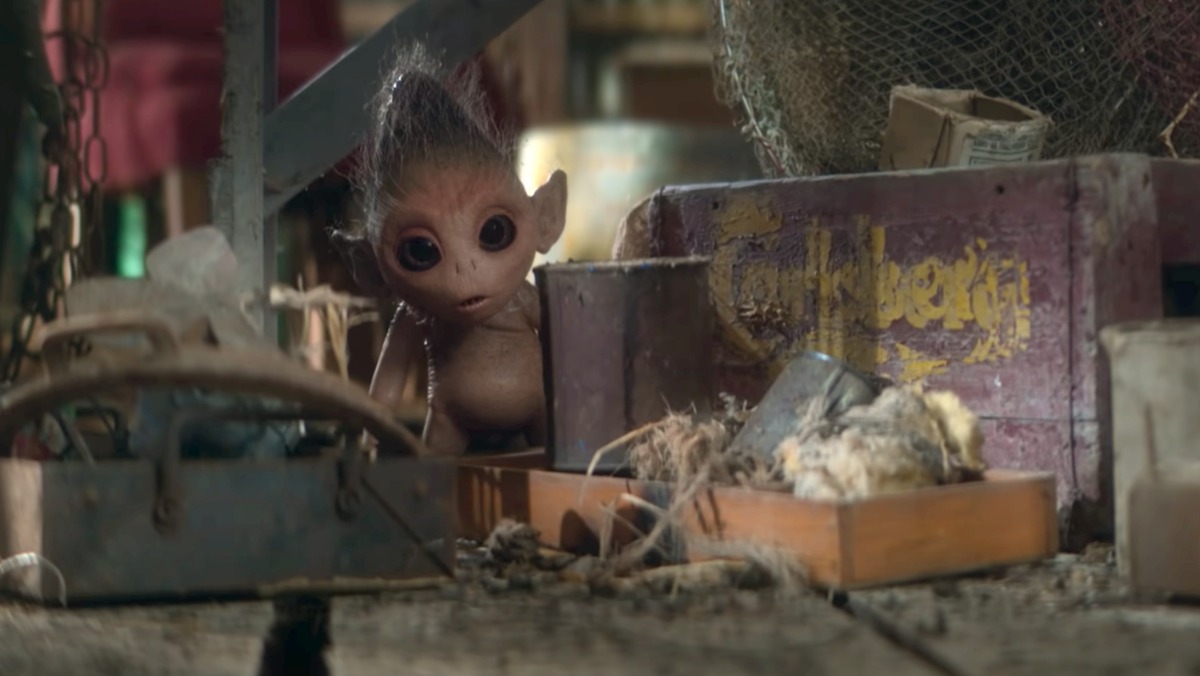 From Jannik Tai Mosholt and Christian Potalivo, creators of Netflix’s The Rain, comes an original Christmas horror series. Elves, written by Stefan Jaworski (Those Who Kill) and directed by Roni Ezra (Below the Surface), subverts the holly jolly archetype we’ve become accustomed to, and explores the nisse, a mythological creature from Nordic folklore and its connection to nature.

Set in Denmark, Elves (Nisser) follows a family as they travel to the remote island of Årmandsø for Christmas, a vacation meant to drown out the noise of their everyday lives. Charlotte and Mads hope to reconnect with their children Kasper and Josefine, even though it’s not the kids’ idea of a good time. On the way to their cabin, they hit something with their car. It leaves a black tarry residue on their bumper, but like all parents in horror movies/shows, they explain it away as “just a pothole.”

While they’re pulled over, Josefine starts walking towards a prison-like electric fence. A burly local, Møller, comes across their stopped car and immediately scolds them for being on this back road. Every islander they meet tells them to “take the coastal road.” But he also yells at Josefine. This is the first of many times they’ll be told to stay away from this mysterious fence.

Early on, it’s clear that Josefine is a very curious girl who can’t help but do the opposite of what she’s told. Her parents are an odd combination of overprotective and dismissive. They’re not as bad as the parents in Coraline — Charlotte and Mads genuinely care about their kids. They’re just so focused on having an ideal Christmas that what their kids actually want to do doesn’t matter. However, Josefine just has to wait for them to be distracted (which happens very easily), and then she goes wherever she wants.

She goes back to the area where they hit something and finds a wounded, screeching creature. It’s cute in a Grogu way, though its silhouette is closer to a Troll Doll. Josefine brings the tiny being back to an abandoned barn behind their cabin. What she’s doing is kind and caring, but she doesn’t realize there are fatal consequences.

Karen and her granddaughter Liv are nice enough to greet the family, but like everyone else, they couldn’t care less about these tourists. When Charlotte asks where to get a Christmas tree, Karen very curtly says that they respect nature on the island, meaning they don’t chop down trees. Naturally, the family doesn’t listen. You could say it’s a larger metaphor for humans ruining Earth.

Møller, Karen, and Liv are cold, frustrating characters. To be fair, they repeatedly tell this family the same two things: 1) only take the coastal road; 2) stay away from the fence. And the family manages to do the opposite (which explains Josefine’s own behavior). However, the family isn’t given an actual reason or any backstory as to what the fence is for and why they shouldn’t be around it until later.

I wasn’t sure whose side I was on, since both had valid points. The islanders know what these creatures are capable of and have maintained peace over the years. On the other hand, who wouldn’t help an injured baby animal, or in this case, a baby elf.

We’ve seen countless versions of the mythical creature, from Santa’s workshop elves to Middle Earth. The elves in this series are more like woodland creatures made out of bark. The sound they make is unsettling and very effective. When Kasper learns that these are creatures to be feared, he asks, “Those little guys?” And Liv says, “They grow bigger.” The size of the baby is nothing compared to the adults, and it’s hard to see how one becomes the other.

Setting the series at Christmastime is fitting, but not just because it’s about elves. It’s a time for family, for tradition, for rituals. This island has a way of doing things, albeit in a cult-ish, moderately violent way. And the island scenery is beautifully dreary. I had the same feeling when watching Midnight Mass. It’s almost too breathtaking and serene. You know something bad is going to happen.

Elves is an enchantingly dark modern fairy tale. Since it involves kids, mysteries, creatures, and woods, the series will be compared to Stranger Things, like everything is these days. The small cast and secluded island setting are more reminiscent of Dark (without time travel), especially when it comes to the eerie music. The opening credits include a haunting cover of “Carol of the Bells,” similar to NOS4A2. If you’re looking to add more Christmas-themed horror to your watchlist, I highly recommend this Danish gem.