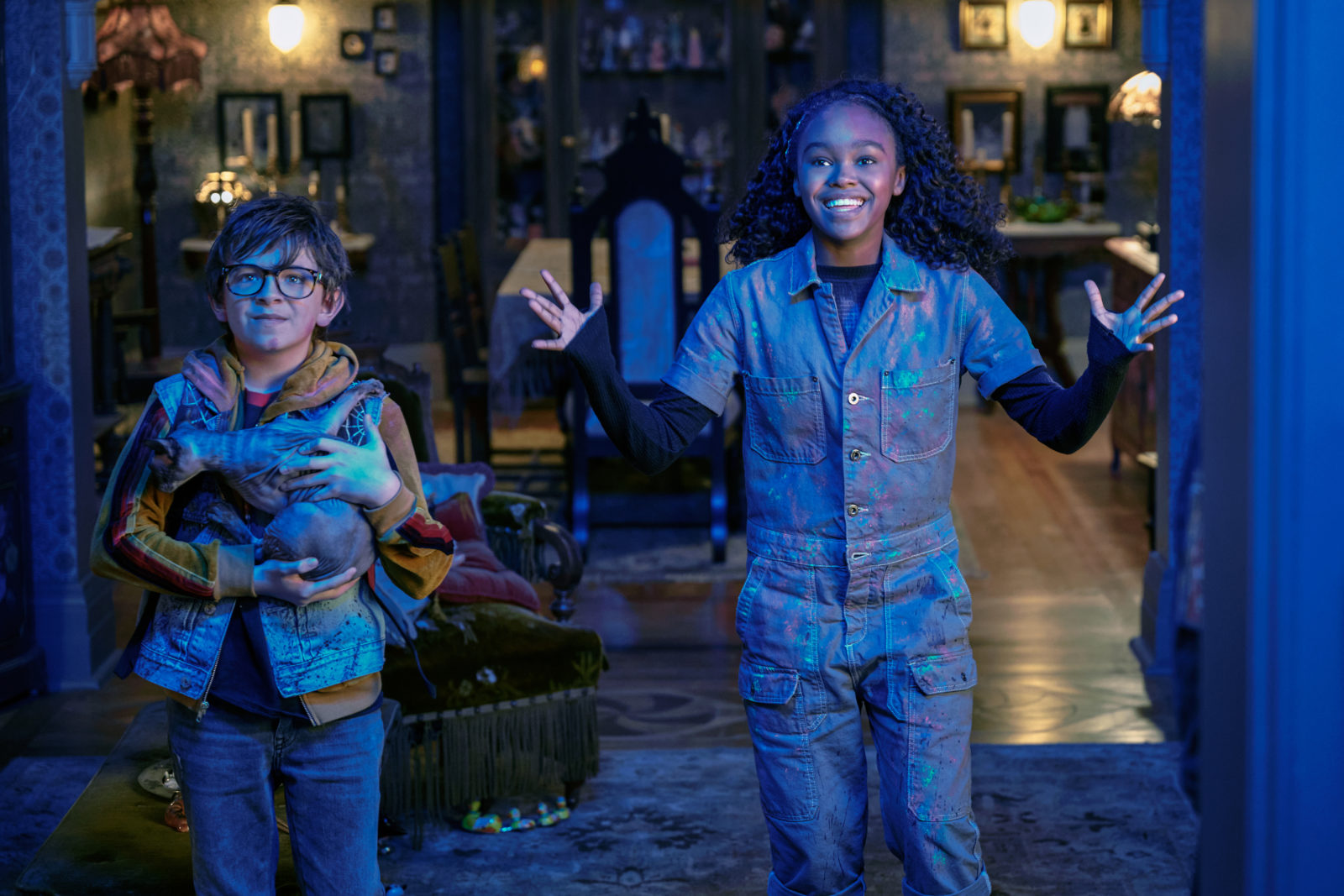 Netflix’s latest original film Nightbooks brings the scares and fun this Halloween season. It’s a dark fantasy horror flick based on the 2018 middle-grade book of the same name by J.A. White. In the hands of director David Yarovesky (Brightburn) and writers Mikki Daughtry and Tobias Iaconis (the duo behind The Curse of La Llorona), this story for kids evolves into a film that appeals to a young adult crowd. Littler kids and adults will enjoy it too.

Nightbooks follows young, aspiring horror writer Alex, a bespectacled kid in the midst of emotional distress preparing one night to run away from his Brooklyn home. The film throws us into the action right away, with no build up or explanation for Alex’s angst-filled introduction. The pacing can feel a bit off at first, but there’s a lot of story to cover in the 100-minute runtime.

After an unusual elevator ride in his apartment building, he finds himself trapped in a strange, creepy apartment. This magical apartment travels all over the world and lures kids inside with what they love and can’t resist. For Alex, it’s horror movies and pumpkin pie. When the witch appears, she threatens to kill him unless he can be useful to her. He tells her about his knack for writing scary stories. Intrigued, she lets him live, but he must read her a new scary story every night — with no happy endings.

Alex meets Yasmin, a slightly older kid captured by the witch. She appears headstrong, jaded, and nearly fearless, but deep down, she’s still just a scared kid who misses her parents. Her main job is to tend to the witch’s magical plants, but she’s tasked with other miscellaneous chores like cooking and cleaning. Alex and Yasmin are an unlikely pair, both nerdy in their own ways — Alex, a horror buff teased for his weirdness; Yasmin, a budding scientist with a green thumb. Together, they plan to escape this enchanted prison.

Ritter is delightfully evil and sociopathic as the young witch Natacha, threatening and mocking the children at all times. She has icy blue/teal hair, apple red lips, and a gorgeous wardrobe full of bright colors (the makings of an amazing cosplay). Costume designer Autumn Steed (Dimension 404) and makeup artist Olga Kirnos (Titans) give Natacha a punk mermaid color palette, complete with wickedly black-lined eyes dusted in glitter. She can be playful, even funny at times, but her short temper leaves the kids (and the audience) on edge, anticipating her next outburst.

There’s also Lenore, a hairless cat who can become invisible when she feels like it. A real cat is used but replaced with CGI when it needs to do more than just sit — like say, become invisible. The mischievous feline is not-so-affectionately referred to as “skin-bag” by Yasmin. Lenore is unpredictable and has an interesting character arc of her own.

Yasmin shows Alex the apartment’s epic, Hogwarts-like library that can hold anything and everything. The style is similar to The Pagemaster, with a hint of Casper. This room essentially becomes Alex’s working space, where he’s expected to write stories all day in preparation for each night’s reading. Otherwise, he dies. No pressure.

As he reads from his Nightbook, vintage-style title cards pop up on screen, like grindhouse trailers from the ’70s, a surprising and cool homage to the horror genre. The stories play out like a mix between a kid’s stage production and an episode of Are You Afraid of the Dark? Alex’s tales are actually creepy, much to Natacha’s liking, even though she regularly criticizes his knowledge, or lack thereof, of horror mythology. “Everybody knows it takes two days to grow full fangs,” she scoffs.

The best part of Nightbooks is by far the meticulously crafted set design. Production designer Anastasia Masaro (The Imaginarium of Doctor Parnassus), along with set decorator Peter P. Nicolakakos (Star Trek: Discovery), creates a uniquely spooky residence that isn’t all gloom. It’s old, creepy, and covered in cobwebs, but has splashes of day glow and pastel. Despite being a prison for children who fear for their lives at every moment, the apartment is otherwise a pretty incredible place.

Nightbooks is a wildly imaginative twist on fairy tales, drawing inspiration from classic fantasy adventures like Coraline and The Chronicles of Narnia, with some genuinely creepy Goosebumps-esque moments bordering on outright scary. It’s an enjoyable watch with some intriguing mysteries, three-dimensional characters, and plenty of colorful ooze and slime. And if all that doesn’t do it for you, there’s also a majestic black unicorn.

Nightbooks premieres on Netflix on September 15.