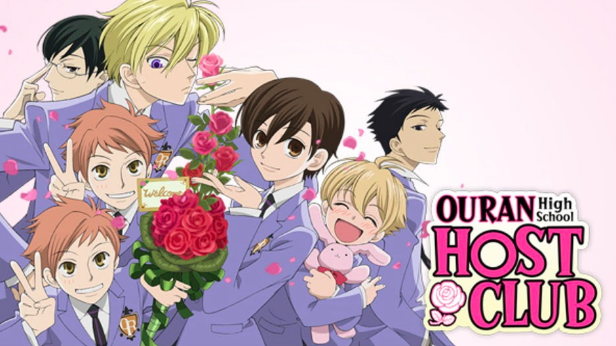 This time has been hard with everyone in quarantine and worrying about the state of the world.

But there are always ways to get a break from the stress and escape to another world, where our problems don’t exist and we can laugh and be one with ourselves. Why not watch some anime to do just that? In fact, why not try a classic anime like the one we’re talking about today? What anime might that be? It’s Ouran High School Host Club.

Ouran High School Host Club is a 26-episode anime based on the manga of the same name by Bisco Hatori. It follows the day-to-day of Haruhi Fujioka, a first-year scholarship student at the prestigious private institute of Ouran Academy. While looking for a place to study, Haruhi stumbles into music room #3 and finds the school’s Host Club.  After accidentally knocking over a very expensive vase, priced at 8,000,000 yen, Haruhi is forced to join the Host Club to repay the debt of breaking the vase.

Each episode centers around events and the Host Club and Ouran Academy, while Haruhi gets acclimated to the culture shock of now going to school with rather wealthy classmates and the differences in how Ouran functions compared to a normal public school. In addition to that, there are also episodes that center on the other club members and how being in the Host Club has changed their lives for the better.

The other club members consist of third-year students Mitskuni Haninozuka (also known as Honey Senpai) and Takashi Morinozuka (also known as Mori Senpai), first-year students and twins Hikaru and Kaoru Hitachiin, and second-year students Kyoya Ootori and self-proclaimed king of the Host Club, Tamaki Suoh. Throughout the anime, you’ll see each of the other members grow and change as the series goes on through their interactions with Haruhi and her different worldview compared to the ones they grew up with.

It’s watching each character learn and change that makes watching the anime so much fun and so rewarding. It may also teach you about yourself in some ways, just by watching these characters learn new things about themselves or realize things that they’d never noticed before. Like Hikaru and Kaoru learning to be more independent from each other or Tamaki learning to ask for help just as much as he’s willing to jump in and help others.

One of the most interesting tidbits of the series is the genderfluid expression. You may have noticed that Haruhi’s gender hasn’t been mentioned as of yet. Well, that’s because one of the interesting things about the anime is that Haruhi is a teenage girl who’s presenting as a boy while in the Host Club. Even at the beginning of the anime, in the first episode, she says that she’s not worried about whether people recognize her as a boy or a girl. She’s more interested in being seen for who she is and not what gender she presents as. This idea of gender identity being fluid comes up a lot and it’s led to Ouran being an anime that resonates with many in the LGBTQ+ community. Even Haruhi’s father expresses his gender identity in a fluid way.

In fact, one of the central themes of the series is that no person is ever meant to be singular in any part of their life. Tamaki doesn’t have to be the hero all the time, Kyoya doesn’t have to fit into the role his father has laid out for him, The twins don’t have to be dependent on only each other, Honey can be tough and still love cute things, Takashi can be a sweetheart even with his intimidating demeanor. Even Haruhi learns that though she’s grown up taking care of herself and not relying on anyone, that even she needs help sometimes and that it’s okay to reach out to others. As mentioned earlier, seeing the characters learn more about themselves and grow is one of the most rewarding parts of this anime.

Another amazing part of Ouran is the top-notch humor. You’ll catch yourself laughing at least once every episode. Whether it’s Honey scheming to get his hands on some sweets or the twins getting into an all-out food fight, there’s always something happening or someone making a slick comment that will cause a chuckle. Most of the time it’s Tamaki and his emotional outbursts that give most of the hilarity each episode. But the rest of the cast carries their weight in this regard as well. Haruhi’s father never leaves a scene without doling out his own brand of hilarious behavior. From playing the protective father to giving heartfelt but funny portrayals of the well-meaning but embarrassing parent.

With all that said, if you’re looking for a series that’s short enough to be binged in one day but full enough to not leaving you with a shallow experience, Ouran High School Host Club is the anime for you. It’s the slice of life anime that never stops giving and always leaves you with a message to take away.