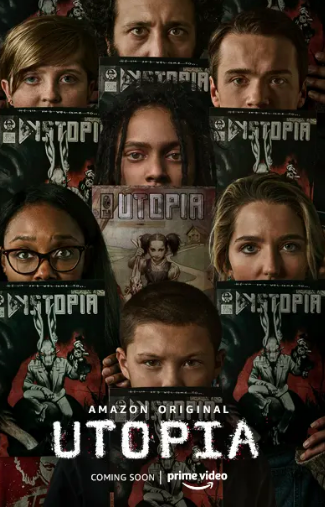 One Named series rock. Lost. Fleabag. Sherlock. Succession. Utopia. The world of graphic novels provides the perfect backdrop for a culture obsessed with animation. I’m not gonna pull any punches, I absolutely loved this show. Like, seriously. What a wild ride! I unapologetically watched all eight episodes over a weekend. The binge was totally worth it.

Utopia opens with the following warning:

“This program is a work of fiction, and not based on actual, related, or current events. It contains scenes that some viewers may find disturbing. Viewer discretion is advised.”

Enough said. If you are sensitive to violence, or, you know, that thing where fiction could be predicting the future? Don’t watch this series. If your neurotransmitters fire full-tilt boogie pleasure when you’re traveling down the rabbit hole of complex conspiracy theory, Utopia is the perfect show for you to watch right now.

Gillian Flynn is hands down one of my favorite writers. Her dark side is a joy to behold on screen. I read Gone Girl and Sharp Objects and instantly connected to the people who reside in her mind and welcomed her characters to occupy space in my imagination as they revealed their stories to me.

In the pilot, Episode 1: “Life Begins,” Flynn instantly endears our four fearless heroes to us in the first five minutes and forty-five seconds. How does she do this so quickly? It’s a team effort, really — the perfect equation of location, casting, sound design, lighting, costume, props, script and actors comes together brilliantly in this super-violent and deliciously fun thrill ride of a series.

Utopia is placed in Chicago, which is the heart and soul of American Theater. It’s delightful to see so many Chicago based actors cast in this show. Our five nerdy heroes, Samantha (Jessica Rothe), Becky (Ashleigh Lathrop), Wilson Wilson (Desmin Borges), Ian (Dan Byrd), and Grant (Javon “Wanna” Walton) compel the audience to instantly care for them and invest in their journey to Utopia. That, my friends, is some excellent writing.

I love being immersed in a story that challenges me. I love being surprised when showrunners have the guts to place the heroes of the narrative into situations that seem impossible to resolve.

Utopia opens with a newly engaged couple Ethan (Calum Worthy) and Olivia (Maya Kazan, granddaughter of legendary Hollywood director Elia Kazan) opening the door to a house in Chicago left to Olivia by her grandfather, who was a big time hoarder. As the couple takes on the endless task of decluttering the mess, Ethan comes across the original artwork from a comic book called “Utopia,” which is the never found sequel to the original comic, “Dystopia.”

Ethan Googles Dystopia and sees dollar signs as he realizes, “Fanboys are gonna go nuts for this!” The couple decides to sell Utopia to the highest bidder at Fringecon Dystopia Fanboys (and girls).

Samantha, Becky, Ian, Grant, and Wilson Wilson have never met in person but have been virtual friends for a year as they plow through the hidden prophecies of Dystopia via a private server. The group of misfits unpack the global warming and pandemic themed conspiracy theories outlined in the graphic novel. Our quartet decides to meet up in Chicago, pool their cash, and be the nerds who buy Utopia.

It’s such a lovely experience watching actors in the first season of a new show. The core cast are not “A list” actors and gives the audience the opportunity to dive into the lives of the people we experience on screen without the weight of celebrity.

Flynn is a phenomenal showrunner. Comic book culture is stereotypically white male nerd. Placing an ethnically diverse cast in this space allows the story to open up and reveal nuance from the perspective of the female-identifying characters.

It’s also wonderful to see John Cusack and Rainn Wilson as the hook to attract viewers to the story, which is actually centered around our five young nerdy heroes. I must admit, John Cusack was one of my favorite actors when I was a teenager. Better Off Dead and Say Anything are two of my all-time favorite movies from my high school years.

The blend of science, technology, and the consequences of global warming make watching Utopia unfold during the actual pandemic we are living in right now super mind trippy. During the pilot, I was admittedly freaked out by the fact that this show was shot pre Covid-19 reality.

Although Utopia is not exactly like what we are going through right now, it’s fascinating to think that I can turn off the show, go online, and get sucked into actual conspiracy theories and pandemic rabbit holes that could easily be used as plotlines for Season 2 of this show. Please enjoy Utopia, with caution.