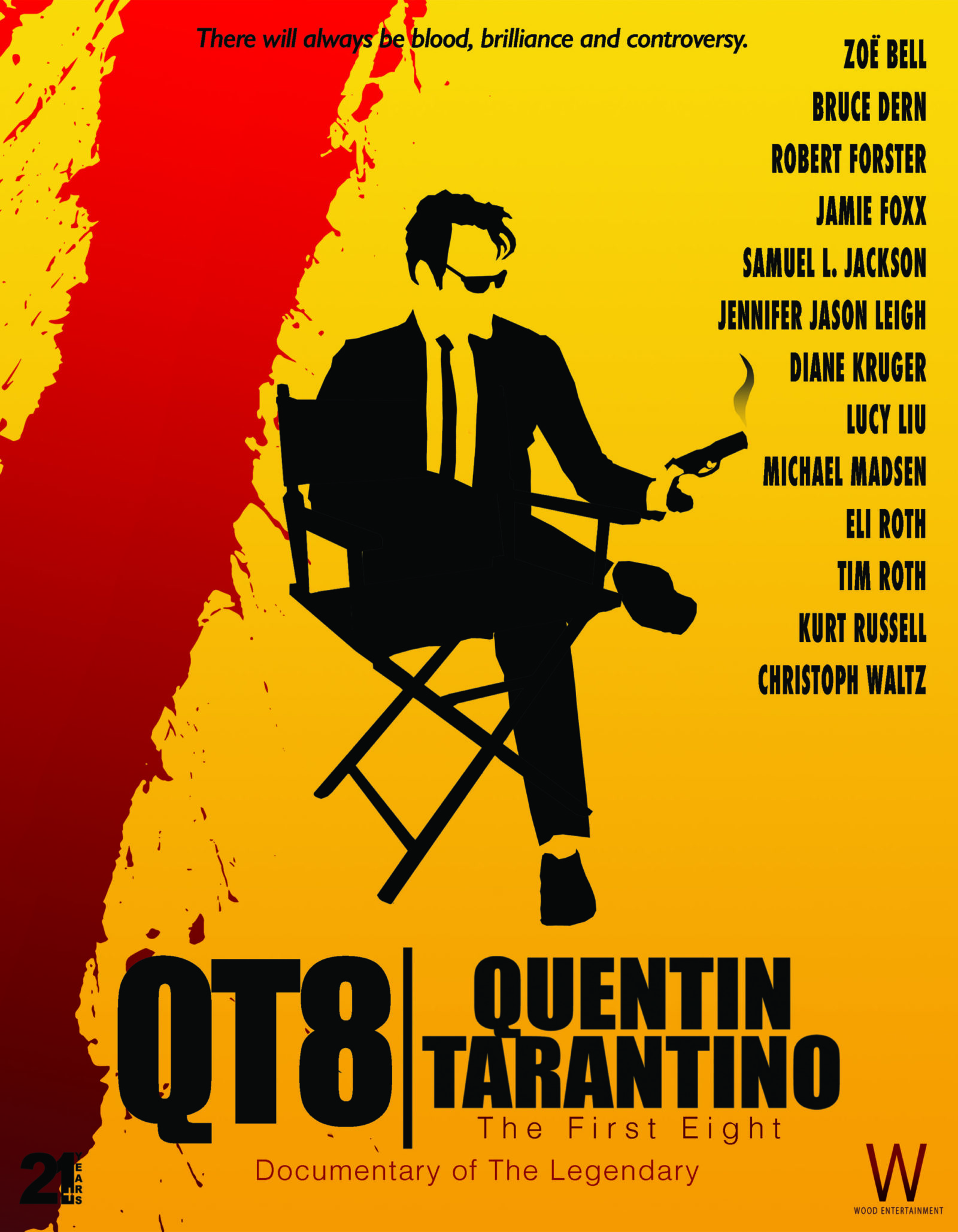 One of the most influential and controversial filmmakers of our time — Quentin Tarantino — is profiled in QT: The First 8 which covers his 30-year cinematic history.

I’ll begin by saying I’m not your average Quentin Tarantino fan, and as a Black woman, I have a love/hate relationship with the filmmaker. Both race and gender aside, there’s also other issues I’ve come to learn about his auteur style that begs the question of whether he has an original creative bone in his body. When I was in film school, I wrote a paper about Tarantino because his Reservoir Dogs resonated with me, as well as the story of Tarantino himself. I, too, used to work at a video store spending my evenings and days off watching movies until there was no tomorrow.

I was that geek at the video store who knew the name of every actor in every movie and can tell you where to go find what you’re looking for even if the description of what you wanted was vague. The character Randy Meeks from Scream and I were definitely kindred spirits. I also dabbled a bit in screenwriting and admired the fact that the chamber piece flick Reservoir Dogs was written in three days. This movie has some of the best dialogue, including the compelling “Like A Virgin” speech at the opening scene. It is definitely worth your time.

I’ve gone through ebbs and flows of the social consciousness critiquing race, feminism, and art through film. And as I’ve grown older (and hopefully wiser) my relationship with Tarantino’s work is like an ex-boyfriend. I keep coming back knowing he’s no good for me, but I love the time we share together and he’s my guilty pleasure. I can’t really show him around to my friends and family and share public displays of affection for fear of ridicule — yet instead I text him in secret and we only hangout on very specific terms.

Here’s the thing. Tarantino’s movies will be indelibly printed in our collective minds and his impact on pop culture cinema is nothing to be ignored. He has his share of fans and his share of haters and perhaps that’s why he’s such an enigmatic figure. However, as a fan and sometimes former fan, I see why I’ve loved and also disliked who and what he represents.

Let’s start with the problems and then we will buff around the jagged edges with positive stuff later. Before I dive into the review of QT8: The First Eight, I first want to establish that this documentary serves as a love letter to the filmmaker from his devoted colleagues, friends, and partners — it does fawn over Tarantino a bit. This, of course, is completely understandable given that many of the subjects in this film, like Tim Roth, Richard Gladstein, and Michael Madsen, have worked with him for nearly 30 years. A slightly less subjective view of the man would have created a more thoughtful study and analysis of this deeply complex filmmaker.

Tarantino’s problems began with Spike Lee’s critique of his overzealous use of the N-word. Then there’s the copying (or inspiration) Tarantino derives from other films. Nearly all of his films have similar plots, cinematic shots, or character arcs from movies that have impacted him over the years. In a 1994 interview with Empire magazine, Tarantino said, “I steal from every single movie ever made.”

There’s also the issue of his use of putting women actors in dangerous situations, such as using Uma Thurman as a stunt driver in Kill Bill Vol 2. That resulted in a permanent neck injury. Or Quentin Tarantino himself nearly squeezing the life out of Diane Kruger in Inglorious Basterds. And let’s not forget his 25-year relationship with a sexual predator.

Here’s the thing though, QT8: The First Eight addresses all of this. The doc doesn’t spend too much time on it because the idea is to get you to focus on his body of work as an artist and to adore him as the perfect director that he is, but there it all is as a footnote to add to QT’s history.

The documentary starts from Reservoir Dogs (one of my favorite films of all time) and ends at Once Upon A Time In Hollywood. It tells the tale of how Tarantino made his first trip to Cannes that year presenting Reservoir Dogs after leaving his friend’s couch in Los Angeles and came back a star. Miramax bought the rights to the film, which began the start of his relationship with Harvey Weinstein.

The documentary explores films that target race like Pulp Fiction and Django Unchained and addresses the incessant use of the N-word. Actor Jamie Foxx gave some commentary about the hypersensitivity surrounding the criticism. Stuntwoman and actor Zoe Bell shared her thoughts about QT making the egregious error of putting an untrained Uma Thurman in a stunt car without a team to support her, resulting in a car accident that could have killed her. She simply said, “It was a mistake.” And Diane Kruger’s response to QT putting his hands around her neck strangling her to make the scene more real, which nearly took her life as well, was — “Quentin is very hands on.”

I did appreciate the film devoting time to Harvey Weinstein and the many allegations against him from women (including actors who have worked on Quentin’s films) featured in the doc. The doc never directly dives into QT’s direct relationship with Harvey outside of being a producing partner; it simply regurgitates headlines and news stories intercut with scenes from Tarantino’s films, which I thought was kind of an odd form of editing. There is a chef’s finger kiss moment that reveals the character of Harvey Weinstein as told by Michael Madsen in animated form that you just have to see for yourself. The story is just too hysterical to believe but makes so much sense about Weinstein’s issues with entitlement and control.

QT’s presence in the film is minimal. There are no soundbites or interview clips from him directly; his story is told through images of old stock photos and crafty animation. I personally would have wanted to learn more about some of the quirky aspects of QT’s work like his weird foot fetish — if you haven’t noticed, Tarantino has a thing for women and feet. I also would have liked more script to screen story. I’m always fascinated with how a screenplay becomes a movie. True Romance was a damn good script and I would love to know more of the story behind that.

Now here’s the highlights of what I did love. I appreciated that they mentioned the QT multiverse, which is kind of like the Marvel Cinematic Universe because this guy has managed to integrate all of his fictional characters into his films. Pulp Fiction’s Vincent Vega and Reservoir Dogs’ Vic Vega are brothers. Dr. King Schultz in Django Unchained is connected to Paula Schultz, the infamous tombstone The Bride was buried alive in.

Funny moments of QT interacting with the cast, like Eli Roth recalling a moment when they got wasted on the set of Death Proof, showed a humorous side to the filmmaker.

My feelings for QT will likely forever remain complicated, but I just can’t stay away from his movies. And his reel and body of work is something that cinephiles will talk about for quite a long time.