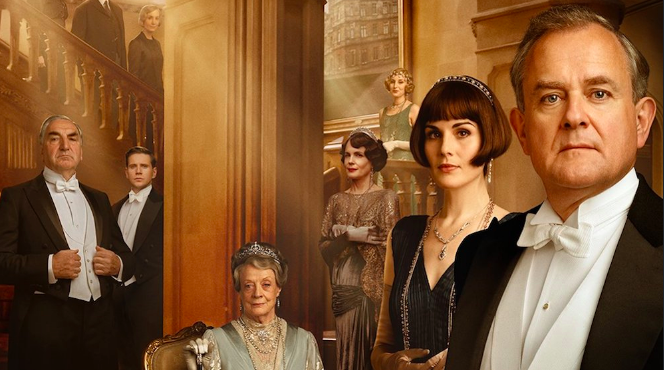 A true love letter to the fans, the film Downton Abbey is a great escape.

You should probably already be well-versed with the characters to understand a lot of the more intimate details. But, the film is still enjoyable, even if you are meeting the cast for the first time. The thing about Downton Abbey is that it is driven by the characters rather than the actual story.

The plot centers around a royal visit to Downton Abbey by King George V and Queen Mary. The real story is how the characters handle it all. It only made sense to have the king and queen come to Downton. The film showcases the camaraderie of the Downton staff and highlights the characteristics we can’t forget. We get to live, for a moment, in the upstairs and downstairs world and understand the love for the Crowley family and this house. The pomp and circumstance of it all draw you in.

Downton Abbey hits the big screen with an utterly enchanting cinematic version of the hit PBS television series. Director Michael Engler has given us the captivating moments we have missed from the series, while Julian Fellowes continues to wow us with the writing of characters he knows so well. The burning questions we had from the series finale were answered impeccably. The film does a brilliant job conveying the romance, misjudgments, and the shenanigans that ensue as we see the Downton staff welcome their Royal Highnesses.

Loyalty, love, and heart are at the center of Downton Abbey. The gallantry and pageantry that we expect from a British period piece are alive and well in the story. It’s fun to watch. Every time that wide-shot of Downton Abbey against a beautiful skyline hits the screen, you can’t help but gasp from its beauty. They’re gorgeous shots. The cinematography is bold, reminiscent of Joe Wright’s Pride and Prejudice. The contrast of the colorful and open space of the main level with the pale colors and tight quarters of below is even more dramatic on the big screen than seeing it on television. Downton Abbey has found its rightful place. We can no longer settle for the width of our TVs. The theater experience spoils its audience.

The best thing about this film is that it’s not carried by one actor, but rather by the entire cast — a cast that fans have gotten to know and have fallen in love with throughout the TV series’s six seasons. We get to see all of our favorites incorporated into the film coupled with excellent performances. These performances are enhanced by the themes and big-picture ideas that come from the story, like sexuality, status-quo, the social hierarchy within your group, and female power dynamics. The characters are the real draw to this film.

The back and forth between matriarch Violet Crawley, played by Maggie Smith, and Isobel Crawley, played by Penelope Wilton, continues to be the perfect touch to an epic friendship. Lady Edith (Laura Carmichael) and Bertie (Harry Hadden-Paton) continue to show us how perfect they are for each other. Edith is consistently challenging the woman’s role in this period, and Bertie is her support along the way. Edith is the character that challenges the status quo and the female dynamic in the film. She dresses herself (i.e., no lady’s maid). She would rather work instead of host parties due to her title, and she has no nanny for her daughter nor valet for her husband. Early on in the television show, Edith’s character had the most depressing life. But now she is the embodiment of an empowered woman in the early 20th century.

Tom Branson (Allen Leech), Irish chauffeur turned stately gentleman, gets his groove back in this film, and I couldn’t be more psyched about it. We’ve been waiting for Tom to find his happy ending with a lucky lady who understands his outsider perspective. Let’s face it — Tom doesn’t have that many friends these days. Unfortunately, the film lacks the screen time for Lady Mary’s husband, Henry Talbot, played by Matthew Goode. I would have liked to see Tom and Henry on screen together. Their friendship was just beginning to blossom when we left them in Season 6 of the show.

Thomas Barrow (Robert James-Collier) is one of those characters who has had it rough at Downton Abbey. If Lady Edith was the black sheep upstairs, Barrows was the black sheep downstairs. His role in the film comments on the views of sexuality in the early 20th century. He’s the character that we loved to hate back in the early seasons of the show, but have grown to love. A new outlook on life followed his suicide attempt in Season 6. This version of Barrow is one that audiences wanted to succeed. When he was named butler of Downton Abbey, it seemed that everything would be all right. Of course, in the film, Barrow must take a step back to move forward. All for the best.

Some of our other fan favorites make their way on the screen. We get to see what becomes of our romances that were revving up in the last season: Carson and Mrs. Hughes, Daisy and Andy, and Molesley and Baxter. The best part is that Cora and Robert, Earl and Lady Grantham, are still happily married and proud to welcome you to Downton Abbey.