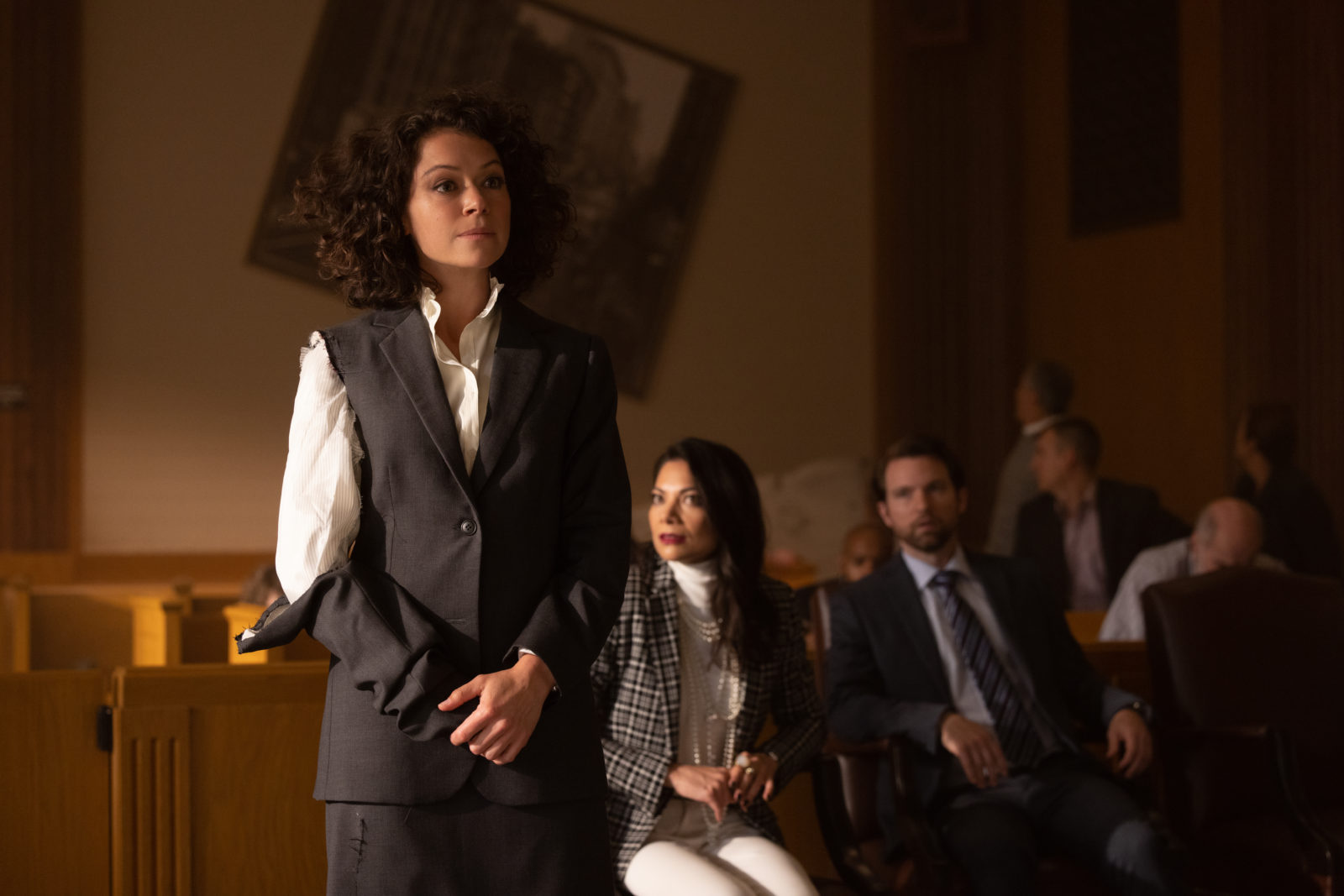 If you thought Tatiana Maslany was incredible in Orphan Black, just wait until you see her go green in Marvel’s She-Hulk: Attorney at Law, the latest Disney+ series in the MCU’s Phase Four. The nine-episode half-hour legal comedy features a stellar cast and lots of laughs. When it comes to Jennifer Walters, you’ll love her when she’s angry, or even just mildly annoyed.

Successful attorney Jennifer Walters (Tatiana Maslany) is a 30-something woman living in California trying to balance work, friends, family, and dating. The west coast is a nice change of scenery for the MCU, and honestly, NYC deserves some time off after it’s been wrecked repeatedly. On a road trip with her cousin Bruce Banner/Smart Hulk (Mark Ruffalo), the two get into an accident after almost hitting a spaceship. Bruce later tells us was a Sakaarian hovercraft. This results in Jen’s Hulk-ification.

She is recruited to be the (green) face of Goodman, Lieber, Kurtzburg & Holliway (GLK&H)’s new division catered to superhuman legal matters. Jen, who is major hair goals both as her naturally curly self and as the luscious-locked She-Hulk, brings along her fashionable and funny best friend/paralegal Nikki Ramos (Ginger Gonzaga). Nikki is the ultimate hype woman in both her personal and work life, not only for Jen’s newfound abilities but in general. They quickly bond with the equally comical Augustus “Pug” Pugliese (Josh Segarra), a fellow lawyer in the division.

Tim Roth reprises his role as Emil Blonsky/Abomination from 2008’s The Incredible Hulk starring Edward Norton. If you remember back in Shang-Chi and the Legend of the Ten Rings, Wong (Benedict Wong) fought against Abomination in a cage match. It’s all explained in this series. How and why has Ruffalo appeared in teasers and trailers as a human Bruce Banner with his arm in a sling and a completely healed Smart Hulk? Well, you’ll get that answer, too.

Super strong social media influencer Titania (Jameela Jamil), one of She-Hulk’s longtime foes from the comics, busts through the wall, forcing Jen to “out herself” as a Hulk. The cast includes Mallory Book (Renée Elise Goldsberry), another GLK&H attorney in the superhuman law division, and the highly-anticipated return of Matt Murdock/Daredevil (Charlie Cox).

Jen Walters is up there with Thor and Scott Lang in comedy. Like in the comics, she regularly breaks the fourth wall to comment on the ridiculousness that comes with being a superpowered being — like having no choice in what the public names you.

One of the series directors Kat Coiro (Dead to Me), told The Hollywood Reporter, “She-Hulk was breaking the fourth wall way before Deadpool and way before Fleabag. Back in the comics, she was always meta, and she was always taking control of her story and her narrative.” Jen’s quick to call out the weird things that happen in the super-world or when someone is being noticeably dramatic. She finds humor in everything and even laughs about the sad things in life.

The series gives Ruffalo the chance to really have fun with the role. Bruce says “bruh” at one point, something I need him to say more often. He and Maslany’s chemistry shows through in Bruce and Jen’s sibling-like relationship, consistently teasing and one-upping each other.

One of the funniest things about the series is that Bruce assumes he’s about to train his cousin to be an Avengers-worthy superhero. But she did not spend all those years in law school, taking out massive loans, to suddenly drop it all and be a Hulk. Why, because she got a little gamma-irradiated blood that turned her into a giant green goddess? No, she’s got cases to win.

Jen questions whether or not the Avengers offer healthcare or even pay, for that matter. Considering Sam Wilson, aka Falcon/the new Captain America, couldn’t get a loan from a bank, it’s safe to say this is not an appealing career choice unless you’re rich (Tony Stark) or a god (Thor). Jen’s definitely more Jessica Jones than Kamala Khan in her desire, or lack thereof, to be a hero.

She-Hulk is very much a comedy, and has a distinctly feminine touch that doesn’t play into the reductive, pandering “strong female lead” trope. Head writer Jessica Gao (Rick and Morty) talked about a particular scene in the first episode that she fought to keep in, and I’m glad she did. After the accident, Jen stumbles into a random bar to clean herself up in the bathroom. Four ladies come in and immediately take care of her, applying makeup, giving her shoes, and lending her a cell phone. The writer said, “Truly, the women’s bathroom in any club, bar, strip club, I don’t care, any public women’s bathroom is the safest, protective, and supportive environment.”

A big theme in She-Hulk is that Jen can control her Hulk form since women are used to suppressing emotions, especially anger, and the series shows the daily struggles of being undermined at work, catcalled, told to smile more, etc. In the trailer, Bruce tells Jen that her “transformations are triggered by anger and fear,” to which she replies, “Those are, like, the baseline of any woman just existing.” In an interview with BGN, Maslany said, “I love that it makes Bruce incredibly frustrated that he had to go to an island for 15 years to deal with his anger and she’s like, ‘this is the easiest thing on the planet.’”

In the same way that Moon Knight and Ms. Marvel had their own distinct styles, She-Hulk is a standout with its satirical tone. Jen doesn’t have cute crushes or pine over teammates. She’s active if reluctantly, dating (on an app, no less). The trailers show her carrying a hunky dude too (presumably) in her bedroom which is probably the most sexual the MCU has gotten (not counting the awkward sex scene in Eternals).

She-Hulk: Attorney at Law is one of Marvel’s best series to date. It’s a legal comedy that just happens to star comic book characters. Tatiana Maslany leads an amazing cast as the perfect Jennifer Walters/She-Hulk. If you like fun, then you’ll love She-Hulk.

Jen Walters’ Consciousness is Explored in ‘She-Hulk: Attorney At Law’