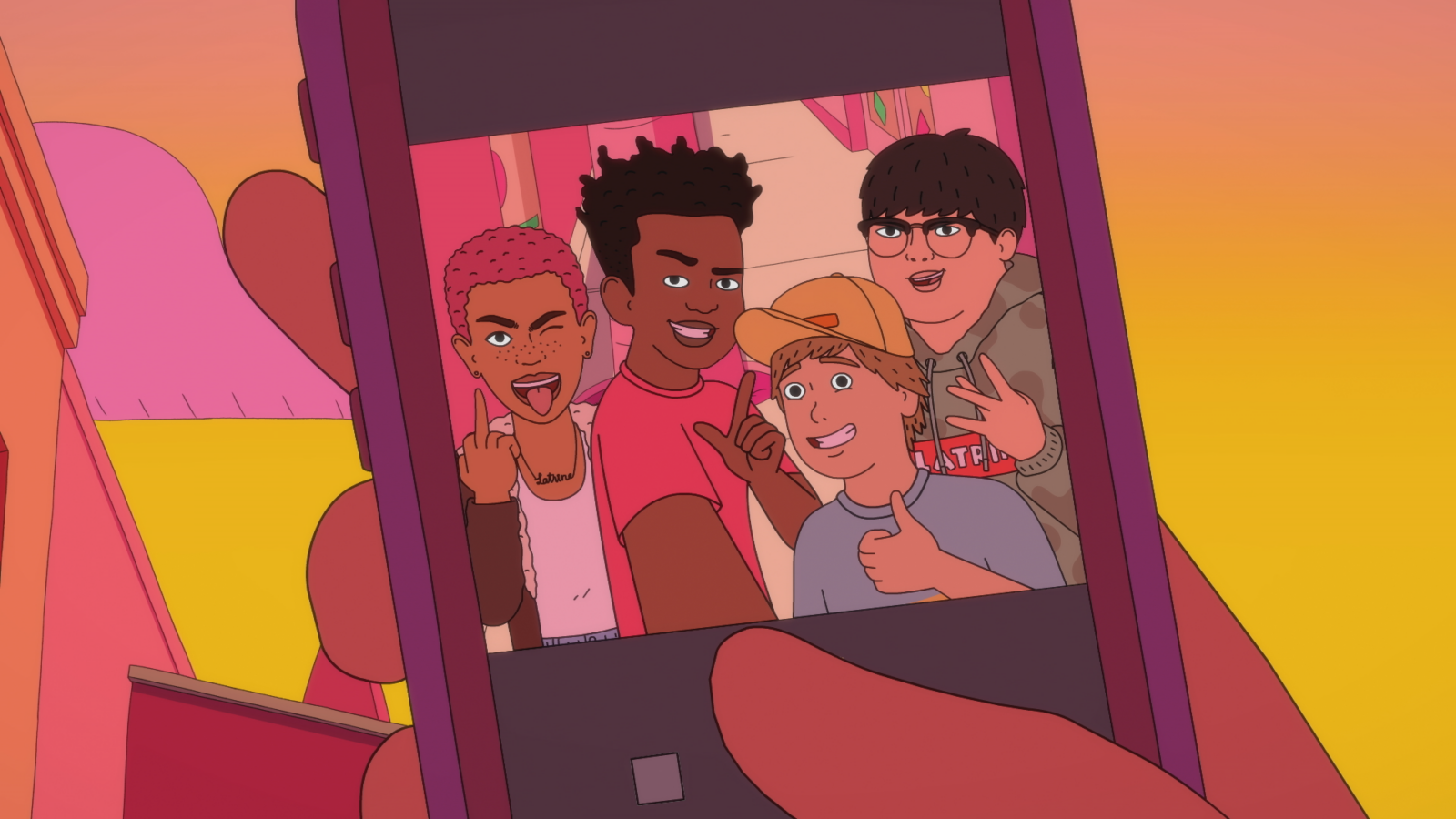 Prime Video’s latest animated adult comedy series Fairfax explores the absurdity of drop culture. Created by Matthew Hausfater, Aaron Buchsbaum, and Teddy Riley, the series follows a group of savvy pre-teens pursuing their clout dreams. How far will they go to get it?

The series stars Skyler Gisondo (The Righteous Gemstones) as Dale, Kiersey Clemons (The Flash) as Derica, Peter S. Kim (Housebroken) as Benny, and Jaboukie Young-White (The Daily Show) as Truman. Some guest stars include Colton Dunn (Superstore) as Principal Weston, Billy Porter (Pose) as Hiroki Hassan, with John Leguizamo (When They See Us) as Glenn the pigeon, and J.B. Smoove (Curb Your Enthusiasm) as Quattro the pigeon. It’s produced by Hausfater, Buchsbaum, Teddy Riley, and Peter A. Knight (Bojack Horseman), along with Jon Zimelis and Jason U. Nadler for Serious Business (@midnight), and Chris Prynoski, Ben Kalina, and Antonio Cannobio for Titmouse (Big Mouth). Somehoodlum, the artist behind the character design, and clothing company Pizzaslime served as consulting producers.

Fairfax opens with Hyung-Joon Choi (who goes by Benny), Derica, and Truman rushing to Fairfax Avenue for the latest drop from Latrine, a clothing and lifestyle brand targeted at youth culture. Each has their own distinct identities: Derica, an activist and fashion enthusiast; Benny, a sneakerhead; and Truman, an aspiring indie filmmaker. The three friends are on an endless quest for clout and overnight influencer status.

Dale, an outdoorsy kid who unironically rocks a fanny pack, and his family just moved to Los Angeles from Oregon to take over his uncle’s vape shop on Fairfax, which he sees as the “Hogwarts of fashion.” Dale’s REI hiking shoes and cargo shorts style is accidentally normcore. He’s honestly one of the purest characters I’ve seen in a while, and Gisondo plays that perfectly.

After saving him from a shady reseller trying to buy his Patagonia hat, the crew teaches Dale the ins and outs of drop culture, how to establish his “brand” on social media, and general lessons in dopeness. Derica, Benny, and Truman may be striving for status, but they’re genuine best friends. It only takes a day for them to welcome Dale into the fam. His constant optimism, naivete, and authenticity are easily lovable qualities, especially in an environment full of fake people.

Fairfax Middle School, where even the principal is always doing the most, is filled with equally clout-obsessed kids with varying levels of popularity. Ben Schwartz (Parks and Recreation) has become an expert when it comes to obnoxious guys with an abundance of confidence. He plays Cody, the boyfriend of Dale’s crush Lily, played by Zoey Deutch (Zombieland: Double Tap). He’s a bro-like influencer who’s already established his platform built on “pranks, trick shots, and a charitable component.” Camila Mendes’ (Riverdale) Melody is a mega-influencer who reaches verified status on the ‘Gram and throws a Puma-sponsored pool party.

For anyone unfamiliar with the phenomenon, hypebeast culture is all about exclusivity. Loyal consumers keep tabs on their favorite brands, waiting for a limited release item to drop. They stand in long lines for hours just to purchase whatever the latest item is, whether it’s sneakers, a belt, or a Dr. Phil box tee. The streetwear subculture has evolved into high-end luxury style brands endorsed by celebrities and marketed on social media.

The trailer gives the impression that it’s full of cringey dialogue and Gen Z stereotypes. However, I found the dialogue pretty realistic while satirizing modern slang and cultural references in a similar vein to Workaholics. The show pokes fun at using unnecessary abbreviations, giving everyone nicknames, and how quickly things aren’t cool anymore, like dabbing.

Some are already calling the show a rip-off of Bojack Horseman and Big Mouth. While I like both of those series, Fairfax is definitely its own thing. The titular location and hypebeast culture are quite fascinating, especially from a Gen Z perspective.

In an interview with BGN, Peter Kim said that the heart of their show is “four friends hanging out and really trying to become a crew and look out for each other.” He explains that, when it comes to clout chasing, the show is holding up a “mirror [to] society and what’s going on with kids these days and how ridiculous it can get.”

At first glance, the animation may not seem like anything special. By the middle of the first episode, I was in love with Somehoodlum’s aesthetic. The pinkish color that envelopes everything when it’s dusk is so trippy, with a slightly lo-fi feel to it.

Fairfax is a hilarious satire about self-aware middle schoolers who can recognize when they get caught up in the hype. The voice actors wonderfully capture the personalities of their characters, who are instantly likable. With a dope soundtrack and gorgeous illustrations, this series is a must-watch (and re-watch).