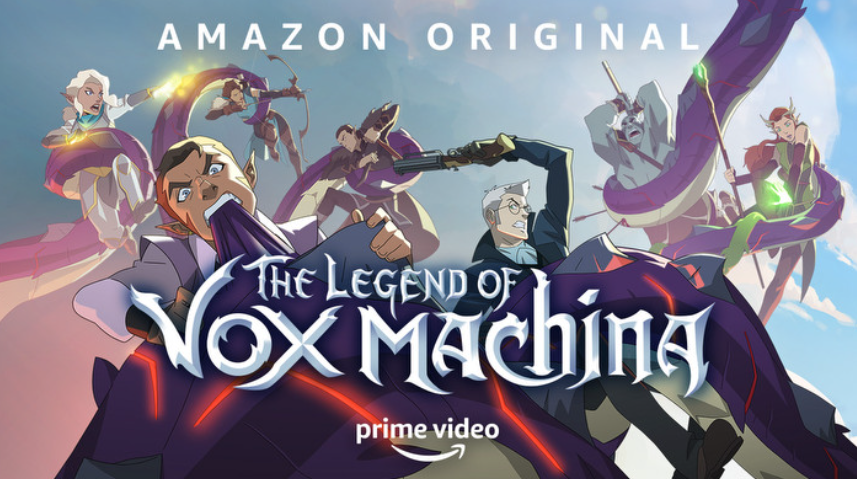 Let’s roll the dice on this new animated adult series, The Legend of Vox Machina. For anyone who has ever played an iota of Dungeons and Dragons (D&D), the rules are fairly straightforward, but it does require time outside the game to really understand the mechanics as well as character development.

The Legend of Vox Machina is composed of seven friends who somehow manage to stumble their way into a variety of unsavory situations. Together these friends fight for what they want in a land filled with magic and dragons. Can this ragtag team of misfit friends save the day? The first six episodes of the twelve-episode season, which are shared in advance to selected writers for Prime Video, show just how vulgar and blunt the series is, yet this somehow manages to be appealing and endearing. The characters’ sharp wit and hilarious antics grant audiences a look into their world without feeling out of place or wondering too much about how their world functions. The series has a level of accessibility for those who are curious about the game but haven’t yet had an opportunity to play. It is a great starting point to dip one’s toes in.

The stars of Critical Role, an American web series that started in 2015, have had a meteoric rise in recent history. Now with this series The Legend of Vox Machina being launched, their popularity can only grow. The group wasn’t always as popular as they are now. It started as a group of friends who were also accomplished voice actors getting together to play a game of D&D on a weekly basis. They couldn’t have foreseen how big they would get by doing what they enjoyed. If anyone is unfamiliar with their platform, don’t worry, it’s not a requirement to understand the series.

In the first season and the first campaign, we are introduced to the heroes of the series (if the term hero applies here). They are for the most part doing heroic actions to gain favor, money, and anything else they want. Despite this lack of selflessness that the characters exude, what is perhaps most impressive about this series is how easy it is to connect with one or all of the characters. The first character that hits her mark is Vex’ahlia (Laura Bailey), the half-elf archer and a crafty one at that. Her twin brother is Vax’ildan (Liam O’Brien), who proves to be a charming rogue character, and as stereotypical as that might sound, he makes it work.

To round out the ragtag friends, there is the brute muscle known as Grog Strongjaw (Travis Willingham), a barbarian character who is a little slow on the uptake of any situation, but he also proves to be a big old cuddly softy throughout the series. The gnome cleric is known as Pike Trickfoot (Ashley Johnson). The cleric class is the one that follows a specific god and promotes their ideals. In return, the followers are imbued with magical powers to help with their mission. Often this character is seen as the healer in the group. Keyleth (Marisha Ray) is a half-elf and a druid character that uses nature-based magic; her abilities seem to keep developing as the series continues. Scanlan (Sam Reigel) plays what most would consider to be a typical cocky and horny bard. Most evident is his trusty lute and humorous and, at times, overly sexualized songs. And the last and perhaps most interesting character is Percy (Taliesin Jaffe), who can shoot like no other. Percy’s past and his abilities are both a mystery in the series; however, with each episode, the layers are slowly peeled back, and a new piece of the puzzle is revealed.

The Legend of Vox is unique in the way that it is able to showcase the characters as meaning well, especially when they manage to muck up situations. Part of this could be attributed to the amount of character development in the show. Outside of the fantastic voice actors, the characters that they have selected to play, and the rich story lure they are using, it really comes down to the character development of both Percy and Pike. Percy’s unexplained family past is one that will hook its audience, but Pike’s journey of self-discovery is really what stands out from the series. What her journey will reveal is up in the air, but audiences can rest assured it will be one worth taking.

In recent years the tabletop gaming community has made great strides in becoming a more inclusive environment. Though The Legend of Vox does have sexually explicit scenes and handles same-sex interactions solidly, as well as presents it with the same ease and care given to hetero characters, it’s not enough. The show does little more than give lip service to the issue. It needs to have more LGBT representation if it is to compete with other animated series that showcase inclusion and diversity, like the Dragon Prince or to lesser extent Voltron and Blood of Zeus. It needs to level up its characters more.

With epic storytelling skills, stunning animation, and poignant dialogue in the most crucial of scenes, it’s no wonder why this series will draw audiences in from all levels of society. It’s a great way to jump into the magic and mystery that many lovers of the D&D gaming and newcomers alike can enjoy. Why not get lost in the adventure with this group of friends? Let’s just roll the dice and see what adventures await.

The Legend of Vox Machina is available to stream January 28, 2022, on Prime Video.