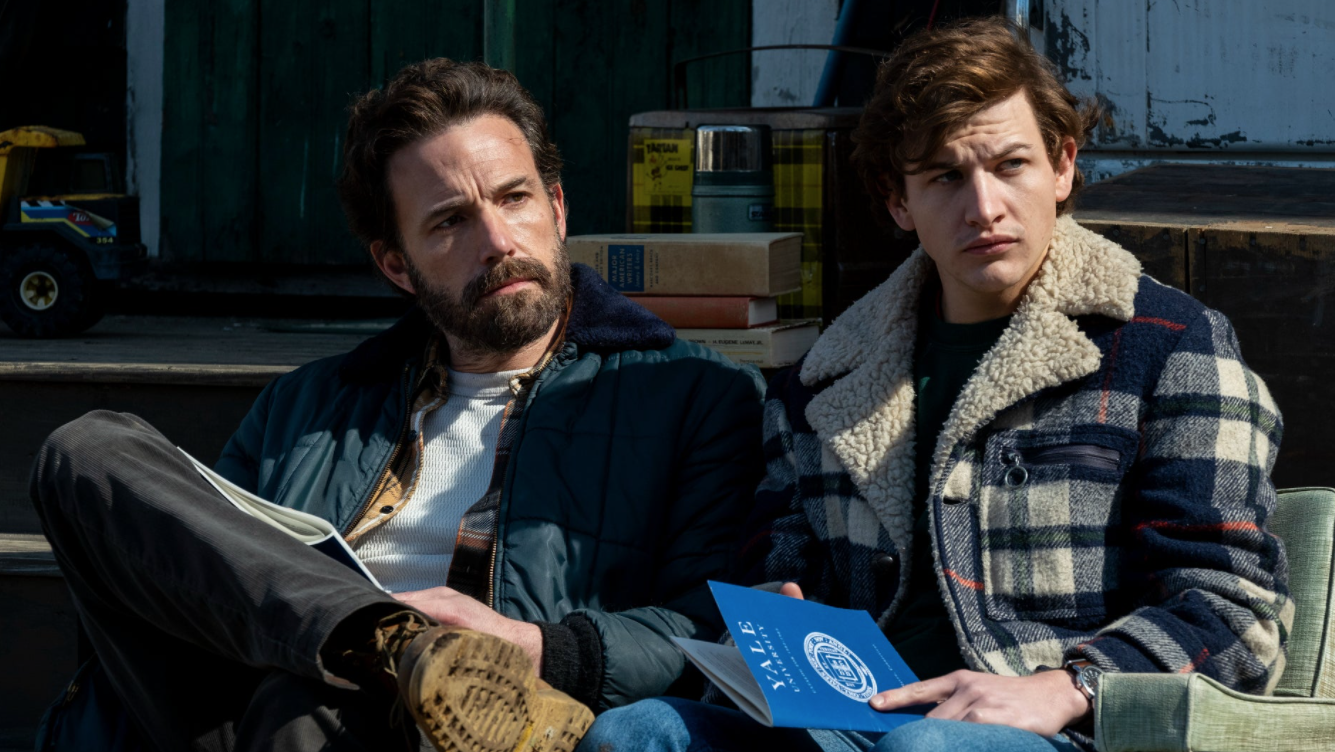 The Tender Bar is, at its core, a coming-of-age story. It’s not as drama-filled as one would think, but rather a boring ode to real-life, brought to the screen by heavy-hitting talent who do their best with a glorified made-for-TV movie.

Based on a popular memoir, the film, with Ben Affleck and George Clooney involved, runs away with cliches in an overdone, mildly entertaining way. The Tender Bar is not a film I would generally venture forth to the theaters to see, but at home, on Prime Video, would be a good call.

Directed by George Clooney (The Ides of March), The Tender Bar is based on the book by JR Moehringer. Set in the 1970s, the script was written by William Monahan (Kingdom of Heaven) and follows a boy named JR from age nine to post-college graduation. JR and his mother Dorothy move into his grandfather’s house in Long Island, New York.

With an alcoholic dad who barely has time for him, JR finds himself learning the ins and outs of life from his Uncle Charlie, a self-educated bartender who becomes a pillar in JR’s life. At a young age, JR knew he wanted to become a writer. Dorothy knew JR would go to Yale and become a lawyer. The Tender Bar shows how a kid from low means attempts to make something of himself.

One of the things that did resonate was the theme of love; love of self, love of family, and the pursuit of love. The mutual love JR and his family have for each other is showcased in a compassionate light. The small details are a nice touch. I also enjoyed the writing of the film, even though it caters to a very specific audience. As a writer, I enjoyed the blanket idea of wanting to become a writer and the relevance of reading, struggling, starting from the bottom, and pitching articles where you can. Since he was nine, JR wanted to be a writer, but it didn’t always go according to plan. It was a lot of trial and error. But the love and passion persisted. The fact that he didn’t do it alone makes for a better story. It takes a village, as they say, and the support JR got from those who care about him was enjoyable on-screen amidst the world we see ourselves in, separated by masks and the occasional six feet.

Putting the themes aside and understanding the time period of today, there were issues with how the women in this film were portrayed on screen. JR’s mother, Dorothy, drew the short stick in this film. Her efforts as a single mother were overlooked and overshadowed by a man who works at a bar, Uncle Charlie. Who gets most of the praise for where JR ended up in this film? Uncle Charlie. A single mother who only wanted the very best for her child should have been in the spotlight of this film, but she wasn’t. What was applauded were the hours a child sat at a bar that became his go-to second home.

The Black women in this film aren’t given strong storylines. Sidney and her mother are portrayed as mean, cruel, unkind, snide, backbiting, hurtful, ill-natured, catty, and all the other synonyms to the word I really want to say. Any female empowerment moment that was trying to have a piece of this film was snuffed out before it got any traction. The scene would end with the man having the upper hand. Not to mention, not one of these women was able to have a dialogue without it involving a man.

Memoirs are an interesting category to make a movie from. The problem with this film’s depiction of actual events was there was not enough at stake. There was not enough drama. It was lighthearted and easygoing, but that’s all it has going for it overall. JR could go to Yale or not. There was a lot invested in what this character did or didn’t do. Clooney’s direction for the film gave off similar comical vibes to that of Taika Waititi and Wes Anderson, but it was missing a unique perspective. The Tender Bar is nothing special, which is surprising from such a talented group in front and behind the camera.

The Tender Bar is award bait for those who drool over Ben Affleck. He was good, but so were a lot of the actors. They all excelled the best they could with the material and direction they were given. And, a coming-of-age story about family dynamics, compassion, patience, and love is a nice film for the holidays.

The Tender Bar will be available in Los Angeles and New York theaters on December 17, 2021, in theaters nationwide on December 22, and available worldwide on Prime Video on January 7, 2022.

Review: ‘The Way Back’ Hits Home for Ben Affleck