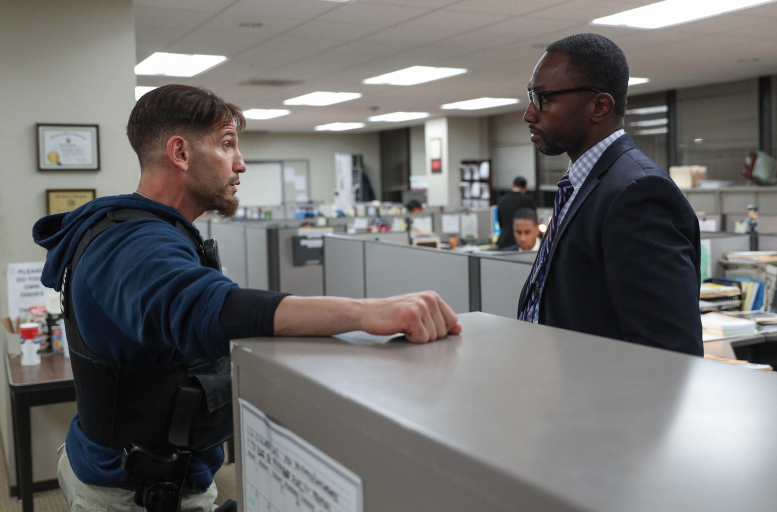 Here is an accomplishment of television helmed, yet again, by David Simon and George Pelecanos. If David Simon stays talking crap on Twitter, well, that’s because he deserves to.

The new project by Simon and Pelecanos — alumnae from the critically-lauded HBO series The Wire — explores the life of Wayne Jenkins, a Baltimore police officer whose Gun Trace Task Force was charged with crimes ranging from tax evasion to out-and-out battery and assault of Baltimore’s citizens.

The series’ frame narrative is largely a federal investigation into the task force by Special Agents Erika Jenson (Dagmara Domińczyk) and John Sieracki (Don Harvey). They have been tipped off to the unit’s activities based on an unrelated investigation into fentanyl overdoses and the product’s source. In a fashion, we’ve come to expect of Simon, a former police beat reporter for the Baltimore Sun, and Pelecanos, an author of detective fiction, the story then follows all the twists and turns inherent to thorough investigation.

Besides this, the story, which spans from 2003 to 2017, but mostly takes place between 2015 and 2017, follows Nicole Steele (Wunmi Mosaku), an Office for Civil Rights (OCR) lawyer, as she investigates police brutality and efficacy in a world “after Freddie Gray.”

In addition, the series devotes much screen time to Jenkins (Jon Bernthal), the prime antagonist of the show, and how he became so corrupt. Though, in this show, “antagonist” feels almost too melodramatic a description.

Don’t get me wrong: Wayne Jenkins is the Devil. Yet the show refuses to lay the blame squarely on individuals. If anything, the series’ partial thesis statement may be that actions undertaken by officers like Jenkins are the logical conclusion to what their departments ask of them.

Wanna make money? Make arrests. No good arrests? Get bad ones. There’s a harassment complaint? We’ll have your back. The show indicts institutions far more than persons.

The series also investigates the effects of police brutality on public confidence in the court system.

Newly minted homicide detective Sean Suiter (Jamie Hector) can’t find witnesses to a case because no one wants to talk to the police. Later, the courts can’t find twelve Baltimore jurors unbiased enough toward police to listen to an officer’s sworn testimony. It appears that the BPD has irrevocably damaged its reputation.

In fact, We Own This City is very concerned with appearances and reputation.

Jenkins appears to be “good police.”

He gets good stats at work. He’s amiable as hell. He has a reputation for getting the tough work done and getting it done well. This reputation helps him when this or that person says he lied on a report. Says he planted evidence. Says he planted guns. Indeed, Jenkins has such a loose leash it appears he can get away with murder. And there are times we worry if that is where this story is headed.

If Jenkins appears to be good police, the show says, it’s because he does the “good,” performative work the BPD rewards. Guns and drugs “on the table” are good, because those are physical, quantitative representations of the “good work” the police are doing to stop crime. If some civilians get harassed, that’s only because an aggressive city requires aggressive law enforcement. If you’re not getting complaints, they say, you’re likely not doing your job.

Wunmi Mosaki’s portrayal of Nicole Steele, if the history of Simon’s work is any indication, will likely not garner the Emmy it deserves, but she — and Bernthal — deserve that and more. Early on, we see her caution new OCR lawyer Ahmed Jackson (Ian Duff) not to make the job “your everything.” What she means is, that the task they have of holding institutions accountable can feel Sisyphean. Almost useless.

According to her views in the pilot, the best thing one can do is watch the day’s progress roll back downhill and smile. And, of course, drinking helps. But as the series progresses, and as Steele learns the absolutely absurd levels of, if not corruption, then complacency the justice system has towards police misconduct, we watch her mentality change about the urgency of her work. She sees that something clearly needs to change, but what? And how? And who will be the first to take some meaningful steps?

In an introduction to Kate Chopin’s The Awakening, novelist Marilynne Robinson cited interrogative, rather than declarative, writing as the mark of mature fiction. We Own This City certainly presents, and leaves, viewers with many questions.

Of course, police need to be held accountable. But do consent decrees and body cams just cause them to “hunt in new ways” as activist Tariq Touré (Nathan Corbett) says?

If we do decide that body cams and monitoring groups are the way to go, where does this come from? Mayors and governors only have so many dollars to spend, and divesting from schools to police budgets might cost them elections.

And what about police abolition as a whole? The show only hints at it via Touré’s final scene, but even that is, it seems, not a cure-all. As the show notes, when BPD officers began an unofficial stop-work after the indictment of officers in the Freddie Gray case, crime in Baltimore spiked. What’s the point of police abolition if neighborhoods can’t or won’t come together to fill that void with an alternative, communal system?

If the show is forceful in one point, it is that the so-called War on Drugs has failed, and it is responsible for the fall of policing in America. The show seems to paint policing before the War on Drugs as an almost prelapsarian, utopian era.

I don’t buy that, but I certainly buy the idea that Nixon’s “War” turned cops from guardians into militarized warriors and poor neighborhoods into occupied territory. And, of course, in any act of “liberation” via military force, there will necessarily be collateral damage.

We Own This City is not an easy watch. You will need closed captions to keep track of who’s who and what they do, but you will feel grateful you did so. Yes, the show is slow. As a police investigation, it takes a pointillist approach to paint a grander image.

If you’re willing to risk watching a show made for adult consumption about pressing, complicated questions, however, you will feel rewarded. Not joyful, perhaps — I don’t think any David Simon show does “joyful” — but certainly rewarded. The show will remain with you long after your initial viewing in a way few shows do.

In the end, you’ll likely realize the truth in Hov’s line: “No answer to these trick questions.”

The Problems with ‘The Rehearsal’ Getting a Second Season