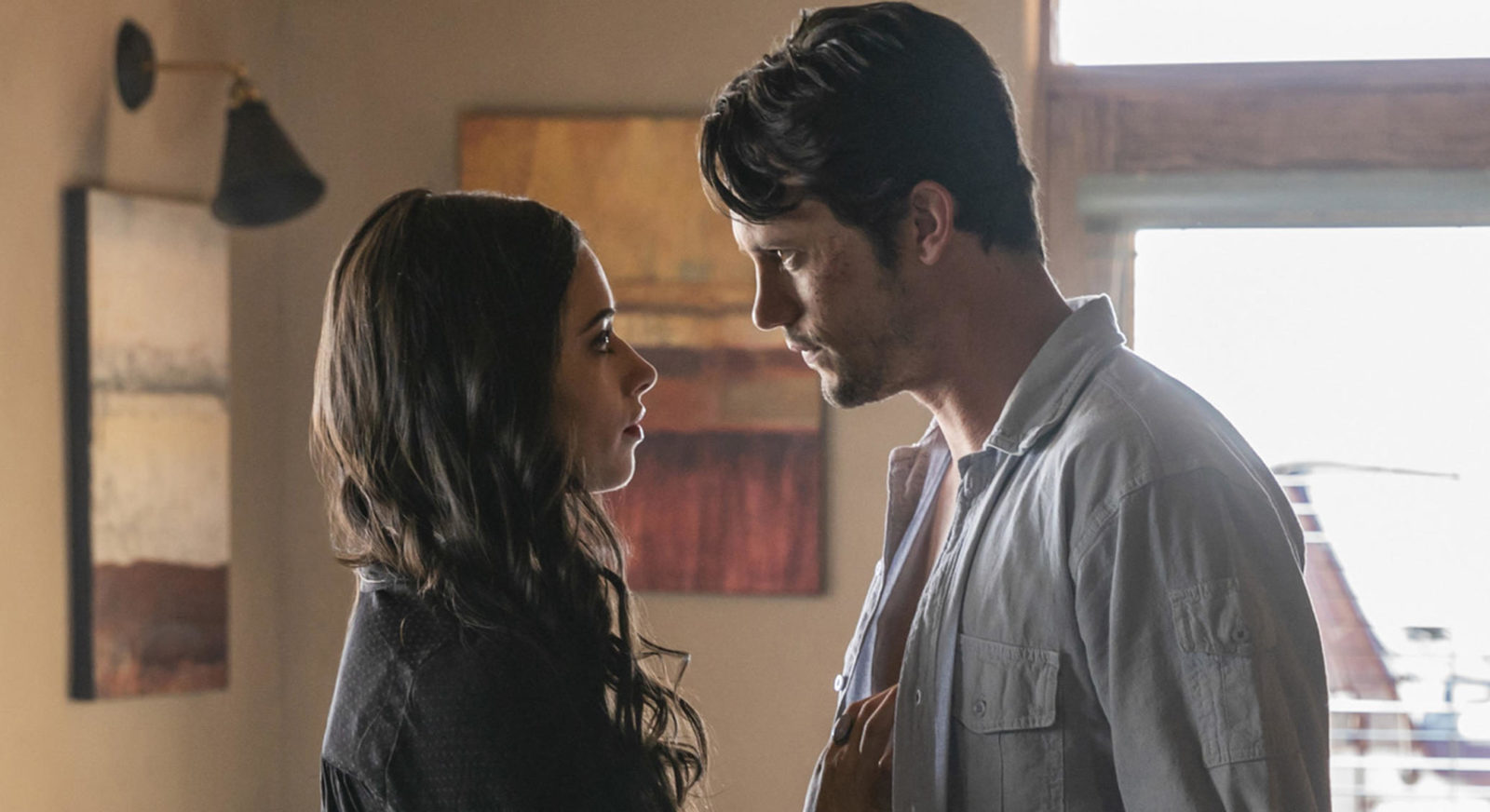 Liz Ortecho (Jeanine Mason) returns to her hometown of Roswell, New Mexico, after 10 years away. Her welcome wagon is an ICE checkpoint just outside town, where she’s racially profiled and berates the cop who pulls her over while she flashes her American passport. This is a bold opening act for The CW’s reboot Roswell, New Mexico that directly situates this interstellar love story firmly in the context of a divided America.

The cop who pulled Liz over turns out to be her old lab partner Max Evans (Nathan Parsons). She finds out her timing has brought her home on the weekend of their 10-year high-school reunion, a prospect that fills her with dread. Liz’s father Arturo (Carlos Compean) owns a retro- and alien-inspired diner, the Crashdown Cafe, and we learn he is undocumented. Liz thinks they both need to move away, to a sanctuary city. But her father has his American roots in Roswell, and he wants to stay. Arturo buried both his wife and daughter Rosa (Amber Midthunder) in the city and can’t leave them, especially since Rosa’s post-mortem reputation continues to suffer: Rosa was in a car accident that killed two young girls, and she was allegedly on drugs when it happened.

Liz quickly puts herself to work, donning a Twin Peaks RR Diner outfit — a clever nod to the Roswell storyline in both seasons two and three of Twin Peaks. Max stops by as Liz is closing up, in time to be there when a drive-by shooting hits Liz square in the chest.

As in the original series, Max is revealed as an alien being with healing powers. He brings Liz back to life and pretends she was never hit at all. The bullet hole in her outfit suggests otherwise. When Max’s sister Isobel Evans-Bracken (Lily Cowles) finds out what he did, the precarity of their situation in Roswell is exposed. Made worse by their renegade brother Michael Guerin (Michael Vlamis) who can’t seem to stay out of trouble.

The family dramas compound on both the Latinx and alien sides of Roswell, New Mexico’s plot as everyone is potentially exposed to the law and army. Max’s healing left a handprint on Liz’s chest her ex-boyfriend Kyle (Michael Trevino) spots and reports to General Manes (Trevor St. John), the soldier in charge of the alien crash site that put Roswell on the map.

When Roswell, New Mexico began its parallel of legal and illegal immigration vs. actual aliens hiding among us, I had to pause. Is this whitewashing the immigration debate? Or is it offering an apt metaphor? As the pilot continued, it became more and more evident that it’s the latter. Liz’s dad is at risk because he is Brown and undocumented. But Max, Isobel, and Michael are actual illegal aliens on Earth, and they have managed to escape notice in the very town people would be looking for them because they are white-presenting. This is a powerful statement on the nature of otherness and perceived citizenship in America. It’s a message we receive over and over again from our current political regime: Whites like Melania Trump’s family can benefit from so-called chain migration, but Latinx and Muslim immigrants are coded as threats to the (white supremacist) American national order.

Aside from this important issue, Roswell, New Mexico also models what consent culture looks like. Liz and Max have a new empathic connection because of how he healed her. She also finds out he has been in love with her since they were kids. Liz goes to kiss him, as you do when you find out the man who saved your life might be a great love too. But Max tells her if she does, she will also feel all his feelings for her and she won’t know where his emotions begin and hers start. Max wants her to maintain her boundaries, and Liz decides to wait until their link subsides before taking their relationship to the next level. The implication here is if Max lets Liz kiss him while they are so foundationally connected would constitute emotional manipulation. Liz wouldn’t be properly consenting. Instead of only decrying the evils of rape culture in horrific example after heinous example — which sometimes serves to reproduce rape culture as a result — we also need to begin outlining what is consent culture. And this scene in Roswell, New Mexico is a perfect example. Kudos to the writing room for this exceptional work.

While there is a great deal of Latinx and Native representation Roswell, New Mexico is lacking in Black representation so far. But since we are only two episodes in, I have hope that these characters will come and add even more to this powerful story about who belongs in America. And because I was so won over by the first episode I actually waited to publish my review until after the second aired just to make sure it wasn’t a one-off. It certainly isn’t. The immigration debate only deepens, as do other social justice aspects along with a quickly thickening plot. Like The CW’s Charmed, Roswell, New Mexico is openly feminist, and not in a performative way. Its queer characters are fleshed out three-dimensionally. And the social consciousness is on point. Maybe The CW should be responsible for all television reboots going forward.

I stopped watching the original Roswell by the second season because it had turned into a soap opera. Roswell, New Mexico, on the other hand, is a love story that reflects the current intense immigration debate that still has our government shut down. Liz even outright says she lost her government job in Denver “because of a wall.” If the rest of Roswell, New Mexico’s first season is this brave, we are in for a meaningful space ride.