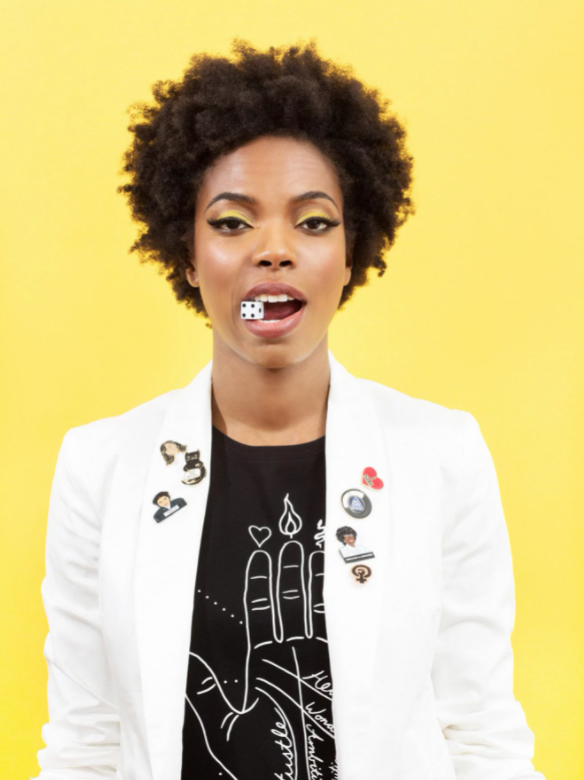 Sasheer Zamata’s having a blast playing Denise in Home Economics, a fresh representation of “social class” lived by millennials, who audiences don’t normally see portrayed on network television. Home Economics is about three adult siblings with diverse incomes living in San Francisco. BGN recently spoke with Zamata via Zoom about her new role and the power of comedy to create social change.

In addition to being an actor, writer, and stand-up comedian, Zamata is an artist ambassador for the ACLU’s Women’s Rights Project. “I think comedy is a really great way to break down walls,” she says. “People feel more comfortable when they’re laughing, and it’s easier to talk about social justice issues when you’re relaxed. If people feel like they’re being lectured, or talked down to, or they have to read something, they’re like, ‘Oh gosh…please don’t make me.’ But if you make a joke about it or try to find common ground, I feel like people are more open to listening.

“I’ve been labeled as a ‘political comedian’ but really, I just talk about myself. It’s a pretty self-centered type of job. I’m telling stories about what I’ve experienced in my life, and that includes my Blackness and being a woman. I’ll have people come up to me after my set and be like, ‘Whoa I’ve never heard that perspective.’ Or, ‘I’ve lived that, and I’m so glad you talked about it on stage.’ I’ve even had people be like, ‘I love Trump and I didn’t even know I was gonna like you, but I loved everything that you said.’ And that’s not even my goal! I’m not trying to get everyone on the same page, but I do want people to feel like they can understand what I’m saying. Hopefully that bleeds into their own life where they can have more mindful conversations and be more open to different perspectives and viewpoints.”

From Television’s beginning, American sitcoms have turned to comedy to process the American caste system. The 1950s reflected New York City’s white working class in The Honeymooners. In the 1960s, Green Acres took the glamorous New York city couple and transplanted them to a farm. The 1970s reflected views of Black life in Chicago housing projects in Good Times and the Upper East side of Manhattan, finding the comedy within The Jeffersons and upward mobility. The 1980s were a decade obsessed with money and class. The networks were filled with rags-to-riches sitcoms like Different Strokes and Silver Spoons. And Family Ties magnified the class division of the time within one family — with the liberal 1960s hippie couple dealing with their Reagan-era Republican son and materialistic daughter.

Home Economics steps into this tradition with ease, using humor to reflect how families are living with finances in the 2020s. Sasheer Zamata notes, “This is a cool way to talk about money, finances, and the relationships surrounding that. Relationships are affected by finances. I can see my family in this family.”

The writers room reflects the diversity we see in America, and the scripts don’t hold back from grounding the humor in actual reality. For example, the apartment that Denise shares with her wife Sarah (Caitlin McGhee) and their two kids Shamiah (Jordyn Curet) and Kelvin (Jecobi Swain) is tiny. It’s realistically the kind of apartment that Denise, a teacher, would share with her unemployed therapist partner who works with underserved kids in San Francisco.

Zamata shared her favorite part about playing Denise. “I love her wardrobe. The costume team is really authentic designing what we wear. Denise and Sara wear thrifted stuff or things that were inexpensive or gifted. She’s very crystal loving, talking to the moon, an energy worker, just like me. I love that she’s kind of a grounding unit for this family. She’s the voice of the people watching the show, helping the audience navigate what’s going on with the story.”

Each episode title has a price tag attached. “I think that’s a fun thing that the creators came up to kind of just remind you, this is about money. We’re going to be talking about money in this show. And it’s funny to see either how cheap the thing is or how expensive something is depending on which character in the show bought it. Connor bought the bouncy house, definitely expensive. Sarah bought a book — that’s going to be pretty cheap.”

Zamata went to the University of Virginia, and when she was in New York she studied and performed improv at the Upright Citizens Brigade. When asked what was the most impactful part of her education, she reflects, “At UVA I studied theater, and they didn’t have concentrations at the time so it wasn’t like I was only doing acting or only doing directing. I did everything. That was immensely helpful. I had to be a stage manager. I built sets. I did lighting. I also directed. I also acted. I also wrote plays. That range really helped me understand the whole scale of a production. In TV production, knowing that everyone has a really, really important job and it’s not just the people on screen who are most important is key. Everyone’s working their hardest and is very talented, and that is why we come up with a great product that people enjoy. The theater program at UVA really was a great education into knowing how to appreciate other people’s roles and what they do. I want to shout out the cameraman because I’m like, ‘You guys gotta make me look good,’ you know. And the DP really gets that lighting right on me because I’m darker than everybody else here and that’s a different skill. If they do it well I appreciate it. If you’re shooting an ABC show, everyone is here because they worked really hard for years, so I show my appreciation to every single role because I know it’s important.”

We reflected on the importance of diversity in writers’ rooms and asked if there were Black writers working on Home Economics. “Yeah, there are,” she says. “That was actually something we talked about. After the pilot we were all like, ‘It’s really important that we see ourselves in the writers room.’ So there’s Latina writers, there’s a Black writer, there’s LGBT writers, there are moms in the writers’ room. We want to make sure that these storylines are understood and actually reflected. The creators really did a really good job of making sure that’s what we got.”

The conversation ended with asking Zamata how she’s experiencing joy these days. “What a nice question!” she responds. “Nature. I went to the desert over the weekend. The Yucca Valley. It was so nice to be outside and see the stars and howl at the moon.” She laughs. “I just moved to a new house. I’m surrounded by trees, and it just feels nice to be able to step outside every day and just feel the earth under my feet. Now is the time where I’m trying to really appreciate that.”