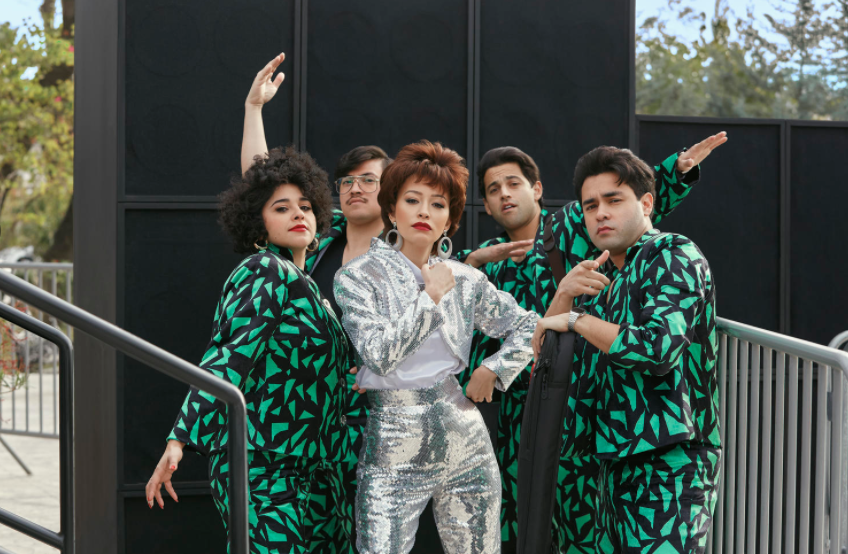 Suzette and AB are rushing to make sandwiches for the family as they stress about the Tejano Music Awards. The family is ecstatic to hear that their album and song have been nominated. Suzette is sure that Selena will win, but Selena doesn’t want to get her hopes up, even though she already has a design ready for the night. I won’t lie, I’m distracted by the shoulder pads on the two ladies. Was it that bad back in the ’80s? I tore mine out on my church dresses in the ’90s.

Abraham begins the work on talking to promoters and club owners to book the band. He gets the band on Johnny Canales’s show, since he is producing their next show in Matamoros, Mexico. The performance will be live, which means bigger speakers. Selena decides that she must learn Spanish so she doesn’t sound like a tourist. I feel her. AB didn’t get new amp but a drum machine that no one is excited for. Selena’s telenovela Spanish is driving the family crazy. She does her best to convince her dad about singing songs in English. Abraham agrees for one song, only if she can get “Singer of the Year.”

Suzette opens up to Selena about her drumming skills. She knows that she can’t keep up with the mainstream pop genre that AB is trying to get them to do. Selena lets Suzette knows that she is nothing without her sister there to play the drums. The group prepares for the awards by getting their clothes and van ready. The night of, Selena is nervous and isn’t ready to make a speech. Inside she meets her idol, Laura Canales. She thanks her for paving the way and asks her for advice. Laura tells Selena to be everything she thinks she is and not listen to anyone else. Unfortunately, the group doesn’t win record of the year, but Selena wins female vocalist of the year!

In Matamoros, Mexico, the band prepares to perform for a few thousand people. Abraham asks that questions asked in Spanish stick to “yes or no.” A young girl, Gabriela, working at her family’s restaurant, struggles with getting off of work to be able to see Selena perform. Her father inspires her to rebel against her family and go to the concert. The group begins by performing an English song, but the crowd doesn’t enjoy it, so Suzette gives AB the signal to switch to “La Bamba,” which the crowd instantly starts cheering. Gabriela surprises Suzette by informing her that she wants to be like Suzette, playing the drums, and asks for her autograph. Suzette gives Gabriela her own drumsticks. On their way home, the trailer becomes unattached to the car and makes it way down the street.