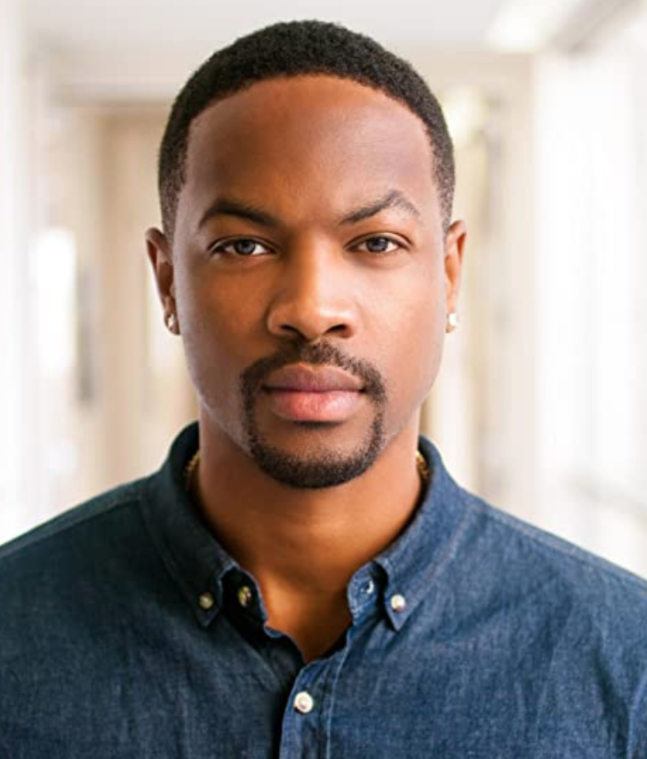 Twelve-season NFL quarterback Kurt Warner is the only player never picked in the draft to have been named the Super Bowl’s most valuable player. He was also part of two Super Bowl winning teams. American Underdog is the inspirational tale of his journey to becoming one of the most respected football players in the league. Ser’Darius Blain (Jumanji, The CW’s Charmed) plays Warner’s best friend and college teammate, Mike Hudnutt. BGN spoke with Ser’Darius Blain about the movie on Zoom.

Did you have to do any football prep to play your role?

I had prior experience growing up playing football, and I’ve done a football project or two. While we were shooting we got an opportunity to practice with the stunt performers. We’re all ex-pro and college players, so everyone brought a lot of energy to the movie and made it look believable. I got a chance to play some for a couple of weeks before we started, but I was coming off major knee surgery, so I probably shouldn’t have been playing. They did a really good job of hiding this big mechanical brace I had to use the entire time. I was determined to get out there and do as many stunts as I possibly could myself. So, that was fun.

Brave or stupid one or the other.  I usually wade in the middle of the two.

You’ve done a few biopics in your career. How was it for you to dive into this true story?

I’m a fan of paying homage to things that lift people out of dark places, and I’m always thrilled to tell someone a story, especially when it’s uplifting like Kurt and Brenda Warner’s story. We had the opportunity to have them on set and had their full support and blessing throughout the entire process. I got a chance to bond with them as well. I’m a huge Kurt Warner fan. When I was a kid back in ’99, I watched him lead the Rams to the Super Bowl and just was in awe. I did not know all of this backstory was included in that journey. I tend to be drawn to people who have very courageous and humble beginnings like this. I love people who have been through something in order to to achieve their destiny. It was a very multifaceted, cool project for me to be a part of. Then to get to catch passes from Kurt on the sidelines? That was just really fun.

Sports like football can bring people together from different backgrounds. It’s unusual that your character Mike would be great friends with Kurt. Did that aspect of diversity draw you to playing this role?

The funny thing is that my character is actually a white man in real life.

Yes! So that intrigued me from the beginning. [Director] Andrew Erwin was like, “Hey, you know I want you to play this character.” I looked Mike Hudnutt up, and I was like, “Oh, well, that can’t be me. They must have the character name mixed up.” So, I started looking for other people, but they’re like, “No, no, it’s this character.” Mike Hudnutt became an amalgamation of all of the people who inspired Kurt to stick with football and remind him that he was great throughout his life.

But yes, of course, I love the idea of the diversity of teammates. I played basketball growing up and had friends from all different socioeconomic statuses and races and creeds and religions, and it gives you respect for the game. It also gives you an education on all those different backgrounds. We all have some sort of commonality while we’re here on this Earth. Otherwise, we’d be here one person at a time if we didn’t actually meet each other. I think that’s the beauty of this story, as well. It wasn’t just a man with a miracle arm. It wasn’t just the love of football. It wasn’t just family. It was the combination of all those things together, and I love that. Race and money — none of that stuff mattered at all at the end of the day. What mattered was support, unity, and faith.

You started Top Shelf Getaways, a concierge service during the pandemic. How’s that going?

COVID is throwing a wrench in everyone’s plans for the last two years. I’ve still been able to do the company. but I’ve kept our groups small and private in the interest of public safety. We make sure that everyone is vaccinated and that everyone gets tested before and during the trip. And to this point, I’ve been able to take over 300 people out of the country in the last year and not one single positive COVID case. We will reserve an entire room block or an entire boutique hotel with a private car service everywhere we go. If we do go somewhere public, it’s the back room of a restaurant or a private room at a club so that we can still maintain a distance.

I started the company because I had the opportunity to travel doing the movie The Last Full Measure in Thailand. While working on that film, I realized in a moment that my priorities were all messed up. We live in this super capitalistic society where what you have is more important than the character of your heart. When I went to Thailand, I realized it was the exact opposite. There was a social currency there that I’d never experienced anywhere else. There was a vibrancy in the air. What you have in life there is predicated on how you treat people — your relationships with human beings. Your next-door neighbor has rice, and your other friend has the vegetables, and your other friend has meat. It behooves you all to be kind to each other so that you can all create a meal.

I think life is about sitting down and dining at tables with each other and having full-on conversations. That’s what Top Shelf Getaways became about — trying to heal people from the inside out. Get away from your stresses for a moment. Learn something about another country, and learn something about yourself in the process. There’s a certain kindness that comes with traveling as well. It brings out the best in people.

What’s bringing you the most joy?

My mom beat cancer last year, and my son is growing like a weed. I am just so focused on creating as many memories as possible because those are things that we have to live off of in our valleys. So family brings me the most fun and joy — and good food.

American Underdog is playing December 2021 only in theaters.