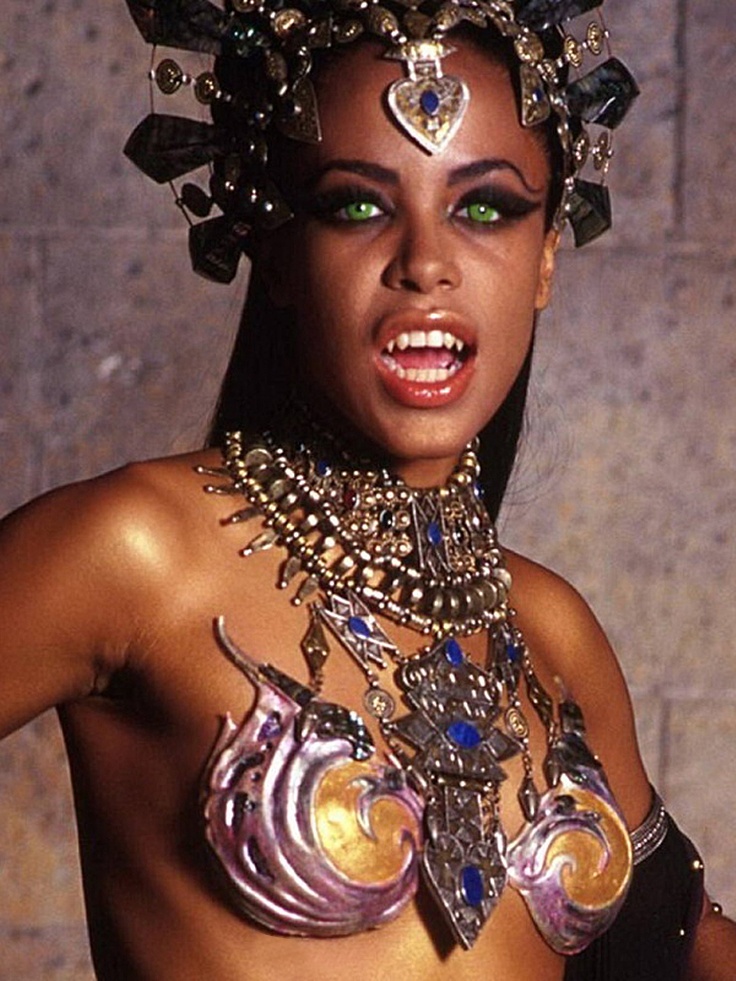 I rewatched 2002’s Queen of the Damned so you don’t have to. You’re welcome.

Picking up where the Tom Cruise, Brad Pitt, and child Kristin Dunst’s Interview with a Vampire left off, the Queen of the Damned is the third of Anne’s Rice’s vampire books, and its supposed conclusion until her quest for money usurped literary brevity. Starring Aaliyah as the titular character, this was supposed to mark the beginning of her crossover into movies, having already secured the role of Zee in Matrix Reloaded and Matrix Revolutions. Aaliyah passed away 6 months before Queen of the Damned was released and the movie is dedicated to her.

This supposed horror movie starts with the voice-over narration by our antihero the vampire Lestat, played by failure to launch actor Stuart Townsend, awaking from his century-long slumber and deciding to become a rock star. At the press conference for his well-anticipated (?) concert in Death Valley, he publicly challenges all other vampires to reveal themselves. After dealing with music journalists, he cools down by climbing up a wall, then devours two groupies. This is all within the first 13 minutes.

Cut to different voice-over and the introduction of Jesse Reeves, played by Marguerite Moreau, from Wet Hot American Summer fame. We see her creepy dreams (or is it a memory?) of being a child at a sexy-strange adult house party and her Aunt Maharet (the timeless Lena Olin) bleeding tears saying she has to be sent away. Currently, Jesse is an apprentice at the Talamasca Center for Paranormal Studies. We know this because they write it on the screen since we would supposedly be unable to decipher that this is a mystical MI5/Oxford (which I wish was real so bad…and if it is please recruit me to your organization). Wearing a bejeweled blazer, as one does for Ph.D. doctoral defenses in psychic studies, she learns yes vampires exist, Lestat is a vampire, we are looking for the original vampire, and the Talamasca has the diary of Lestat, also known to us in non-movie land as the book The Vampire Lestat. 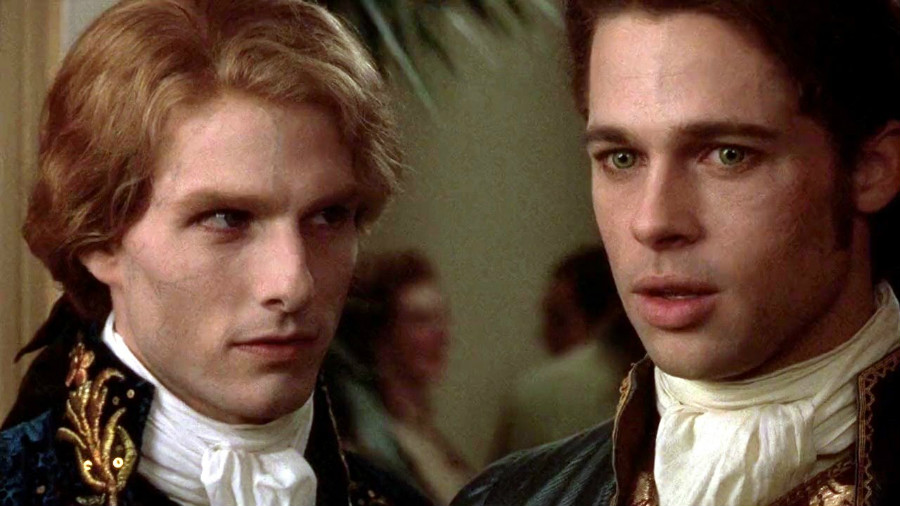 Some much-needed background. This movie purports to be the last book of Anne Rice’s vampire trilogy; Interview with a Vampire, The Vampire Lestat, and Queen of the Damned, of which, until now, only the first was made into a movie. Therefore to explain all the numerous players, relationships, and intrigues, it attempts the impossible feat of sneaking book 2 into movie 3. Cut to the late 19th century. We know this because of old-timey clothes and the voice-over narration (again?!!). Enter Marius (Vincent Perez) a vampire from 16th century Italy, who kidnaps Lestat to his island lair, where we watch him make the vampire Lestat (get it?). Lestat then learns what the vampire rules are; Vampires must remain hidden from the human world, have super strength, and magical violin playing skills. We have to know what the rules are so we known when they are broken.

While isolated on vampire island, Lestat practices his magical violin playing which causes a dark force to lure him into the hidden catacomb. There he sees what looks like marble statutes but, while it is unbeknownst to us at the time, is the King and Queen of all Vampiredom, the damned. Lestat offers to show off his fiddling skills and Queenie offers her marble hand to wet his whistle. Lestat drinks magic elixir blood, and cuts to psychedelic trippy scenes of her, not as a statue, but Aaliyah in her glorious prime. Later Marius tells Lestat that he has drank from the original vampire and queen of their kind, Akasha, who hasn’t moved for thousands of years. Marius explains that she has no respect for life and is a just and bloodthirsty despot. What else are you gonna do when you’re Vampire Queen in ancient Egypt? To which Lestat taunts Marius about her choosing to move for him. In player hater fashion, when Lestat wakes up the next day Marius has ditched his obnoxious self, taking his statutes with him. Thereby forcing Lestat to figure how to be a vampire alone…we know this because we get more vampire David Attenborough-like voice-over narration.

Jesse decides to check out London’s local vampire bar, drops Marius’ name that she learned from Lestat’s diary, gets in over her head with some neighborhood baddies, and then Lestat saves her. Cue sexual death tension (is that even a thing?). Obviously, afterward, Jesse decides to peace outta London and roll to the Death Valley concert. 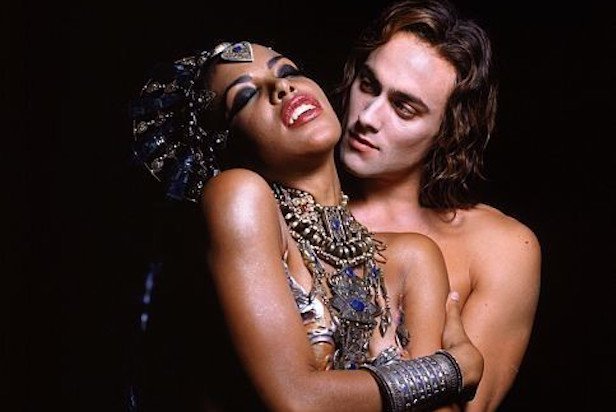 After ghosting him for 200 years, Marius pops back up in maroon velvet to chastise Lestat for revealing himself to the world. He explains that all vampires are gonna be gunning for Lestat for bringing them into the public. Marius then reveals to Lestat that his music has awoken the Queen of the Damned and she is coming for him. Enter the Queen, scene right. Complete in an early-aughts version of ancient Egyptian decor comes Aaliyah, looking amazing in the headpiece, arm tassels, metal neck, and chest plate, and sporting a generic “African”-crossed-with-snake accent; she is a 5000-year-old undead queen after all. On her search for Lestat, Queenie has somehow found London’s favorite vampire haunt. Since she is looking sexy as hell, a local vamp approaches to shoot his shot. In their three sentence exchange he is all (paraphrasing) “we gonna kill that traitor Lestat,” she is all “oh really homeboy?” then proceeds to rip out his heart with her hands, eat it, then starts setting vamps on fire with a flick of her wrist. And now we got ourselves a proper horror movie.

Or so we think.

More voice-over narration. Obligatory shot of Lestat in places only the supernaturals can go (i.e. a satellite dish on earth because of science, right?).

Now in LA, like any good goth groupie sporting a choker and too much eyeliner, Jesse finagles herself back into Lestat’s company. They quickly breeze through the oncoming war with the vampire covens. Jesse offers herself to Lestat to be his companion forever (Is this all making sense to you?). But like all good nerds, for Jesse, this is really a quest for knowledge. Lestat then gets all in his feelings because she doesn’t love him for him. Therefore he decides to make a kill in front of her to show the true nature of being a vampire. The point of this scene is supposed to symbolize their mutual attraction and rejection of each other…but it’s more a screenwriter not being able to part with some bs they wrote and need for filler.

What does this have to do with the Queen of the Damned? We’ve seen her for 5 minutes tops. Bring her back.

It’s the night of the concert. Angry vamps are prowling among happy concert-goers. Lestat flies in sans wires because he is a vampire. Concert scene…now why are we hearing the whole song? Was this supposed to spin off into other media? Why would we have Aaliyah in a movie and not have her headline the concert? Especially when she is the titular character? Nah stupid. Everyone in 2002 wants to hear heavy metal instead of Aaliyah. Now we see Marius with inter-generational sexy vampire crew in what looks like hippy couture through the ages. Freeze frame on Jesse’s Aunt Maharet from the dream sequence at the beginning of the movie. Remember her? Lucky for you I’ve read “Queen of the Damned” an embarrassing amount of times, so I can tell you that she is with the crew of vampire elders who semi-police their supernatural brood. She dispatches one of them to find Jesse before the war breaks out.

Song 2! They play another metal song, and thankfully the vampire war breaks out, with vampires rushing the stage. Vampire fight sequence on a concert stage. Lestat is surrounded. Then all of a sudden, vampires seem to be lit on fire. Queen of the Damn Aaliyah breaks through concert floor, grabs Lestat, whisks him away to a deserted beach, and proclaims him her new consort. Even though she lacks prior experience playing an undead ancient, Aaliyah does a decent job of it. Trippy vampire sexy scene with a bathtub filled with rose petals and blood-sharing, but without showing sex.

Jesse is now back at dream sequence adult party house. Jesse’s aunt Marate explains that she is an ancient vampire but, before she became one, she had a human child who is Jessie’s ancestor. Marate has been looking after this family since then. Okay, family is important, got it.

Lestat wakes up in post-coital bliss and can walk in the sunshine because Akasha’s magic blood is incredible. But, oh no, dead bodies literally as far as the eye can see, for the Queen has killed a villages’ worth of people. He’s not really being it. She is all “get over it, baby. Now we have a score to settle.” Do we?

Back to the party palace where the Couture Council is all “Akasha is crazy and we have to take her out for the good of Maharet’s superfamily, and thereby all humans.” So what started out as a narcissistic-vampire-vs-local-vampire-goths has turned into a war between the Queen of the Damned vs Vamps in Velvet to save humanity, got it.

Akasha shows up to battle the vamp council looking hella fly in a new metal chest plate. There is a brief war of words with Aunt Marate. And since she can’t have her boy-toy’s eyes roaming, Queenie demands Lestat kill Jesse as a show of solidarity. He appears to do so, and as a reward she lets him drink from her. Lestat, previously recognizing that Akasha is batshit, attempts to drain her, at which point the war of the vampire elders is on (Still not horror). Characters who are wicked important in the books, but have only two lines in the movies, start to die. Aunt Maharet drinks all the queen’s blood, somehow saving the vampire race. Aaliyah’s Akasha then has an ill death where she turns to ash which she, and 2002 CGI staff, make incredibly believable.

Lestat and now-vampiric Jesse go to visit her sexy bookish mentor at the Talmasca to drop off the diary of Lestat. Then they walk off into the London evening. Queue rock music. And scene. Yup, sounds like your typical horror classic.