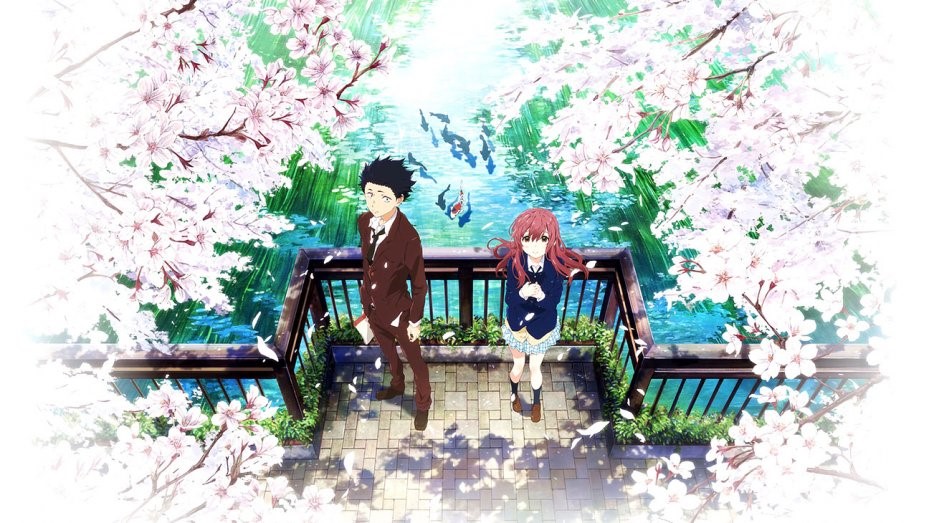 A Silent Voice is a Japanese anime feature, helmed by upcoming director Naoko Yamada, released in select American theaters Friday October 20th. It came in at number two at Japan’s box office its opening weekend. The film is similar to Your Name, a contemporary drama with a teenage male and female lead. . Naoko Yamada, only 32 years old, is one of the few female directors in Japan producing anime features and who many are touting as the next Hayao Miyazaki (Co-founder of Studio Ghibli).

A Silent Voice, based on the manga of the same title, is about how a 12 years old boy, Shoya, bullies a 12 years old girl, Shoko, who has a hearing disability. Once their older and in high school, Shoya confronts Shoko to make amends with her.

Yamada does a great job adapting the seven-volume manga into a 130-minute movie with excellent precision without harming the integrity of the story.

Because the film is called A Silent Voice, it is natural to conclude that the title is referring to Shoko Nishimiya having trouble communicating with others due to the disability she has. However, the main protagonist of this film is actually Shoya Ishida and the film follows his struggle regaining faith in people after being severely bullied beginning in elementary school. This film dives in deep—it is not a light movie about some kids picking on other kids and then, through some wacky childhood adventure, become friends.

The movie confidently takes departures from the source material clearly with the understanding that film is a different medium and the story may need to be adjusted to obtain the best results for the animation. Unlike the manga, the movie starts the story with a young man quitting his job, selling his belongings, withdrawing all of his money from the bank, and leaving the cash with his sleeping mother. He climbs onto the railings of a bridge, arms outstretched poised to jump a far distance into the water down below, until he’s startled by some children playing nearby and climbs back down to the road. Later, we learn this is Shoya attempting to commit suicide. Why? He says, “Well, a lot has happened”.

Transitioning to a flashback five years into the past, the first thing the audience hears is the guitar intro of The Who’s, “My Generation”. Interesting choice for a Japanese film considering the first song heard is American and not only that a very specific classic rock anthem. The next scene begins a montage introducing three adolescent boys doing what boys do, jumping into lakes, playing video games, and roughhousing.

This is my generation

It becomes clear to the audience that these kids are just trying to have fun without a care in the world. After the monologue, it’s revealed that one of the boys was Shoya.

We follow him into his 6th grade class, who’s being introduced to a new student, Shoko, and watch how the class responds to learning that she’s hard of hearing. At first the children get along with Shoko, but overtime become irritated with her and leave her in isolation. Students began talking about her behind her back and then the situation escalates to physical abuse, the main culprit being Shoya. He shouts in her ears, sprays her with the garden hose, and pulls out her hearing aids. Shoya is eventually busted for bullying Shoko once the students confess he’s been discarding her hearing aids. In a quick twist of fate, the students turn on Shoya and start bullying him because he’s a bully. He goes through similar abuse Shoko has gone through and is even betrayed by his best friends.

Fast forward to five years later, Shoya at 17 years old is now a loner. He doesn’t socialize whatsoever and avoids all contact, even eye contact, with his peers. He’s no longer the confident little boy he used to be, causing a ruckus and leading the pack. He’s now visibly timid and becomes physically sick when nervous. His clothes are always unkempt, shirt tail hanging out or tag sticking out from his collar, obviously no regard for his own well-being. He sits in class imagining what the other students are saying about him, “He’s always alone” or “Why does he even live”. The film depicts this isolation well, all characters’ faces are blurred in the distance, people’s bodies are not seen above their waist, and when in close proximity their faces are covered by a large blue “X”. This visually represents how Shoya has canceled them from his world. The only people faces we see are of the people he allows close to him, which includes his mother and his niece.

The film makes you question if he deserves this. Yes, he was a bully, but he was also a child who still needed time to mature. Shoya wasn’t granted the opportunity to learn from his mistakes and now five years later you wonder if the punishment is too great for him. You actually feel bad for the former oppressor because he’s obviously not the same person he was years ago.

This protagonist is an interesting and bold choice as most stories choose a likable character everyone can root for. But no, Shoya’s unlikable and practically the villain at the beginning of the film. He caused harm to an innocent person for no coherent reason. But you know what, this is real. In real life people are three-dimensional and everyone has done things in their past they are not happy about. So, I applaud the creators not following the safe, common route.

Shoya, as part of the amends he’s making before he commits suicide, visits Shoko for the first time since she transferred schools when they were younger. This is an important encounter, after all, what Shoya did to Shoko was the catalyst to all the bad that has happened to him – it’s “karma”. Shoko listens to what he has to say and, to Shoya’s surprise, what should have been an apology comes out as a request for friendship. If Shoko is open enough to hear him out, there’s a possibility he can be forgiven and if he’s forgiven then would he still need to take his life…?

The remainder of the movie Shoya attempts to do everything he can to rectify the pain he’s brought to Shoko’s life by restoring loss friendships from elementary school, spending time with her and their friends, and encouraging her so that she gains confidence in herself. Although Shoya cares about Shoko, you can see the desperation he has to resolve the issue at hand because his main concern is about finding forgiveness for himself. On the surface that seems like a bad thing, but humans can simultaneously care about other people and still place themselves first and it’s refreshing to see a film not shy away from that. However, in the midst of doing this, he also reconnects with the world and every time he makes a connection for Shoko’s sake he also creates a bond for himself and the X’s that once covered the individual’s face falls off.

Unfortunately, Shoya’s plan doesn’t play out as he wishes. The newly formed group of friends clash with one another and Shoya not strong enough to handle the altercation, again cancels everyone out of his life; except of course Shoko, the one person that can potentially save his life. What I like about this movie, is that It never makes Shoya and Shoko’s relationship romantic, it stays on task. Moreover, even when it’s revealed that Shoko develops a crush on Shoya, the main focus of the film still is focused the consequences of bullying and redemption.

Shoya continues meeting with Shoko on his quest to “make her like herself”. Shoko warns him that he’d be unhappy if he stayed with her. At the climax of the film, in a surprise turn events, Shoya finds Shoko on the ledge of her apartment balcony. Shoko runs to catch her and she leaps in an attempt of suicide, just in the nick of time he grabs a hold of her wrist as her body dangles. This whole time we’ve been seeing thing’s from Shoya’s perspective and hadn’t truly looked through the lens of the victim, Shoko. We finally have more of an understanding of what has really been going through Shoko’s mind. In this moment, Shoya learns the value of life and how it should be treasured. Ironically, just as he has this revelation, he accidentally falls from the ledge while getting Shoko back onto the balcony. He has saved Shoko physically, but where he has truly accomplished his goal is shown in the upcoming scenes.

The impact of the fall has put Shoya into a coma and Shoko attempts to do what Shoya’s been doing the entire film. She tries to restore everything she feel she has broken in his life. She steps out of her comfort zone and visits each of their common friends to bring them back together for Shoya’s sake. In doing so, this gives her a reason to live. Shoko has now achieved his goal, he has redeemed himself by saving Shoko; not just her physical state but more importantly her mental well-being.

When Shoya awakens, he says to her “I want you to help me live” and she agrees. Their past has finally been reconciled. This sets a new world in motion for the both of them, now choosing life. The film beautifully displays this from Shoya’s point of view. Engulfed in the festivities of the high school festival, surrounded by family and friends and showered with bright colored confetti; for the first time in a long time Shoya sees the world around him. The X’s peel off everyone’s faces to reveal smiles and warm joyful expressions; not the cold, heartless expressions of judgement Shoya previously seen.

This is an excellent film in my opinion, in comparison to all films and not only animated films. It’s thoughtful and avoids becoming cliché and generic. It maintains a level of realness throughout that’s very relatable to the true human experience. I highly recommend everyone see this, especially because of the topics on bullying and suicide that are addressed.

I am speaking on behalf of myself and my views do not necessarily reflect those of anyone else.