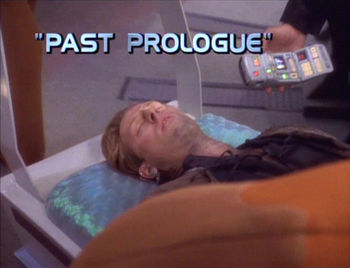 Past Prologue is the first episode, thus far, that made me feel a type of way. The story centers on Major Kira’s past and her association with known Bajoran terrorists. Kira finds herself in a moral quandary. Her friend, Tahna Los, seeks political asylum from Starfleet. He is part of the Kohn-Ma, a Bajoran terrorist group.  In the episode, she must decide where she stands either with her friend or with the Bajoran Provisional Government and, by extension, Starfleet.

First, here is why it wouldn’t. This episode is a bitter pill to swallow considering how terrorism dominates American culture now. Let’s set this episode in context. In January 1993, terrorism on American soil was highly uncommon. It would be a month later in February 1993, that America would be struck by a terrorist group. I’m referring to the 1993 World Trade Center bombing that would leave six dead and over a thousand injured.  It would be another two years, in 1995, when the US would experience the Oklahoma City bombing by Timothy McVeigh. (Say what you will, I regard that as an act of terrorism).

DS9 frames terrorism differently especially since we have a character that is a regular member of the crew. Kira is in a moral grey area in this episode. It makes that a difficult place to be in as she is with the provisional government and works with Starfleet. Not only that, she tries to justify her (unspoken) actions and that of the Kohn-Ma against the nefarious Cardassians. From her point of view, they were fighting oppression and subjugation. They are freedom fighters. Through Sisko as proxy, it’s as if we as the viewer are asking Kira if she is as bad as the Kohn-Ma. That she would do the things they have done. She rebuffs it but she understands it. Now we are shifting into dangerous territory.

It isn’t until Kira confides in Odo about her life during the Cardassian Occupation that things become clear. She doesn’t elaborate but she mentions she still has nightmares about it. We deduce from this that she did some horrific things. I’m curious about whether these actions were carried out against military forces or civilians or both. But does that make it any better? Kira is remorseful but still a terrorist. I can see how folks today would go from Team Kira to “she deserves what ever happens.”

Conversely, Tahna is not remorseful. He wants to keep up the fight and strike back at the Cardassians to free Bajor. His plan included even getting rid of the Federation. I see the Federation as another colonizing force. Sure, its seemingly more benevolent but the rules are still the same. Tahna launches a plan that involves an explosive device being thrown into the wormhole. I mean you can’t get more terrorist-y than that. At the last minute, his plan is thwarted but there is no mistaking it. Tahna is a terrorist and will be until his dying day. And, this person is, for most of the episode, someone Kira considers a friend. 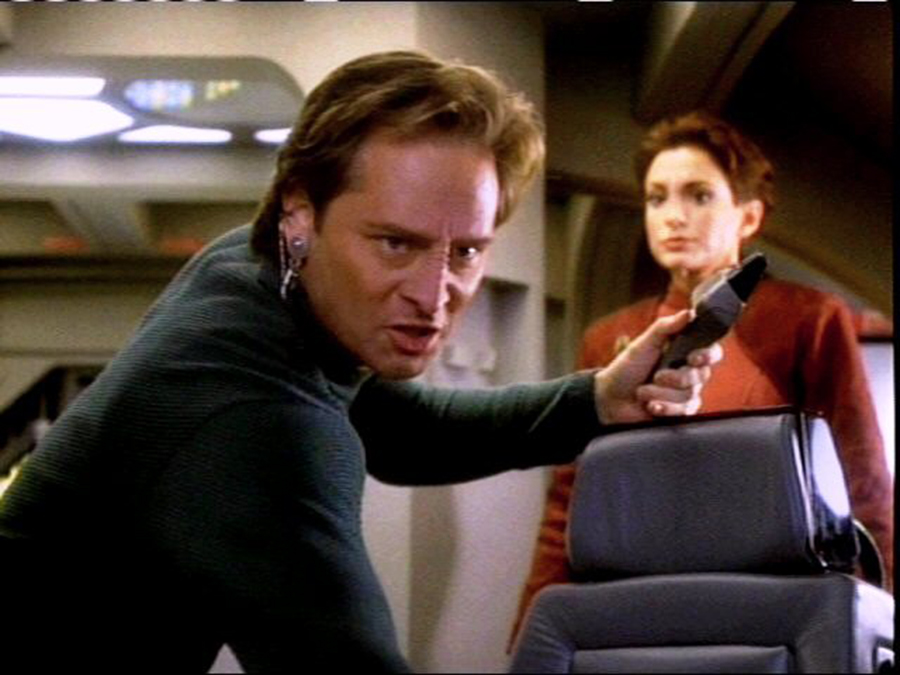 Secondly, I can see how this episode would work today. Again, let’s use Kira and her counterparts as an example. When it came to Kira, she was framed as a freedom fighter whereas Tahna was a terrorist.  In that way, the show tries to make a distinction but it’s a blurry distinction.  If you are part of a group that is being oppressed, then the people on your side are freedom fighters. If you are the group that is on the receiving end of these actions, then these “freedom fighters” are terrorists. It is all a matter of perspective. The episode sides with Kira but it doesn’t fully examine that position. As the viewer, we are supposed to side with Kira and be rightfully justified by backing her because she ultimately does the right thing and brings down Tahna.  Does that excuse the things that she has done? The things she struggles to speak of? Could we be okay with that if we learned she killed people?

We must remember though that at the end of the day, despite being Bajoran, Kira is a white woman. Tahna Los and the other members of the Kohn-Ma are white.  It is now ingrained in the American psyche that brown people, particularly Muslims, are terrorists. Brown people are most often the villain in shows and movies today. At the same time, we see brutal acts of violence perpetrated by white men and yet these are not labeled or widely accepted as terrorist acts. (Timothy McVeigh isn’t viewed as a terrorist by most). The way DS9 frames it serves to only mitigate Kira’s past actions rather than call attention to them and hold her accountable.  This is a similar occurrence today when dealing with white perpetrators of crimes. Suddenly, there are extenuating circumstances. Suddenly, there is more to the story and there has to be a reason to justify the actions.

We cannot escape the fact that Kira was good friends with a terrorist fully and completely aware of what he was doing. Is she not morally culpable as him?

Correction: Past Prologue is Episode 3 in Season One. I incorrectly provided a review of Episode 4 which is “A Man Alone.”