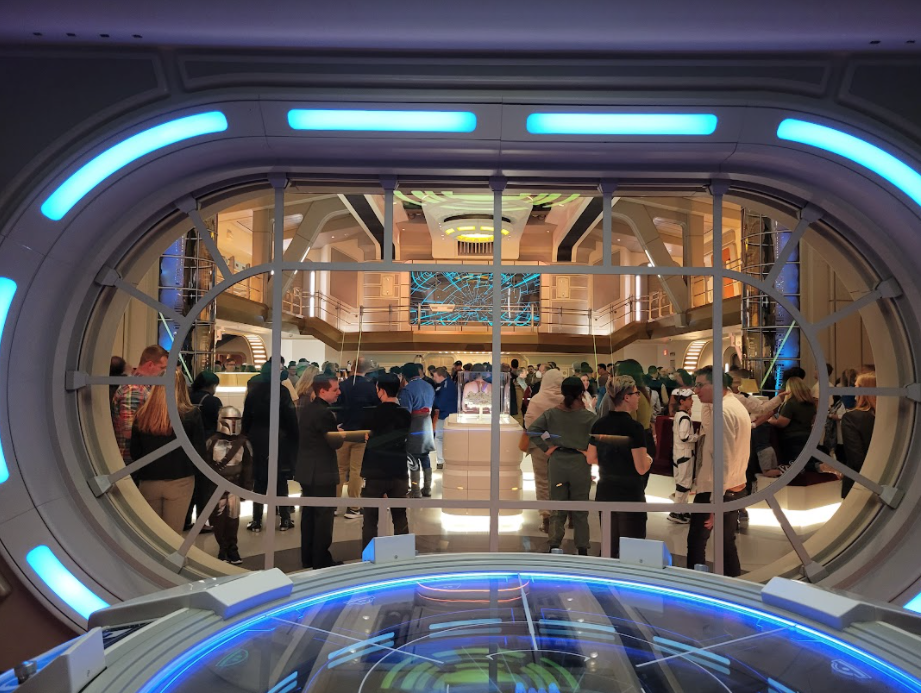 This past week I was transported to a galaxy far, far away, where I participated in the Star Wars: Galactic Starcruiser Experience! Opening March 1st, 2022, the Starcruiser offers an exclusive and luxury space cruise experience aboard the Halcyon, operated by the Chandrila Star Line.

With two days packed with interactive and immersive activities, from lightsaber training to a port call on the planet Batuu, the Galactic Starcruiser promises you an excursion you won’t soon forget. The collaboration between the teams at Lucasfilm Ltd. and Disney Imagineering also boasts a diverse experience for all fans, including people of color, women, and people who are handicapable.

Getting to the Launch Pod to rendezvous with the Halcyon starcruiser is an adventure in itself. Looking out the “windows”, you can see as your pod disembarks from the port and joins the Halcyon. You get deposited into the Atrium just behind the engine room. On this level is the Sublight Lounge featuring a holo-Sabacc table (a nod back to when PLANET was a gambling planet). One of the cruise activities is Sabacc training and tournaments, so be sure to learn quickly. There’s also a gift shop with merchandise you can only get aboard the Halcyon. And comm stations where you can get important info about your stay with your exclusive Disney Galactic Starcruiser experience MagicBand (Chandrila and Halcyon versions are available).

You’re given a Star Wars Datapad that will contain your schedule, communications, inventory, and missions during your stay.

Missions? Yes, you heard right. On an average day, the Halcyon is just a luxury liner, but something suspicious may be afoot on your journey. Each crew member, from the Captain to the newest engineer has a part to play in making sure the Halcyon cruise is event-free. They are not successful. It isn’t their fault though. The war between the Resistance and the First Order rages on, and I’ve learned intergalactic conflict doesn’t take a vacation.

The attention to detail is stunning. The halls look just like galactic quarters. When you enter the room, it’s full of Star Wars influences and high-tech innovation. There’s even a robot aide named D3-O9 who can be seen throughout the ship as well. You can turn it off, or you can help her with missions like negotiating to pass through the nebula safely!

The cabins are small because they resemble a cruise but are well designed. There are two cubbies in the wall, a pull-down sofa bed, and all of the linens you could need. There’s even a pull-out table with pull-out storage ottomans for seating. I had four in my party, and we were very comfortable, but we were also only in the rooms to change and sleep. They pack the entire voyage with activity.

I could write another entire article about the food. Yes, there was Blue Milk, which meant the yogurt and butter were blue. The Chardonnay was blue as well since that was the color of the berries produced on the planet. They hold formal meals in the Crown of Corellia Dining room which featured live performances from Gaya, the Twi’lek galactic superstar. She and Oannii delight passengers but may have their own motivations. You’ll have blue shrimp from the dense jungles of Felucia and beef and seafood native to the Wookiee homeworld of Kashyyk. For a more low-key vibe, the Sublight Lounge offered small plates after hours as well as signature cocktails.

On Day 2, we went on an excursion to the Blackspire Outpost on Batuu. Here we were able to construct a BB-8 or a Droid. We also got to use lightning passes for the park’s rides. Upon arrival, we got Chandrila pins that identified us as Halcyon guests and continued our adventure out into the park.

The exclusivity of the trip shines through. First off, as a Black girl nerd myself, I’m well aware of how these spaces tend to skew white. And with the price tag attached to the experience, it could be seen as something that most families of color wouldn’t be able to access. But I have to say I felt seen and respected. When you board the Halcyon, the customer service is superb. Everyone is there for the same reason, and everyone seems to be passionate and Fenjoy the experience. When going into Galaxy’s Edge, you could immediately tell the difference between those who were just trying to keep their kids busy and those who were on the Halcyon; it wasn’t just the pins that identified us. Not to say you have to be a die-hard Star Wars fan to get the most from the experience, but you do have to be willing to lose yourself in the world, and on the Halcyon, everyone is both literally and figuratively on board. Everyone is in on the mission, even the helpers and servers (shout out to Amanda aka Not Alexis!). And they aren’t afraid to improvise. My group was part of encouraging a budding romance between an unlikely pair. Everyone made the experience so accessible and well worth it.

It’s refreshing, fun, and one of the things that set this excursion apart. The other thing that was most important to me was the inclusion of women and people of color into the storyline. Again, both literally (Captain Riyola Keevan is blue!) and figuratively. Both the cruise director Lenka Mok and Gaya are played by Black women. One of Disney’s Imagineering crew told me that Black female musicians and songwriters were specifically chosen to craft Gaya’s catchy and meaningful songs. And there is diverse representation through all of the crew officers and staff. This may seem small, but there were a good number of people of color in attendance, and when the kids went to a dance party, the group had many little girls who excitedly had someone to look up to (and weren’t afraid to talk smack to the bad guy!). Making sure this experience is acceptable to all will be key in ensuring its ongoing success.

I think it’s important to mention some of the backlash that the initial preview had. Disney was aware and made changes based on the feedback. I will also say that I was invited to the press preview, but looking at the schematics, guests will get even more than we did. The quality of the rooms, the decor, and the food on their own are great, but it’s the immersion and interaction that push the experience into unforgettable territory.

The Star Wars: Galactic Starcruiser Experience is a bucket-list must for any die-hard Star Wars fan or someone just looking to get away and willing to play along. And even if you’re not as familiar with the media, there’s always a helpful smiling face involved that will make sure even us novices are having a great time. I highly recommend it.